This article is dedicated to one of my closest friends PRAKASH NAYAK who departed from this world all of a sudden two weeks back. He died of cardiac arrest. Good Bye my great friend Prakash....until we meet again...whenever and wherever it is !!😭🙏

Two reasons make me dare enough to do a write up on sugar, something everyone in this world knows about. First is that the very English word 'sugar' is derived from 'sharkara'  from Sanskrit, the Indian  language which  my mother tongue Malayalam has strong connections.

Second reason is that Indians are credited with the invention of sugar granules for the first time made from sugarcane juice. That was in the first century. I don't know whether this is the unfortunate reason for making India the Diabetic capital of the world now! Probably yes. Though a good percentage of Indians are vegetarians, most of them eat a lot of sweets it seems, looking at the number of such shops selling exclusively sweets all over India! India remains the biggest consumer of sugar in the world in volume but 'thankfully' the highest per capita consumption goes to Americans and Germans and others !!Then, who consumes the least sugar in the world? The north Koreans!!

Some time back I wrote an article about coffee which was well received by the readers. Here I am with another similar product from the kitchen shelf. You can be rest assured that I shall write about milk also if this also is found palpable to readers... 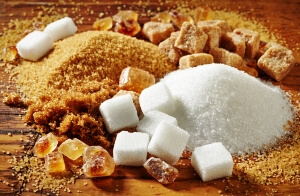 All Indian origins- 'Sharkara' to sugar....'Khanda' to Candy!Sugarcane origin is in New Guinea but the technology of making crystals from sugarcane is exclusively credited to ancient India since 350AD during Gupta dynasty. Until sugarcane was domesticated 8000 years back, honey was the natural sweetener of the world. After emperor Darius of Persia  invaded India around 510 AD, there is a specific mention about  'a reed in India that brings honey without the bees' in his chronicles! Science of sugar also traveled to Greece and Rome. Among written documents about sugar  the oldest is a mention in Mahabashya, an Indian document written by Patanjali in Sanskrit around 400-350 BC.It is mentioned about  sugar in recipes of rice pudding with milk and sweet barley meal and fermented drinks with ginger in it!!

Sharkara(Sanskrit) became Shaker(Persian) , then to sakkar(Arabic), to sucre in French and finally sugar in English within a time span of almost 1200 years!The process of crystallization of sugarcane juice was also exported or stolen to those countries initially and finally to the whole world.
The origin of the word 'candy' too is originally based on the Sanskrit word 'Khanda" meaning fragmented crystals for sugar candy.
Sugar travels to Arab lands and finally to Europe..
Arabs of old time were excellent traders. Not that I have opinion that they are not of the present time. Now also they are but they are facing stiff competitions from others. Science of sugar from farming to making crystals Arabs took from Persians, where they used it in medicines also but became masters of the field exporting to Europe. Marzipan, a moldable colored sweet made of sugar with ground almonds which is popular in Germany, Hungary, Italy  and elsewhere to this day has roots in Arabia of 650 AD.Sugar cane was largely introduced by Arabs to Europe in the 9th century during their rule in Sicily.
There is clear record of European soldiers returning home after crusades in 1099 with bags of sugar as trophy .The Spanish and Portuguese expeditions have largely contributed for sugarcane plantations and making of sugar in Canary Islands. The massive requirement of hard labor for this was solved by them bringing slaves from Africa! Sugar was considered 'white gold' among European nobility until 1500s.
Sugar travels to US.......The trade triangle!!
Sugarcane was introduced to US by none other than Christopher Columbus during the 1492 voyage. Again sugar was the prime reason for the notorious slave trade that brought millions of Africans to the Americas from 16th century.
What the historians call 'The Trade Triangle' is actually the story of African slavery whereby slaves were sent forcibly to work in US plantations, then the product of of their hard labor - sugar was sent to Europe to be sold and the money received from those sales were used to buy more slaves!!The history of sugar is not at all sweet to read.
Beet sugar....sugar art..
It was in 1747 that a German chemist is credited to have discovered sugar from sugar beets. Subsequently the first refinery was set up in 1802.Now the lead three countries which produces sugar from beets are Russia, France and USA.
In fact sugar is found in the fibers of all plants in various levels as a byproduct of the process of photosynthesis. Only two plants give enough concentrations to make crystals for our consumption-sugarcane and sugar beets. While largest crop in the world remains sugarcane, it contributes 80% of the sugar crystals produced in the world.
Sugar art of sculpturing art pieces with sugar and sugar derivatives are very popular in Europe and other places from the time of renaissance! 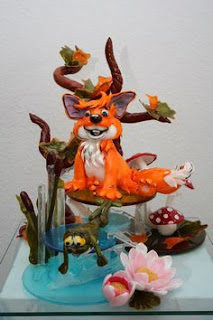 Why the 'but' comes....
The only taste humans have a crave from birth is for sugar. Probably that remains till an age when life spans end also. But those who are educated  know that excessive sugar is bad for health which can create health hazards. They say that sugar is a white poison!
Food manufacturers have identified all these facts but cleverly camouflage the word sugar using a different name than sugar as the first ingredient when they describe their products on packets. Sucrose,lactose,fructose,glucose.... are conveniently used by them to dupe all of us to this day! A 500 ml bottle of Coke or similar   contains more than 50 grams of sugar or over 12 teaspoons!!We are not probably thinking about how much sugar we are adding to our food when we use ketchups and sauces! Sweet to turn you on but.....
Images: Courtesy Google.
___________________________________________