Yasukuni Shrine at  central Tokyo is the memorial to Japan's war dead. It is a Shinto shrine founded in 1869 dedicated to souls of millions of Japanese who died for the country since then. But interestingly there stands a monument to an Indian as well which I could visit two years back.I could see myself many Japanese men, women and children come to the spot and bow in front of this man, about whom I did not know being an Indian!Later I could find that another Shinto shrine at Kyoto also is exhibiting a similar monument.
Ex Prime Minister of Japan Shinzo Abe on his visit to India in 2007 had paid a special tribute to same Indian in the Indian parliament.He also traveled all the way to Calcutta to  meet aging son of this particular Indian to convey warmth of Japan in person!! In spite of these news which were flashed few years back in the media, I dont think that most of the Indians remember name of such a person- an Indian revered in Japan to this day!
He is Radhabinod Pal.He was one among eleven Allied justices hand picked from eleven countries for the Tokyo Trials conducted post WWII to make trial of 25 Japan's top most war criminals. But why he is revered in to the extent that he was awarded later with highest civilian honour of Japan ? 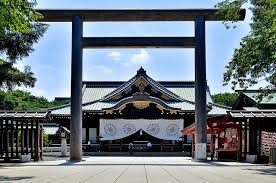 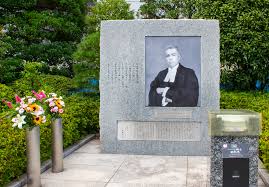 Background of Tokyo Trials....
Destruction of Japan was complete in 1945 as the world war II ended. On 15 August 1945 Japan surrendered unconditionally. The Allied nations decided few months later  to hold trial of Japan's war criminals which came to known as Tokyo Trials later like Nuremberg trials which was held specific  for the Germans.For this purpose the International Military Tribunal for the Far East(IMTFE) comprising of judges from 11 different countries-US,Britain,Canada,France,The Netherlands,Austria,New Zealand,USSR,China,Philippines and India.India was colony of Britain then.So also Philippines was occupied by US.
The western countries had primarily an intention of limiting to only to those western countries and China who had signed in the agreement of surrender of Japan.But India and Philippines were included either for more popularity of such a decision among colonized nations also or because a lot of Indians and Filipinos had fought and lost lives for their masters in the same war!While 2.5 million Indian soldiers fought for their masters around the world ,87000 had died! It is not an coincidence that exactly two years later in 1947 on the same day Japan surrendered - 15 August, that the British Govt chose to give freedom for India officially!!
Radhabinod Pal was a senior judge in the High court of Calcutta and Vice Chancellor of University of Calcutta, India when the British and American authorities picked him to join the panel of justices to make trial of 25 Japanese war criminals.
The Trials....the dissenting note...the final verdict
The Tokyo trials commenced on May 3, 1946 and lasted for two and half years. Originally it was aimed to conclude within six months. On the fateful day 14 December 1948 one judge after the other announced the verdict -guilty! And a lone firm voice thundered then-not guilty!!The court room stood silent for few seconds!!The lone dissenting voice came from Radhabinod Pal.
He was very hard on Japan and fully acknowledged the atrocities committed by the devilish Japanese army in China and elsewhere. At the same time noted that the trials was an exercise to Victor's justice and the Allies were equally culpable in similar acts during the war or even outside it. He was highly critical of US using atomic bombs in Hiroshima and Nagasaki. He questioned the right and eligibility of Britain and other western countries questioning Japanese imperialism when they themselves were colonists and imperialists!!He specifically was critical of Britain colonizing India and stealing the resources for centuries! His judgement concluded in 1235 pages. During the trial period could be due to his deliberations with judges from The Netherlands and France that they also made similar observations to the annoyance and discomfort especially of US and Britain.
Anyway due to the rules of the trial majority prevailed. All the 25 defendants were found guilty.7 were sentenced to death.16 to life imprisonment.1 each for 20 and 7 years in prison respectively!! 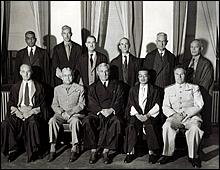 Panel of judges-Tokyo Trials
And.....
Pal returned to India to rejoin his services.He was elected to be in UN International Law Commission where he worked till 1966.Pal was awarded in 1966 Japan's greatest Civilian honour-First class Order of the Sacred Treasures.He passed away in 1967 at the age of 80.A number of Japanese books are written and documentaries were made on him and the subject.
Obviously Pal's dissenting judgement was a huge controversial historical document. While his detractors criticized him for being an agent of Japan war criminals, his admirers applaud his courage and fairness in giving out his anti colonial judgement.
Posted by Chacko at 09:51 5 comments: