It was King George V in 1911 who decided to shift the capital of colonial India-seat of Government- from Calcutta to Delhi.It was also decided to go for new Government buildings as appropriate to show case- for  Indian natives than others- the might of colonial India, the erstwhile  jewel of the British crown!They were eager to impress the Indian public with British superiority in science, art and civilization!Edwin Lutyens emerged as the chief architect of the project who picked up Herbert Baker, another professional architect and friend of his to complete the challenging task. That was in 1912.But strangely enough much before Lord Erwin,Viceroy opened the complex with much fanfare in 1927, the relationship between the two great architects had turned sour!!They were not even on talking terms till their deaths!!

However the giant, ambitious project was executed as per the detailed master plan which made Delhi proud of few magnificent buildings with European classical architecture, designed to outclass existing Hindu and Mughal structures but few years later came the controversy linked with Chausath Yogini, which still lingers with the parliament building.....that it is inspired from an Indian temple architecture!!It would be interesting to scroll down those anecdotes once again which are not known to most when an independent India celebrates her diamond jubilee of freedom....... 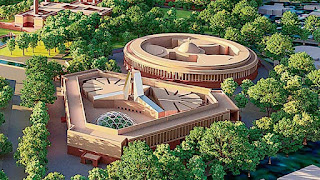 The background of selection of design team
Immediately after the decision was made to have a new capital at Delhi, a  town planning committee was formed to finalize details on the new city to be emerged.It comprised of Edwin Lutyens as Chief architect,John A Broadie  as Chief Engineer and GSC Swinton, an expert on municipal issues as chairman- limited to three members. This committee was approved by the King of England in 1912 with whom the trio had a meeting before proceeding to India. Shajahanabad, a 17th century Mughal city near Delhi was the site for  initial consideration which was later replaced  to Raisina Hill, a rocky outcrop those days.

It was agreed to pay Lutyens, 5% of the total cost of the mammoth project, which ultimately costed Rupees 13 crores, hundred years back.It was Lutyens who hired the services of Herbert Baker, a professional senior friend of his into the picture.It is understood that the town planning committee had considered Baker  before Lutyens as chief but for some unknown reason-almost a mystery- favored Lutyens as chief architect under  a condition to hire Baker's services by Lutyens so as to bring rich professional exposures of Baker also into the drawing board.

It was agreed between the two architects that Lutyens will design Government House- which later became Viceroy's residence and then Rashtrapti Bhavan(President's palace) as known today and overall layout of the city.Baker will design the twin secretariats- South and North blocks- and Council House   ( parliament building).

Both architects were known to have imperialistic outlook- tastes for European design styles over Indian architecture.I don't know how many Indians know the fact that particularly Lutyens looked down on anything Indian- people,culture or architecture.On persuasion of the Viceroy then Lord Hardinge -more could be a political tact than love for India- the architects finally agreed to add few Indian motifs to the buildings designed exclusively otherwise on western classical architecture.Red stone which was Indian, was decided to be used. Indian motifs were limited to perforated screens,eaves, canopies and the like.Elephant heads were placed on pillars.Even some of the motifs of Buddhist pagodas were used.

Lutyens' Bakerloo..
As the designs progressed, the rift in ideas of both architects started surfacing.Baker was known to have in his mind initially a design of equilateral triangle in plan for parliament building.But Lutyens made him change to circular as it looked now.It is interesting to note that the new proposed parliament building is in triangular in shape!! 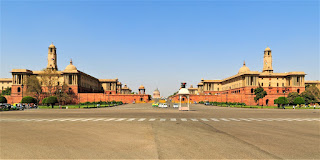 Lutyens wanted his Government House to be located at the highest point which was atop Raisina Hill so that it would dominate over other buildings where as Baker wanted his Secretariat buildings instead.Baker convinced Lutyens once and got his agreement but later Lutyens regretted his decision and wanted Baker to revoke it.But it never materialized.

Thus as the project progressed the major difference of opinion between them continued to reflect on the gradient of the main vista.As one looks at the Raisina Hill buildings from India Gate, only the dome of Rashtrapati Bhavan- not the main building- is seen as in the photo up.Lutyens wanted to avoid such a scenario at any costs while Baker insisted on it in spite Lutyens approached the King himself!It ended up in a professional ego clash which affected their personal relations-Lutyens' Bakerloo as he noted down later!

Finally the finished city was completed in 1931.The British could use the new facilities only 16 years out of 200 years of their rule  as India got the freedom in 1947.Later Nikolaus Pevner, the world famous British architectural historian aptly remarked about it as "Five minutes before closing time!"

Did the temple near Gwalior in the state of Madhya Pradesh(MP) inspire the architecture of parliament building by Lutyens and Baker?This temple built in 1055 AD devoted to Lord Shiva by a local dynasty stands loud even today atop a small hill. Chausath means 64 and the outer circular wall has 64 small chambers where as the parliament building has 144 pillars.As it is strikingly similar in looks,many Indians logically think that the temple might have given a spark to the British architects.

I have gone through the historical documents on this issue and found that neither Lutyens or Baker had ever noted down that this temple had inspired them.At the same time European architecture - something Lutyens and Baker had specialized in- never boasted of a circular building of repute other than Colosseum at Rome which was built in  80 AD.

Tail Piece...Edwin Lutyens the racist!Emily Lutyens the India lover!!
A bust of Lutyens was erected  inside the Viceroy's residence by Lord Mountbatten which is kept as it is in Rashtrapati Bhavan to this day.No doubt Lutyens gave India an excellent world class building but at the same time he was a known racist,I repeat,something Indians may not be aware of.An incorrigible India hater but a gifted architect.I don't know whether it is logical to keep a bust of Lutyens there any more.That is one way of looking at it. A good percentage of Indians themselves were racists among our own society hundred years back!That is another perspective.I would have removed his bust there or anywhere in India for that matter given an opportunity but at the same time kept his name written boldly on a plaque!!You may conclude with your own choice!!
In this context, I think I cant but write about Emily Lutyens, wife of Edwin Lutyens. Emily happens to be daughter of  Robert B lytton, Viceroy Of India 1876-80.While Edwin Lutyens hated anything Indian,strangely enough Emily loved India, Indian culture and mixed with Indians!She was an admirer of J Krishnamurthy,the famous Indian philosopher.She was a friend of Annie Besant and joined her Theosophical Society in 1910.From the fact that Emily became a strict vegetarian shows how much India had influenced her!In 1916 Emily was boldly conducting meetings in her London drawing room, favoring Home Rule Movement of India 1916-18 which set the stage of Independence movement under Annie Besant and Bal Gangadhar Tilak , much ahead of Gandhi who came to  the scene much later.
It is a non pardonable, paradoxical irony that Indians have forgotten Emily Lutyens completely, while the bust of Edwin Lutyens is kept in the President's Palace!!