PEPSI - HOW THEY OWNED THE SIXTH LARGEST NAVAL FLEET IN THE WORLD!

Undoubtedly the names of Coke and Pepsi remain the two most popular brands among soft drinks in the world from inception in 1886 and 1893 respectively.

Pepsi which was started by a small town pharmacist named Caleb D Bradham was selling his product initially under the name 'Brad's drink'. He bought the name 'Pep Kola' from a local competitor in North Carolina, US and changed the name to Pepsi Cola. PepsiCo had to go through many ups, downs and  bottle neck situations and became bankrupt at least once. Had to change ownerships but appreciatively  continued to grow along with Coke- rivals to this day! I am not here to tell more about them or their rivalry which is well known to all of us.

Here I am for a narration of how PepsiCo came to own a Soviet Naval Fleet! How Pepsi Navy all of a sudden became the sixth largest in the world in  1989 !! This is not fiction. This is real history. Before the fall of Soviet Union(USSR), they traded 20 warships of theirs with the American Beverage Company PepsiCo! The thirst for Pepsi cola among the Russians compelled them to do that once!! 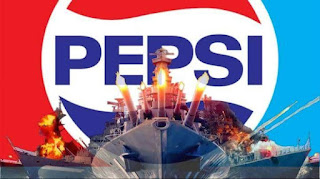 Iron Curtain period. In US it was the tenure of  President Dwight D Eisenhower and Richard Nixon as Vice President. That was also time when Nikita Khrushchev as Premier of USSR ,honestly believed that life under Communist rule was better than in Capitalist US and vice versa. Moreover the propaganda of USSR was that their Economic system is far superior to that of US and may overtake them soon! I remember reading free periodicals issued by USIS (United States Information Service) as well as 'Soviet Land' of USSR, both claiming themselves to be the best in the world! Indian Prime Ministers Nehru and daughter Indira Gandhi also were mesmerized by the Soviet's claim who were very often taking conducted tours in USSR and had tried to implement  'Socialism' in  India as well until when India took a U turn in late 90s and headed for Capitalism, though not fully yet!

President Eisenhower took a chance and decided for US participation in 1959 and to show case their products at Moscow. Thus many US companies in the Govt and Private sectors like Kodak, General Electric ,McDonald's, Pizza Hut, Baskin Robbins etc decided to participate. Pepsi also joined the delegation represented by CEO Donald Kendal, while Coco Cola decided not (see the photo below).

At the exhibition hall, on the first day during the inaugural function when Khrushchev visited the stall of Pepsi , he was offered  Pepsi to taste by CEO Donald Kendall in the presence of Nixon. Khrushchev fell for the drink immediately! He ordered the concerned to negotiate with Pepsi team and settle the order to make Pepsi available in the country. Exhibition was visited by 2.7 million Soviets.

The problem of currency surfaces...

Soviet's  own currency Rouble has no value outside the country and Americans expressed their inability to execute the order. The problem was finally resolved by USSR amicably. Americans will have state owned vodka named as Stolichnaya against payment to Pepsi! A sort of barter system. Thus US and USSR had a successful deal, could be for the first time during the iron curtain period. Kendall eventually negotiated a landmark deal to mass produce Pepsi in USSR.

One of the catchy advertisement of Pepsi those days was: 'Be sociable, Have a Pepsi". When the photo of Khrushchev sipping Pepsi came out in newspapers of the world , the wordings of the advertisement was changed to: 'Khrushchev learns to be Sociable'! The westerners are very good at wry humour to this day I admit. 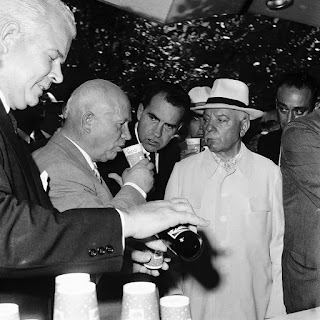 Khrushchev learns to be 'sociable'!

Pepsi gets a Soviet naval fleet!

Pepsi and the Soviets didn't have any problem and business flourished till 1980. That was the year USSR invaded Afghanistan. The American people for political reasons responded by boycotting products of USSR including Stolichnaya vodka! Pepsi had a real problem then.

The Soviets finally resolved the matter in 1989 offering a veritable navy owned by them. Pepsi agreed for the offer which included 17 submarines, a cruiser, a frigate and a destroyer!!In the same year tanks rolled into Tiananmen Square and the notorious Berlin Wall fell in Germany- events which shook the communist world just before the down fall of Communism in USSR itself  in 1991!!

(1)PepsiCo never had a navy of theirs in reality since they didn't take possession of the fleet. As the vessels were in a very old and unseaworthy conditions, PepsiCo ,as the fleet came to them to be owned ,immediately turned them over to a Norwegian Shipyard to be scrapped to raise the monies Soviets owed to them!

(2)In 2004 Kendall received the Order of Friendship from the Russian President Putin!