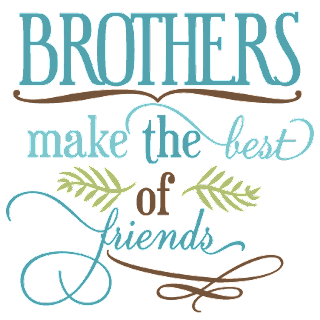 It is exactly a year since Thavo, my elder  brother passed away. Ravipuram is the location of cemetery in Kochi city where his body

was buried,63 being the tomb number. In fact my first posting

'Adios Chatten '-my first blog- was published in this blog soon after he died last
year.

Expect the unexpected! I did not, when we landed in Kochi in end April 2011 prelude to betrothal of Vinay, our eldest son.We had to get ready for the happy occasion and a lot of arrangements had to be done during the 2 weeks left.Sure, we can cope up within the short time left,I thought since Kochi is my home town plus my brother is always there to support in these matters.But something else was in store for us. Following  pain in the abdomen which was bothering him for sometime,after a series of tests, my brother was detected of lung cancer!!It was confirmed 2 days prior to the event.I  decided not to reveal to him or anyone else till the betrothal is over (except Geetha and Vishal.Vinay, who is a doctor played a pivotal role then and thereafter).

I had to go through very very difficult days ..although by and large nobody noticed,few close to me asked whether I am alright, could be seeing my facial expressions!Two days like I never went through in my life! During those two days in fact I was planning how to reveal the truth  to my brother and other immediate family members,how to get them(and myself) ready to accept the unexpected situation,how to cope up with turn of events - medically, financially, physically, socially.....The very next day of the event , I did as rehearsed myself - presented the issue and as advised by Vinay  actioned for immediate treatment  with the best expert in the state. He died six months later.

Curtain was drawn all of sudden,quite unexpected,to our intimate, unique and close relationship as  friends and brothers which spanned for 61 years  on 16 Oct 2011! Some of our relatives and friends used to call us ' aniyan bava , chatten bava ' - 'Like elder brother,like younger brother' after a popular Malayalam hit film.Few musings in this occasion.

What I didn't tell him ....during those 6 months

I did not tell him that he was already in the 4th (last) stage of his cancer when detected.Only  months are left,doctors  told me.Instead I preferred to give him (and others except Geetha, my wife) hope and urged to fight with the disease. He (or others) never knew that the end is near - till the penultimate day of his life. ( Isha , my sister told me later that he was trying to show her on that day a ' bye sign ' with his weak   hand while he was with an  oxygen mask and hardly could speak!)

I did not tell him that I have spent hours and hours in Internet to know  about his dreadful disease ever since it was detected till the last day...searching for any possible remedies and more to find out the state of mind of a patient in such cases.

I did not tell him about the 'helplessness'  I felt myself being beside him in the hospitals , especially when he used to suffer with severe pain ."As if someone pokes on a open wound with a pencil " , he defined his own pain   to me when asked once!I did not tell what he had told me to any of the kith and kin either then.

I did not tell him that I have quit smoking myself on the day his disease was diagnosed and confirmed.Over 40 years of being a moderate smoker I stopped myself overnight.Since then, not only that I did not smoke but I never had the craving till this day!

I did not tell him that I did notice his moist eyes when he saw me giving out an invitation card for the wedding of Vinay to a visiting relative while in the hospital room since I was running against time .Thereafter I never did that .....

I did not tell him about the sad demise of our common friend Gilbert who went through similar circumstances almost at the same time. Last we met him was in the oncology dept of Amritha hospital when I and chatten were there.I was the lone witness of a meeting of two close friends in a place where we never thought would take place!

What I have learned since then ..

I have learned that anything can happen to anyone at anytime.Life need not be fair to all . In spite of these bare facts , life is still enjoyable .

I have  learned that one of the most difficult things in life is unexpected death of a loved one.I never experienced this before.I  knew about it but never experienced.It is just terrible feeling at times when I realize that we will not meet again!

I have  learned that visiting a cemetery where your loved one lies once in a way is not a bad or mad idea after all .It is just a personal choice ...

I have learned that time will heal everything but can take a little more in some cases , mine being the later case!

I have learned that right interaction,mutual help,transparency .....among the immediate family members  will boost the confidence level of all to face boldly situations like this.  Life can be much better this way .

I have learned that quality of relationship is more important than quantity,if one has to choose.

What I would I tell him first , given a chance again...

"You are a popular man among friends,colleagues,neighbors and relatives . Tested and proven!!"

After he is gone,Kochi,the city where we are born and brought up, continues to change drastically. More and more of hypermarkets, multiplexes,international brands of junk food,fashion products,high rising sky line...the metro in the making ......everything is growing except the basic infrastructure which continues to be the same,more or less, when we were cycling in our school days the town which was then  limited between the north and south railway bridges!Kerala tries to 'emerge' without the basics-potable perennial water supply, uninterrupted electricity,drainage network,good roads,waste management , health facilities for all - like any other state in India !!

One more our common friend has left this world since then, unexpectedly ....

Summer,spring and rainy days have come again to Puthoor,KKP Road... Flowers have bloomed again at home  garden. Sparrows- Adakka kili-  are once again chirping around the house.The 'sherrygoa' mango tree keeps on giving fantastic fruits, if the insects let . Everything is getting back to track once again .

Except him!Sooner or later he also will be forgotten. So also me, when my turn comes, whenever it is ...paving the way for the next generations. "That's Life", as we used to say  on certain topics , while strolling at ' Mangala Vanam' at times, place  I have not visited since he left!

Ramayana says " Life and death , joy and sorrow , gain and loss....these dualities cannot be avoided . Learn to accept what you cannot change" . This is exactly I am trying to to do now .....