During my exposure in management in countries abroad, I always had a feeling that  we Indians are poor managers especially in marketing sector comparing to other nationalities, mostly from developed countries. I am sure that many of my Indian readers must be raising their eyebrows! I also wish that I am wrong but always I had a ready made excuse for it handy to satisfy my own ego- that we are only 70 years old since we became an independent country ....albeit it need not be necessarily a good one.

India is having a very old civilization in the world, if not the oldest, which is still live. While other similar civilizations-Mesopotamian, Mayan, Egyptian, Greek or Chinese  have ceased to exist or drastically changed beyond comparison to originals, India lives on. Pretty  rich in her pedigree culture but we fail to market India or to project our own treasures while we silently but eagerly accept the bad points of ours, when others want to project those for their own vested interests! I think this is a virtue Indians have to change....

Thanks to Covid onslaught on the world at large, India's 'Namasthe' 🙏greeting with folded hands prevalent in the country for the last 5000 years is now known to the educated world. 'Yoga' which is another exclusive product of the ancient India is very popular in the modern world now.

I am sure that all of us have heard of Aesop's fables. But have you heard of Panchatantra fables which was created in India earlier? The chances are that you haven't ,if you are not an Indian. And those Indians need not necessarily know that it is more than 3000 years old and the reason behind its creation!  But I assure you that this is more than interesting to know...because while Aesops fables are moral stories, Panchatantra fables are basic lessons for statecraft.. which can be extended to a good social life, business management and other fields to date!! 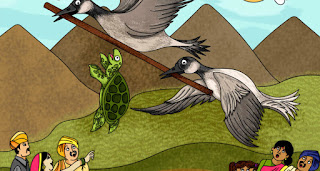 Fable ...much more than a story!
Fable is more than a fictitious tale. It is a story with talking animals as characters, conveying a moral advise or a good lesson. May be similar to fairy tales.
Oldest popular fable in the world is none other than Aesop's which is believed to be narrated by a slave story teller in ancient Greece around 500 BC. Children and grown ups equally can read and enjoy these fables- around 600 of them-  any day which came to us across distant and unknown lands and oceans carried by travelers and traders over centuries. 'The fox and the grapes' could be arguably the most popular of these fables which even gave us the phrase of 'sour grapes'! 'The tortoise and the Hare' essentially give us the teaching to us to 'never give up'! The hare, the crow, the lion, the mouse, .. all play various roles in these fables to deliver home the right message at the end.
Panchatantra fables....principles of statecraft
Panchatantra means  five (pancha) treatises or chapters (tantra) in Sanskrit , the ancient Indian language, one of the oldest living languages in the world, not forgetting that India has another living language- Tamil which is even older than Sanskrit!
These fables are composed around 300 BCE while some of the stories can be traced to Sanskrit text Rig Veda as back as 1500 BCE or earlier! The author is Vishnu Sharma who was entrusted by his king to teach his three sons on art of kingship and wisdom. The children of the king happened to be , it is recorded, dull witted and it made Sharma, the wise and learned teacher go to fables to illustrate human behavior to these children which he could achieve successfully in the end. In fact the stories teach not only the princes but people in authority as well to this day statecraft, strategy, moral conduct and lessons in power and the pleasures and perils of friends!!
Panchatantra bisected to detail.....
The five parts this can be classified into 1.The loss of friends 2.The gaining of friends 3.On crows and Owls(war and peace) 4.Loss of gains and 5.Ill considered action. Having considered the fact that it is all well thought of, even 3500-5000 years back, that too as statecraft is undeniably appreciable.
The first part features two jackals named Karataka (horribly howls) and Damanaka ( Victor)- with their names in Sanskrit- with a lion king and host of many other animals. It contains 34 fables. The second part has 10 fables which teaches the importance of friends and friendships in life. All the 18 fables of third section emphasizes that battles of wit is required as a strategy to neutralize vastly superior opponents' army! Crows are presented as good but weak creatures while that of owls evil for easy understanding of the three princes for whom primarily it was intended. The 4 th part which consists of 13 fables gives us the most noble advise: "A bird in hand is worth two in the bush"! And the last part is all about hasty decisions/actions or jumping into conclusions! It contains 13 fables. 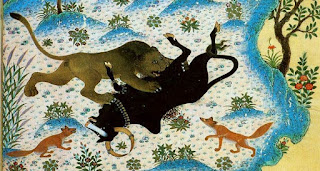 How Panchatantra went international.....
Persian king named Khasru was the first one to send his envoy to India to fetch a copy of the the Panchatantra fables from another country.it was thus translated in Pahlavi as early as 750BCE!The Arabs got its Arabic translation by Ibn al Maquaffa in eighth century which was named as 'Kalilah Wa Dimnah'.It seems the popularity of this version was popular among all the palaces of  reining kings in Arab lands which was taken to  Spain. It was translated to old Castilian in 1252 named as 'Calila e Dimna'.
Also it was translated to Ottoman Turkish, Ethiopic and Malay. It surfaced in Greece as 'Stephanites Kai Lehenlates'.Panchatantra was translated to Hebrew and Latin around 1480.It is not an accident that 200 versions of Panchatantra are available across the globe in 50 countries now!
Johannes Gutenberg...
How these fables influenced even the very epoch making events of history such as Renaissance and French Revolution is interesting. It is a wonder that Boccaccio the famous Italian writer of Renaissance time, La Fontaine an authority on French Literature of the 16th century, Grimm Brothers , the great German  Academicians- to list a few known- are all influenced by the teachings of Panchatantra...written by a teacher  exclusively for his not-so -bright student Princes 3000 years back in India!
Gutenberg's invention of the printing press in the 14th century ushered in an information revolution like internet did few years back in our era. In 1455 his first book to be printed in his press was the Bible. It is equally astonishing to me to know that one of the books he chose after that for printing was a German translation of Panchatantra tales as Das Buch Der Beispiele!!
And  majority of Indians- forget about others- may not be aware of these facts, albeit the stories are popular among them! That's why I said in the beginning that Indians are poor in marketing of their great values and culture! At least so far!
Illustrations: courtesy google
_______________________________________
Posted by Chacko at 09:40 14 comments: