I had been to Kochi-Muziris Biennale- International festival of contemporary art- Second Edition which recently concluded.Modern art works of paintings and sculptures exhibited there they say are of world class,inviting thousands from abroad but falls short of my poor tastes to enjoy!This has been my personal short coming always- conventional art I can enjoy but not modern art!! Art of Micheal Angelo, Raphael or Ravi Varma... anything conventional I can but modern art of Picasso or others it is difficult for me to understand,forget about enjoyment! But all the venues of the biennale seems to be hand picked which are unique...all have history of few centuries to be told but one among them stood out for me-CABRAL YARD.'Whorled Explorations' is the caption for the biennale but I shall write about an exploratory but epoch making trip made to Kochi (Cochin), over 500 years back which changed course of history!

Everyone who has gone through the basics of world explorations knows about Vasco Da Gama,the Portuguese navigator,who has been instrumental in finding a new sea route from Europe to India in 1498. No student of world history can forget him. But what about Cabral, in whose memory still a yard exists in Kochi,India? Cabral who was destined to influence history of Brazil and  India is not known in India the way Da Gama is for many reasons.I know that history could be boring to many but I have tried to make it more palpable..

Cape of Storms makes way for Hopes..
1488.Renaissance period in Europe. Portuguese explorer Bartholomew Dias makes the discovery of southern tip of South Africa and names it 'Cape of Storms' to match the difficult conditions prevailed to navigate.It took some time for the Portuguese King to understand that such a discovery could be a break through to find a new route to India based on which they renamed the tip as 'Cape of Good Hope' as is known to date....as a good omen.

India and the East were enchanting to Europeans from  day one of recorded history.Spices of Malabar coast of India especially pepper was a most sought after commodity for the rich there in spite they did not know where exactly Malabar coast is located.Arabs from the middle east who were good seafarers as well as clever traders- they still are-were the middle men for the transactions. Muslim Arabs not only had monopolized the trade route through Red Sea and Indian Ocean existed then, but ensured that christian Europeans do not venture out through their areas.

Among Indians although a higher level of civilization and knowledge prevailed,Hinduism forbid them for maritime adventures in high seas.Most of them being strict vegetarians,fishing and sailing was not a past time for them, one of the reasons why Indians hardly conquered out other lands even though they had the advantage of better scientific knowledge.The Dutch,French,Spanish,British all wanted to do it but it was turn of Vasco Da Gama to find a new route to India without touching the Arabs.He landed at Calicut,India in 1498.After a successful trip as a whole for his mentors, he returned to Lisbon in 1499.

Turn of Cabral..
Manuel I ,King of Portugal at that time, wanted another expedition to India soon after to consolidate what has been achieved in the first. It is assumed that Da Gama pleaded exhaustion from his trip and Cabral- Pedro Alvres Cabral is his full name-who was comparatively young,in his thirties was chosen.In 1500 Cabral with his 13 ships and 1200 men set sail for India.One of his ships was captained by none other than Bartholomew Dias of 'Cape of Good Hope' fame. The wind in Atlantic Ocean accidentally took him to present day Brazil in South America.He is credited with finding of Brazil. Leaving behind few convicted criminals who were taken with him in the armada,after few days Cabral successfully sailed back across the Atlantic to round the Cape of Good Hope and reached Calicut on the west coast of India He had lost few ships and captains including Bartholomew Dias in between in storm! 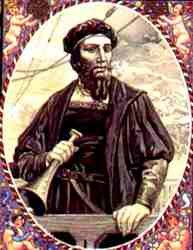 It was Cabral's intention to enter into a trading treaty with Zamorin, King of Calicut.He had brought much more valuable gifts for the king,not to repeat the mistake of Vasco Da Gama's which the King thought cheap.After the initial warmth the relationship between them did not go well. Arab merchants who were already there in Calicut saw the presence of Portuguese in conflict with their long term commercial interests.Brawls took place between them while the King sided with the Arabs. Cabral was forced to retreat.

Cabral moves to Kochi...
King of Kochi was not in good terms with King of Calicut. As such Cabral sailed to Kochi and befriended the King.'The enemy of my enemy is my friend'- their new relationship flourished well.Cabral could return to Lisbon successfully with his ships loaded with spices of Malabar.He could  get permission of the king to leave 30  Portuguese sailors-thankfully not convicted criminals- behind, when his ships sailed off! European domination and ultimate colonization of India for the next 447 years had kick started!!

Cabral was the first person to navigate touching four continents- Europe,America,Africa and Asia- for the first time which helped the Portuguese to colonize many countries thereafter. Cabral was welcomed back in Lisbon by the King as a hero although his expedition was sustained by loss of more men and ships.

Changing times....
It seems even now at least one of the European countries is in the hangover of the past.It is three years ago two marines employed by a  European commercial vessel fired and killed two Indian fishermen not far from the coast of Kerala, India. The vessel wanted to get away soon after the incident but could not since Indian Navy forced them to surrender and the culprits were arrested.The vessel was released later but not the marines.  They have pleaded that the firing was done by mistake and wanted the release of marines on payment of compensation etc.Thereafter they have been arguing that the the firing took place in international waters and hence to be tried in international court of law or on arbitration. They might have tried pressure and arm twisting tactics as well on India. The Indian Govt has taken to the court of law in India and wanted to try them as per law of the land.In spite a lot of pressures from that friendly country and EU,India has stood on its stand till date......And rightly so.
Photos-courtesy google
________________________________________________________
Posted by Chacko at 11:46 5 comments: