HIPPALUS,PERIPLUS AND MUZIRIS..... it is NOT Greek to me!

But for Sunday, I make brisk walk for almost an hour along with Geetha in the early morning. Mostly I do that at our regular place of nearby international stadium. Occasionally I also walk at Marine Drive, not far from my residence. At the dawn, walking on the interlock paved corniche by the side of sea against cool breeze is refreshing. Listening to either latest news and pretty old classic music as I walk begins my day well.Of course it is a luxury I could afford these days after my semi retirement.The sea views as I walk - from slow moving small motorized fishing boats to anchored leviathan modern ships at the port - it is feast to the naked eyes. The walk here also ushers a lot of thoughts in me.....

Kochi and places around which touches the Arabian sea is sleeping in history. It could be one of such unique places in India,for that matter in the world. Romans,Greeks,Phoenicians,Egyptians,Persians and Arabs used to visit this land from 1st century BC reaching by their ships for trade. Europeans came much later in the 15th century onward. They were all after spices, mainly after the king of spices- pepper which was the exclusive product of India those days. Saint Thomas, one of the 12 disciples of Jesus Christ is believed to have come to this place in 56AD in search of Jews already settled here. How come they all made it to reach ancient port of Muziris, hardly 30 kilometers away from the present port, in India from places as far as Aegyptus,Roman province of Egypt, thousands of kilometers away? Was it possible to travel by sea this far in wooden ships using wind as the prime mover without much navigational instruments or maritime knowledge around those days of King Solomon of Bible....anyone could doubt.

Yes, they did visit regularly. If you have read about Hippalus and Periplus, it can be certainly concluded so.But how come it is not taught in Indian curriculum about them or do they these days?-at least I don't remember having read about them while in schools. 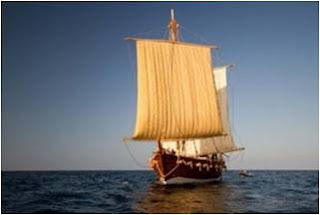 Languages of knowledge.....
While Geetha  and I were holidaying in Athens few years back, one of the  local Greek who befriended us in his broken English asked about job prospects for him as he was looking for a job in a bank in Qatar. Those days Greece was under tremendous pressure of economic crisis. I told him that good knowledge of English or Arabic or both is essential for that. Innocently I asked him why Greece is keeping medium of instruction of curriculum in universities Greek and not English to get the advantage of international exposure. His answer was simple, unexpected but thought provoking. "Greek is a language of knowledge from time immemorial. Why we should deprive ourselves from that?" Suddenly I remembered plight of Sanskrit, the language of knowledge of ancient India and how Indians were alienated from that language by foreign followed by Indian rulers. No doubt ancient Greece contributed a lot to scientific world esp. during Hellenistic era, I presume.

Ancient maritime history of mankind starts with India, China, Mesopotamia and Egypt. Navigation skills were known to them as early as 4th and 3rd millennium BC.In fact the word navigation is derived from the Sanskrit(Indian) word Navgath of Indus Valley Civilization time. So also the word Navy from the Sanskrit word Nou.

Hippalus
A Greek navigator, explorer and merchant he was, who lived in Alexandria, Egypt in 1st century BC. He is credited to have found out something which may sound silly now but  was epoch making in the world of  travel that time. He discovered the Monsoon wind for the west which was named after him.No doubt this is long known to Indian and Arab sea farers. Eventually this made navigators of those times to find a sea route from Red Sea to reach Southern parts of India-Muziris(Kerala),Arikamedu(Tamil Nadu) and other places in India in around 40 days! They navigated using the southwest monsoon wind to reach India and stayed there till the wind direction changes to northeast.Discovery of Hippalus wind can be considered to be on par with what Columbus did in modern history. Both changed history of sea faring and trade thereafter! 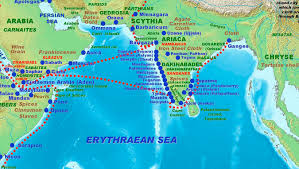 Periplus..
Periplus in Greek is a manuscript document that details various ports and related matters. Periplus of the Erythraean Sea-Another name of Red Sea known to ancient Greeks- is the first recorded document detailing travel and trade of the western countries with those of East such as Rome, Parthia,India and China. Documented in Greek as notes around mid 1st centuryAD,name of the author or compiler of such a document is unknown. However it is confirmed that it is written by a Greek merchant stationed in ancient Egypt.

Periplus confirms discovery of Hippalus wind and credits the new sea route to India to Hippalus. Periplus also details quite a number of old trade centers in Africa, Arabia and India as one can see in the map above which is created based on such details. It clearly identifies Muziris(Machuri) along with a host of trade centers in coastal India.

Author of Periplus, it is recorded, has noted a lot of info about ancient India and was under the spell of epics of India such as Ramayana.