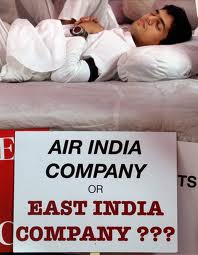 Last week a photo related to ongoing strike of pilots of Air India which was published in all Indian newspapers caught my attention . Photo of hunger striking  pilot with a ply card  -  Is it Air India or East India company?  Why this comparison?  Obviously East India Company stands for corporate abuse, exploitation and monopoly power  . Rather than about Air India , the current plight of which every educated Indian knows , my mind tangentially went to the famous/ infamous East India company (EIC)......Wants to share something about East India company which most of us is not aware of  or noticed ....from an angle of  a business executive having years of international business exposure.

The original vision
British East India company was formed in 1600 in the private sector. It was the first company to issue public stock, owned by few wealthy merchants in England,125 shareholders to be precise.The capital was 72000 pounds.The Govt had no shares, not even direct control.The primary intention of the company was not bad, it has to be presumed.To trade with India, China,Far East ....The company will have its ships,export goods anything saleable from England to these lands and take goods such as spices,tea,cotton,saltpeter(potassium nitrate -which is a must in making gun powder, which was abundant in China) from the east and sell the same in England with a good margin.The company got an exclusivity by a royal charter.The idea got  immediate recognition among most of the lead trading houses of Europe which culminated in formation of many similar East India companies -Danish, Dutch,Portuguese,French and Swedish- in the following decades -  a trend valid even these days.Once a business plan is found successful there will be a lot of copy cats.

The beginnings
East India company landed in India in 1608 while the Mughal empire was in power.But it was an empire already on decline. Early trading stations in India for the company were in Surat,Madras(Chennai), Bombay(Mumbai) and Calcutta  as permitted by Emperor Jahangir.The activities of the company grew rapidly.Company prospered . 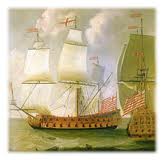 courtesy :google
A rival company from England
The sudden prosperity of the owners and the staff of the EIC invited competitions from others from England.By an act that was passed in 1698 a parallel East India company officially named the ' English Company Trading To The East India ' was floated under a state backed indemnity of 2 million pounds.The powerful stock holders of the old company quickly subscribed a sum of 315000 pounds in the new company and dominated the body!The two companies wrested with each other for some time both in England and India for a dominant share of the trade.The companies merged in 1708 by a tripartite agreement involving both companies and the state.Definitely a forerunner of present day corporate mergers , acquisitions and take overs !!

Transformation
The company became  favorites of the rulers to an extent  in 1717 by completely waiving customs duty for the trade.Share prices of the company shot up.Then how a business house which didnot have even an iota of malicious ambitions when formed became rulers of  India?

As the power of Mughals receded with emperor Aurangzeb, local rulers wanted more presence. And they quarrelled to each other very often. British who were in charge of the company in India then saw it as a threat for their interests mainly for the flow of business - procurement,logistics and export of goods to England.East India company took a strange decision unknown to any business house till then - to hire soldiers to keep peace .British soldiers came to India for the purpose,who recruited locals and trained them as well for the purpose. Using the military power whenever a dispute among the locals rulers resolved, the power of the company grew.The year 1766 was the turning point for the East India company.It was given the diwani  or revenue right for the whole of Bengal .Share prices of EIC rose up again in London. As years went company cleverly saw that disputes among the local rulers is good for them ..to grow ..to rule...Each opportunity was used.More opportunities were created.The company then saw that the disputes are always there so that they can resolve!!!....The British Empire in India had emerged......

courtesy :google
EIC was an anomaly without a parallel in the history of the world  whether one likes it or not.Started as a small trading firm with little subsciptions of few private individuals . Gradually rose to a commercial body with large resources at its command  and then exercising military  power,assuming administrative functions,own currency  in the lands it traded....finally in the form of a sovereign power!The company wound up in 1858 in the following year of Indian mutiny and thereafter the rule shifted to British empire till 1947.

Well planned , well executed (?)
Incidentally how 'smart ' the British were(with all due love and affections to hundreds of my British friends- personal and official ), when it came to taking out Indian natural resources to London in pre independence days,I had to narrate my personal experience of 1974.I was then an Assistant Engineer in the Public Works Dept  posted at Nilambur, a remote place in Kerala . Nilambur is famous for its teak  forests. As a part of investigation of new schemes and projects I had to travel in a jeep a lot including forest area , which I used to enjoy since I was hardly 24 then.

Once while  I was driving in the Nedumkayam reserved forest area about 25 kms away from the HQ, I came up to a road bridge . A very modern steel bridge , which even these days India may miss in many towns.The steel girders were all imported from England .Why such a modern bridge was constructed by the British , probably 100 years back,deep in the forest ( while they neglected many town areas), I was curious.A very picturesque scenery around.There was a plaque indicating a spot where the engineer who constructed the bridge was buried. He died accidentally while taking a dive to the river near the bridge, but his wife decided to bury him there than taking his body to a cemetery . 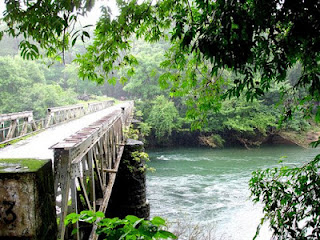 Only after so many years I had the answer to my own query.The British had constructed good roads and bridges in the forest so that they could take out the teak logs to England.For this purpose during those years , a railway track was also constructed linking Nilambur to Shornur, a major railway junction to this day . And the railway was broad gauge! A big teak tree  fell in the deep forest could be easily transported by road to Nilambur railway station and then by train to Shornur , from there to Chennai..Ships take them to London from Chennai!

Last laugh?
Coming back to East India Company,what is the current status now?At least those who does not know it would be interesting .It is live and  owned by Indians now. In 2011 a large Indian business group acquired the controlling shares of the East India Company and which is now in active business ! Can Indians have the last laugh now ? Too early to say ,but at least they can smile now ....

Sadly from what is going on in the country about Air India , it seems we Indians have not learned from our own past history!!!

POST SCRIPT
02April  2013
World is very small, it seems. It could be a strange coincidence that me and Mr. AJ Overwater, CEO, THE EAST INDIA COMPANY FINE FOODS LTD, LONDON had a formal meeting in my office three weeks back. We were discussing on possibilities of a JV in opening a branded restaurant  in Doha !!
Posted by Jaison Chacko at 13:28