DID COLUMBUS DISCOVER AMERICA? THEN HOW THE COUNTRY GOT THE NAME AMERICA?

When Americans get a holiday on every 10th October since 1937 to celebrate as 'Columbus Day', why should I doubt? Americans and Europeans can never go wrong in anything especially narration of their own history, don't you think so? Nevertheless that Christopher Columbus never set his foot or discovered North America in any of his voyages is a historical fact. Then who else? Amerigo Vespucci, whose name gave the country and two continents their names -America? He did not land in north America any time either! Was it Leif Ericson, the Islandic Viking explorer who is believed to have reached Newfoundland, Canada some 500 years before Columbus? No, as he too failed to reach America main land.

Interestingly as we all know that Columbus was keen to find a new sea route to reach India for trading its riches along with Indies and China. Finally when Columbus reached the islands like Bahamas and Hispaniola (Haiti and Dominican Republic as known today), he sincerely believed that he had reached India and the people over there were called Indians! This fact is too well known to be repeated here.

When Amerigo Vespucci reached South America and Amazon river, he named that spot of Amazon as 'Gulf of Ganges' since he too believed that he had reached India and Ganges! I am sure that this is not well known in history....

This is not history reinvented but revisited. It was there all along but many of us must not have noticed or wrongly observed for obvious reasons! 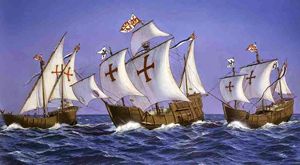 Columbus makes 4 trips ... but none touched main land of USA!
During the 15th and 16th century Europeans, esp. Spanish, Portuguese, Dutch and others wanted to find sea routes to India, China and Far East. Their main intention was to bring back cargoes of spices and silks to make them quick rich.
Christopher Columbus was from Genova, Italy by birth but moved later to Lisbon, Portugal. Columbus knew that the earth was round unlike the Catholic theologians of those days who insisted that Earth was flat! He calculated that sailing west instead of East and Africa would eventually lead to India. Finally the King and Queen of Portugal, Ferdinand and Isabell agreed to finance the trip of of Columbus.
Columbus travelled in1492 in the ship named 'Santa Maria' and along with another two more- the Nina and the Pinta- similar ships and a crew of 90 from Palos, Spain for sure. 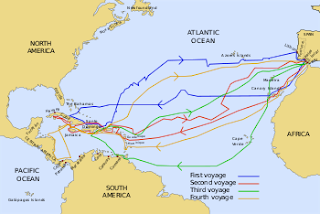 Between 1492 and 1504 , Columbus made 4 trips of expeditions of discovery to India and Indies, which was later known as the Age of Discovery. Although he didn't touch the main land of America as seen in the map above, these voyages led to the widespread knowledge of the New World! The Bahamas as well as the Caribbean islands are known to this day as west Indies. It  is also to be noted here that Columbus was merciless, brutally enslaving the natives(thinking that they were Indians) in these expeditions! He died in 1502 on the belief  that he had discovered a new sea route to India!
Amerigo Vespucci had made 2 trips but again did not touch America!
Vespucci played a major role in at least two voyages in search of India between 1499 and 1502  reaching the present South America. He was from Italy and by profession a cartographer. In 1499 when he sailed to the Amazon river, he had named that as 'Gulf of Ganges' thinking that he had reached India! In history it is recorded that Vespucci had met Columbus at least once in 1496 and shared the experiences but both never landed in United States Of America!
In 1507 Martin Waldseemuller, a German clergy man and another famous cartographer first used the name of America in honour of Amerigo Vespucci and it got stuck to the two new continents and the country. He was the first to make a new map of the world separating America from Asia. In US every March 9 is observed as Amerigo Vespucci day officially but  much less in fanfare and celebration to Columbus day, I believe. 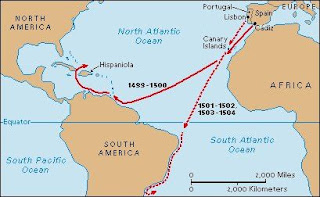 Voyage of Leif Erikson...
About 500 years early to expeditions of Columbus and Vespucci, an Islandic Viking explorer had surely made a voyage from his home country in search of the New world. It is recorded in history that he had established a settlement at Vinland in Newfoundland, Canada.
It was US President Coolidge who recognized the feat of Leif Erikson in 1925 and declared October 9 as Leif Erickson day. 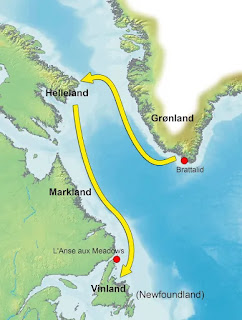