OH MARIA ! IT'S GRAND TO BE A GRANDFATHER ..... Musings of a new grandfather.

Maria  is my newborn grand daughter who came to my world just few weeks back. Son, father and now grandfather...my role is changing in the social life. There is nothing more grand in us becoming grand parents than others. Millions have gone through this process and millions will follow suit. Still when it happens to each it can trigger a cluster of thoughts... Here is what came to my mind during the first 24 hours soon after I was informed of her birth in Kochi, India while myself being in Doha, Qatar. 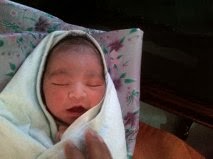 First photo of Maria.....minutes after her birth

"Jaison, God has filled up the 'absence of a daughter' if you ever had such a feeling. Anu has delivered a baby girl . Vinay had telephoned just now. He is very much excited" . Geetha,my wife was excited herself  and breathless, speaking to me over telephone. She continued " Vinay is in the hospital but yet to see the child. The doctor who attended her told him the news as he came out of the labor room. It could take few more minutes before the baby is 'handed over' ".

7.10 AM. I was in my office on my routine early morning mails and faxes .  Although few days earlier than expected, we were expecting the news. Few minutes later, I got a photo of Maria sent by Vinay in my cell. Vishal, our youngest son sent me an SMS from Bangalore." Congrats Grandpa". "Thank you kochappa (uncle)" I replied back. It was start of a flood of communications through telephone, emails and social media from far and near,from dear and not that dear, from formal and informal contacts!

Excitement .... past and present

Of course Vinay will be excited. I myself was when I came to know that Geetha had delivered a baby boy . That was in 1981. I was having lunch at Sasthamcotta TB, Kerala while working for Public Works Department when the telephone call came there. Suddenly I lost the appetite to eat any more. My engineer colleagues who were dining with me had 'permitted' me to leave the place but with a request to celebrate the happy event in my absence  but at my expenses ! മാഷെ , ചെലെവ് ചെയ്യണം Let's celebrate!

I decided not to use my Yezdi motor cycle, I was excited but instead rushed to bus stand to catch the first Fast Passenger to Trivandrum .  By the time I had reached Medical college hospital my parents had already reached the place from Kochi to join those of Geetha's. When I look back probably those 3 hours which took me to reach the hospital to see my first born could be the most excited time of my life. So far.

When Vishal, our youngest son, was born in a private hospital again at Trivandrum in 1983 , it was around 10.00 PM when I could reach there from Kochi. The security man at the door followed by the receptionist denied my entry to the room which was in the 9th floor citing rules of the hospital being late in spite I explained them it is to see my new born and coming all the way from Kochi. They said I had to come again next day morning! I still remember my agitated moments telling them rules are to be obeyed only if it is fair and walked all the way up 9 floors using stairs- two steps at a time- since the lift operator refused to take me up. But they did not stop me for some reason , may be they knew that I was too excited!

Is the excitement of moments of becoming father and grandfather the same or different ? Different levels for me but both very proud and precious moments.
I was thinking of my own birth in 1950 and more on the subject while I was making my daily customary exercise walk for half an hour in the evening  ...I was born in my mother's house തറവാട്‌ . Those days normal deliveries are made in the house and only Cesarean and complicated cases  in hospital.  Obviously I don't remember anything about myself but I do faintly about the room when my mother was expecting my sister five years later which was used by others as well. In a room exclusively meant for deliveries in the ancestral house, I remember that there was a zero watt light burning in the room through out the night and a wooden cradle purposely built and children and men are not encouraged in the room while someone is expecting ......

Grand parents - East and West
Outlook  of grandparents towards their grandchildren and vice verse world over could be more or less the same but the level of relationships they maintain could differ drastically. In the Asian and most of the Mediterranean countries the definition of family includes grand parents unlike in western Europe and US. In India thankfully it includes great grandparents as well although in the Indian metros and cities a trend is catching up to ape the west where the family is more focused with father , mother and children which is termed as nuclear family. In the west the helpless old elderly are forced to spend their last days of life in old age homes but not in India except in stray cases.

I understand the social situation in the west was more or less like what is in India now till few decades  or one or two generations back . But then they became a 'developed' society fully legalizing and accepting homo sexuality, unmarried mothers, 'live in together', old age homes......Of course as long as one there is happy about that why not ! But before we adapt them in India - changing the very Indian culture which is centuries old and stands successfully - it is better to think twice!! 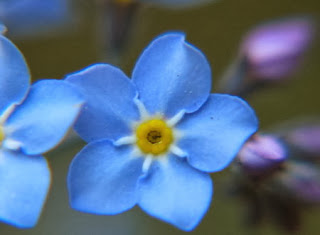 Fathers day and Mothers day invented in the west to suit their social life is getting popular elsewhere in the East with special cards, gifts,flowers etc thanks to the gimmicks of those who are in the related 'on line' business. In India too the situation is changing, unfortunately. Until recently I never knew the west also has a grandparents day ! The day is celebrated with fervor with an official song and an apt flower by name, forget-me-not ! It is celebrated since 1976 in US and some of the European countries with an official aim 'primarily to the cause of lonely elderly in nursing homes ' !!

Mia
Yes , that's the pet name  chosen by their parents. Mia is lucky to have a huge 'crowd' of relatives waiting for her ,both on the paternal and maternal sides now- three great grandparents, four grandparents, parents, uncles -she will miss her valiappappa, my chatten(brother) who left us in 2011- aunts, cousins....Don't worry Mia... hundreds of friends you can choose. " God gives us our  relatives, thank God we can choose our friends!"( courtesy  Ethel Watts Mumford )

Mia would be becoming an adult by 2034. Hopefully it should be a different India and the world by then, I presume. An India which will be occupy a deserving  place in the world leadership( unlike an Indian senior lady diplomat in US is handcuffed, paraded in public, searched nude and thrown to jail along with criminals  recently or unlike China which makes choicest unfriendly accusations on India just before a 'friendly' meeting is scheduled to take place between the leaders or diplomats to put 'pressure' on India)...An India where each citizen gets his or her rights as laid in the constitution..... An India where the expected growth in GDP is reflected in the standards of living of all citizen. Am I dreaming? No, I would say. The chances of India of my dreams is more likely to happen than not. Hopefully Mia can evaluate the projections made here independently in 2034!!

At this time when I have decided to put a comma in my busy career life of 42 years, I am ready for her ...to partner my share of inputs for her in all possible ways for a period I am destined for....Soon Puthoor  at Deshabhimani will be a home from a house as of now. Welcome Maria Chacko!