IT WAS DIFFICULT FOR THEM NOT TO LAUGH!!

Social or political protest marches have taken place in the modern world umpteen times.There are few marches which the world has not forgotten or likely not to forget which had great impact on the society and people or acted as catalysts of eventual changes in history to follow.

Protestant reformation march led by Martin Luther in 1517 in Germany,march of the people and storming of Bastille fort in 1789 which acted as a boost for French Revolution,long march of China of 1934/5 which made ascent of Mao Zedong and communism and march on Washington lead by Martin Luther King in 1963 which culminated in formation of Civil Rights Legislation in US are some which come to my mind now.First and last were peaceful but others were just opposite. 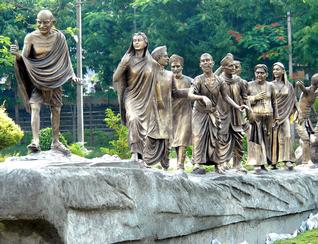 History records one more such march but unique in concept and execution.Never before or never later it has a parallel!An uncommon protest march had taken place in India over common salt which had wide impacts in the country's freedom struggle and reverberated in rest of the world in years to follow ! Totally peaceful march with just 78 people did not surprise the British authorities but its aftermath did-Salt march of Gandhi in 1935.

Like millions of other Indian children I too have read about it in social studies texts as a part of curriculum without understanding its real implications.Read many times in later life as well. But I started admiring the conceived  idea, the way it was organised and Gandhi, the person who masterminded it only after I reached my fifties when I got exposed to the corporate world esp after interacting with hundreds of British business executives, engineers and diplomats.Their system is much organised to this day.This is apart from the fact that as professional individuals Indians can compete with them- or for that matter anyone- now!

Why such a march over salt ?
By mid 1920s struggle for India's freedom was gaining momentum. Gandhi knew that it was time to shift such a movement to top gear,that too with people's participation.In December 1929 Indian National Congress raised the tricolor flag of India followed by declaration of Self Rule(Purna Swaraj).Congress working Committee entrusted Gandhi to organize the first massive action of civil disobedience through out the country along with his satygrahis- army of truth.

To the utter surprise of many even among congress working committee, Gandhi chose to revolt over salt-against salt tax which prevailed then in colonial India since 1882.When it was announced many in public thought it was too silly to link to freedom movement of India!The leading national English daily wrote "It is difficult for us not to laugh"!The British authorities were equally not disturbed .It is recorded that Lord Irwin,Viceroy of India wrote to London "At present the prospect of a salt campaign does not keep me awake at night"!

In hindsight I think Gandhi was much cleverer than others when he selected salt.Salt was important in life for any Indian whether he or she is Muslim or Hindu or others.Salt was used by backward or forward classes.It was the same in case of rich, middle class or poor.Salt is still being used in north, east,west or south.After air to breathe and water to drink, only salt was truly Indian at those times of many kingdoms and British states!! Gandhi proclaimed that taxing salt by Britsh is denying fundamental human right!

Dandi is a small seaside village in state of Gujarat.Gandhi planned to go there,break the law by manufacturing salt from sea water as a symbol of national defiance to the law.The British authorities decided to ignore such a 'silly' event  organised.But Gandhi had planned much more to do........

Off to Dandi.....
Gandhi was 61 when he decided to walk 240 miles from his ashram at Ahmadabad to Dandi with his followers,mostly unknown Indians aged around 20 years from lower strata of the society from various parts of the country. Sardar Patel made the planning in detail and visited the villages en route and made preparations silently prior to Gandhi's march which was commenced on 12 March 1930 when about 100000 people gathered at the starting point.British press gave hardly any importance but Americans did.

Through out the route which was covered in 24 days,Gandhi addressed a number of public meetings.He urged the people to boycott  British made clothes and use home spun cotton cloth instead.British used to take cotton from India at cheap rates to Manchester and make textiles.The same was resold to Indians at exorbitant rates!From hardly few hundreds of people who wanted to listen to Gandhi, by the time he reached Dandi, it was tens of thousands of Indians-all ordinary citizen- who joined the 'pied piper'.On 5 April he broke the draconian law by making salt from sea. Whole India reverberated by his act and followed Gandhi to break law, in coastal towns and villages!!

Soon it broke out in the whole country involved by millions in civil disobedience by satyagraha or effectively a strike for many days led by leaders like Sarojini Naidu, Nehru, Maulana Azad..... but peacefully which paralyzed the country and British administration. 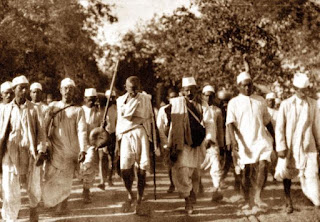 Aftermath of salt march....Gandhi had the last laugh!
It caught attention of the world and invited sympathy and support towards the plight of Indians in their own country.Astounding success of the march boosted confidence among Indians which kick started massive non violent disobedience movement in years to follow led by Gandhi until India gained independence.It was a sort of 'dress rehearsal' of a series of satyagrahas to follow!

Gandhi was released from the prison in Jan 1931.He was invited to meet Lord Irwin who finally 'lost his sleep'.Subsequently Gandhi called off satyagraha in exchange for an equal negotiating role at a London conference on India's future.

Political shrewdness........apostolic touch!
I always thought Gandhi was politically very shrewd as one can see how he had masterminded and delivered the salt march. But at the same time he had been apostolic  in nature who loved peace and tranquility in the world. Due to his call for boycott of British made textiles in India for years, export from UK dwindled and many textile mills were forced to close. Naturally life of workers in those mills were affected and poverty was in their door steps.

Gandhi took time and unusual courage to go to Lancashire and meet the owners and workers of those mills in 1931, while he was in London for the round table conference. He was sympathetic for their woes but educated them on India's nationalistic movement.I do not know how much he could convince them but what I can see from records is that he could at least command love and respects from them!!

Tail piece..
Mauritius has chosen 12 March as its independence day to commemorate the salt march of Gandhi!