HIGHWAY TO INDIA WAS A CANAL!

Suez canal was  in the news all over the world in March 2021 when a huge container ship named 'The Ever Given' accidently blocked the canal traffic for six days. It was a disruption of global trade as reported and the Egyptian port authorities impounded the ship. Finally the ship was allowed to moved out in July after reaching a settlement by the Japanese ship owners Shoei Kisen Kaisha with Egyptian port authorities.

Only few of us may be knowing that the Suez Canal of Egypt , a maritime engineered wonder of the modern world was nick named as 'Gateway To India' in 1869, at the time of building the great canal. How come a canal is named as 'Highway to India'? The name was so given that countries of the world, mostly Europeans and Arabs always wanted to trade for spices of India and Indies from the day navigation was possible over the high seas. Finding a new sea route to India circumnavigating Cape of Good Hope was a mile stone in the history of the maritime world but opening of Suez canal minus of  such a long journey of days was another!

The name Suez Canal was first registered in my mind very early in life in 1961 when I was just eleven years old. Not because I was a keen student of Geography or History but that name came many times then and thereafter in Indian newspapers related to Goa, a state now in India. It was in 1961 that India liberated Goa which was colonized by Portugal for 451 years! I remember that President Nasser of Egypt at the request of Prime Minister Nehru of India stopped the Portuguese naval vessels moving towards India at the Suez Canal to the utter surprise of NATO and USA who were all supporting Portugal hands down. This strategic move could make India attach own territory from the colonizers without much of a military warfare. 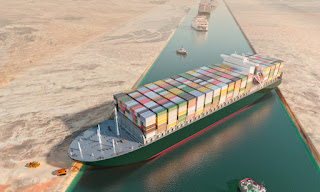 Trade with India over ages...
India was very much sought after for  trade by other countries from the time man could possibly make such journeys through land and sea. There is ample evidence for trade links between Mesopotamia and the Harappan civilization of Indus valley as back as around 3000 BC in ancient Greek and Jewish scriptures.
The Jewish Tanakha and the Christian  Bible Old testament clearly indicates about India in THE Book Of Esther 1:1 and 8:9 about a King Ahasuerus whose domain was from Ethiopia to India. Hodu is the biblical Hebrew word used for India.1 Kings 10:22 of Bible again mentions about Soloman's ships bringing gold, silver, ivory, apes and peacocks. All these are  believed to be from  India or Indies where only they were available. It may be interesting to note that 'kapi' is the word in Sanskrit used for ape while 'koph' is used for an ape in Hebrew. And the word 'tokai' is used for peacock in Tamil while 'tukki' in Hebrew. The Talmud, religious text of Jews- Babylonian and Jerusalem versions- written before by 350C specifically mentions about cinnamon, ginger, pepper and quality of Indian textiles! As I could learn this religious text also mentions about Etrog fruit(citron) imported from south India!
'Periplus of the Erythaean Sea' is the only oldest document available showing the trade routes to India from Greece and Rome around middle of the first century. The historical chronicle is well written by an unknown Greek and documented including available ports in India of those days is kept in Heidelberg University, Germany and a copy in British museum to this day. I feel happy and amazed to note that my home town Kochi is very close- just 35 kilometers away- to Muzirus a port of fame in South India those days. Greek and Roman sailors used to take advantage of the seasonal monsoon wind discovered and  named as Hippalus after the Greek navigator who discovered it in 1st century BC which would bring them straight from the mouth of the Red sea to Muziris! And could go back on the seasonal change after few months!!And it is a recorded fact that Jews from  abroad have been dwelling in and around  Muziris before the time of Jesus Christ! Saint Thomas, a disciple of Jesus Christ is believed to  have come in search of those Jews! And over 2000 years the Jewish community thrived in India, perhaps one of the few countries known to have not faced any sort of discrimination by Jews, if not the only country! 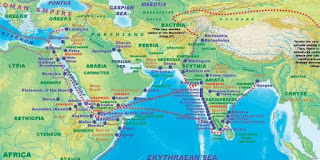 Before 7th century  it was Persians who controlled trade with India and Indies. But with the rise of Islam, Persians(Iran) were replaced with Arabs. It was in order to outsmart  the Arabs that Vasco Da Gama did find a sea route to India for trade around Cape of Good Hope, Africa in 1497. Indians welcomed them with warm hospitality without even an iota of doubt that the same Europeans would colonize and bleed their country  stealing the resources to their exclusive benefit for the next 4 centuries!! And it is to be specifically noted that when India wanted to come out of yolks of colonization and slavery after 421 years, the colonizers who are over 8000 kilometers from India, were supported by many so called countries in the west known to be 'champions of freedom and democracy' !In future too such situations will continue to come, more or less , and unless Indians put their foot down as required... as no one else will come to their rescue!
Suez Canal...linking of two seas..
Though built in the modern era, the dream of connecting the Mediterranean and Red seas was there from the time of Pharaohs of Egypt! In 19th century BC Pharaoh Senusret III and his followers had made successful attempts to connect river Nile by canals to the Red Sea, the remains of which existed till sixth century. But there was a misconception that both seas are at different altitudes till as late as 1830s while any linking of both  may end up in flooding of Egypt! In those years the French engineer and explorer Linant de Bellfords  found that both seas exist at the same altitudes.
In 1850s the Ottoman Empire which governed Egypt at that time had granted French diplomat Ferdinand de Lesseps permission to create a company to construct a canal which eventually came to be known as Suez Canal Company which was given on a 99 year lease over the waterway and surroundings.
Suez Canal emerges finally...connecting the continents and civilizations!
The Suez Canal company hired the expertise of a professional civil engineer Alois Negrelli and others and the survey, estimates and works started in 1859 in right earnest. An estimated 1.5 million workers participated in the project  stretching 193 kilometers  which took 10 years. Many perished in between due to Cholera and other reasons. Many of them were just employed as slaves!!On August 19, 1869 the waters of the two seas met for the first time while  on November 17,1869 the canal was formally opened by Ismail Pasha, Khedive (Ottoman Viceroy) of Egypt and Sudan in presence of a lot of dignitaries from world wide. 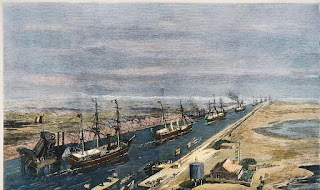 A bit of a twist in the opening ceremony....
The concessions given to the French by the Ottomans was never liked by the British, the way some unexpected happenings took place on the inauguration day of the canal which was carried out with much pomp and publicity! In fact the interests of the French and the British in digging a new canal was the easy transport of resources stolen from their respective colonies in Asia and Africa than anything else and also to dump their inferior goods at exorbitant rates in those markets like India! Late 18th century, the time of opening the canal  was the peak of bleeding of Indian resources by the British to remain as the wealthiest and most influential country in the world!
It was so decided by the authorities that the first ship officially to pass through the canal was the imperial yacht of French Empress Eugene, followed by the British Ocean liner named Delta. But to the utter surprise of all, a British ship was the first to enter the water way. The ship under the cover of darkness of the previous night sailed through the canal just few hours before the ceremonial opening!!It is also recorded that the captain of the British  ship HMS Newport was reprimanded for this action but the British Govt lauded him in secret!! However the authorities could hold the inauguration ceremony as planned and 70 ships followed the pilot ships out of which 50 were war ships.
The major shareholder of the Suez canal company remains France, while Ismail Pasha and few others were forced to sell their shares to Britain in 1875, since the company found it difficult to run it financially.
Nationalization of the Suez canal and the Suez crisis....
President Gamal Abdel Nasser on 6ht July 1956 on a very surprise move declared nationalization of the canal by Egypt to the disapproval of almost all the western powers. They tried to arm twist Egypt, withdrawing their pilots and specialized technicians deployed at the canal, thinking that Egypt will not be able to run it without them!!But Egypt managed to run it with the help of few friendly countries. Finally the issue was resolved by a joint decision of keeping a peace force of UN at the canal!
Tail Piece!
Prime Minister Nehru of India was in full support of Nasser and Egypt during the Suez crisis. Perhaps that could be a good reason why Nasser decided to say no to the Portuguese ships to enter the canal ,on the way to India in the Goan liberation action!!
Posted by Chacko at 09:14 11 comments: