AT CROSS ROAD.....in pursuit of history of cross..

April.Month of Good Friday for Christians  which is synonymous with a wooden cross on which Jesus Christ is believed to have died.Many may not be aware that the  cross which is the most common symbol of Christianity internationally  now, took few centuries to be recognized so after the death of Jesus Christ.So also the new faith born in Palestine- Christianity was not welcome only there but in any land under Roman rule for few centuries.In fact early Christians were persecuted until end of 3rd century in places like Rome......

During the time of Jesus Christ a cross was just an instrument for the capital punishment while crucifixion was one of the most painful,disgraceful,dreaded and brutal mode of death in history, if not the most. The victim eventually died after several  hours or days from exhaustion and asphyxiation hanging from a large wooden beam.

But how and when did the cross start representing Christianity?During the month of most famous public execution of all time, few non theological rather historical musings on the cross,arguably the most recognizable symbol in the world .... 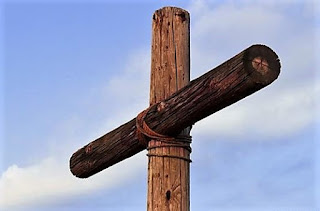 Crucifixion..when did it start and end?
Crucifixion had become an established form of execution in the Roman empire long before birth of Jesus.It is first attested in ancient history in Persia.That was by 6th century BC.Probably Assyrians and Babylonians(more or less present day Turkey and Iraq) might have used it before.This was later used by Greeks, mainly by Alexander the great and Carthaginians who introduced the method to Rome.

It was Romans who perfected the technique of crucifixion.When I use the term 'technique' I do that intentionally. Because Romans made sure that maximum agony for maximum prolonged period is inflicted on the victim. For this reason it was widely used only for slaves and non citizens from 3rd century BC.It was not used among the citizens.History clearly notes that when Spartacus led his rebellion against Rome,once he and his 6000 followers  captured, were crucified mercilessly. Crucifixion was a common sight in the Colosseum those days. Romans might have chosen this mode of capital punishment to put fear in everyone who wanted to stand against Rome and Roman laws.Palestine was under Roman rule during the time of Jesus Christ.

After execution of Jesus Christ who had few followers,they were not allowed to preach or practice what they believed in any land under Roman rule.Early Christians were persecuted there for the first few centuries of its birth!In other places also people of new faith were not welcome.

In Rome, Emperor Nero had the distinction of executing quite a number of early Christians!However after continuously adapting Crucifixion as a method of capital punishment for 500 years,Roman Emperor Constantine in AD 341 abolished it abruptly in honor of Christ's death and legalized the new religion on a surprise move once he came to power! Christians started  using cross as a symbol of what they believed in public only after Emperor Theodosius declared Christianity as state religion in AD 380 ! Until then it was represented by other symbols such as Alpha and Omega,Ichthys (shape of a fish)....

Different forms of cross that existed in history...
Historically there are two methods by which the victim was attached to a cross-by rope and by nails.Roman historical sources indicate that those who were condemned to crucifixion generally forced to carry only the cross beam and not the complete cross.The vertical upright was set on a permanent place where it was used for subsequent executions.

There are different forms of cross that existed in history. The word for cross in Greek and Latin is Stauros and crux respectively.Crux Simplex (I) was single upright post only.Crux Ansata/Anka based on a tau cross surmounted with a loop and Saint Thomas cross are believed to be earliest forms of crosses used in Egypt and India respectively. Crux Decussata is shaped after Roman numeral X.Crux Immissa  is the type of cross in which the vertical beam sticks out above cross beam.This type of cross is believed to have used for Jesus Christ and eventually became the most widely recognized symbol of Christianity.Over the centuries quite a number of different types of crosses came into existence among the believers. 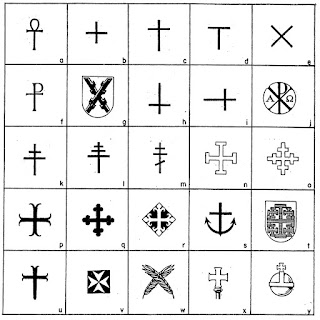 Symbol of Cross...something common among all Christians...
There are tens of major divisions and hundreds of different sectors among the christian believers today.Albeit all are Jesus centrist churches, denominations or congregations, they practice different forms and ways over the centuries, each one believing that theirs is the best! And as a christian I can see that unfortunately some of them may not be necessarily practicing all the time what Jesus lived for-Love, peace and tranquility!But almost all of them acknowledge something in common- cross as the symbol of Christianity!!But in this matter too there are very few groups within Christianity who differs!!

One can find in churches and elsewhere, a cross with Jesus crucified or a simple cross alone.While the first one is a reminder of Jesus Christ's sacrifice, the later reminds the believers of Christ's resurrection adapted by Catholics and protestants respectively.Many cathedrals and churches are built to have floor plans based in the shape of a cross-cruciform- to this day.And during the course of the worship Christians make the sign of cross by touching the forehead,chest and each shoulder few times. 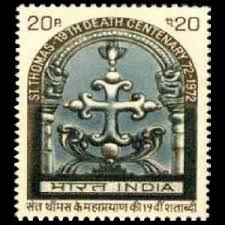 St.Thomas cross
One country where Christianity was welcome right from ancient times and flourished without any hardships is my own great country India.Saint Thomas, one of the disciples of Jesus Christ is believed by tradition to have landed in Kerala, South India in 56 AD!It is also believed that he came in search of Jews already in India by that time.Though Christians remained less than 2 % of total population, in 1972 the Govt of India came out with a postal stamp to commemorate the 18th death centenary of Saint Thomas, depicting the Saint Thomas cross which is being used here for the last 2000 years without much changes!!
The greatest gift.....and The hope..
Mr.Bipin Cyriac is a senior IT professional and business man in the field at Kochi. Not only Bipin happens to be son of a family friend of ours but he and his wife Rita are good  friends of ours as well,though much younger to us.A gifted artist himself, Bipin has sent me recently two creations of his which are related to cross.Since these two creations are not normal,the very thoughtful views are outstanding, the same are reproduced below:
The greatest Gift (John 3:16) is the title given.An unusual perspective of Jesus on cross as looked from above- a 'plan', if I am allowed to use an engineering term. 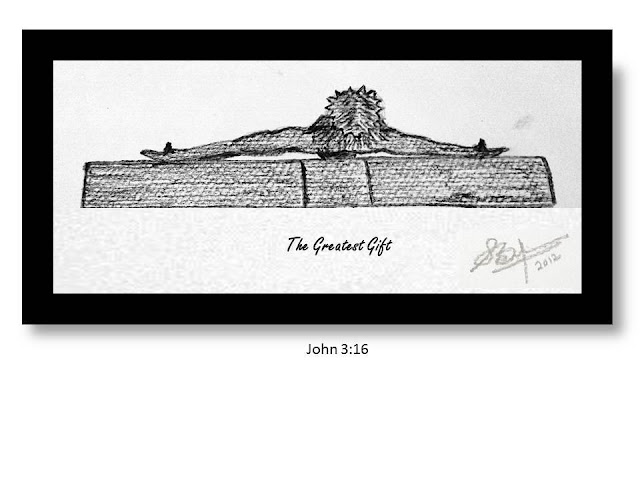 The Hope ...is another unusual perspective using 'geometrical theology' as he has put it..using figures like rectangles,triangles, trapeziums...with the support of his school going children- Maria and Cyril.This is imagined as the view of Jesus and cross by the Penitent Thief, also known as the Good Thief, the person who was executed on another cross on the right side of Jesus! .. 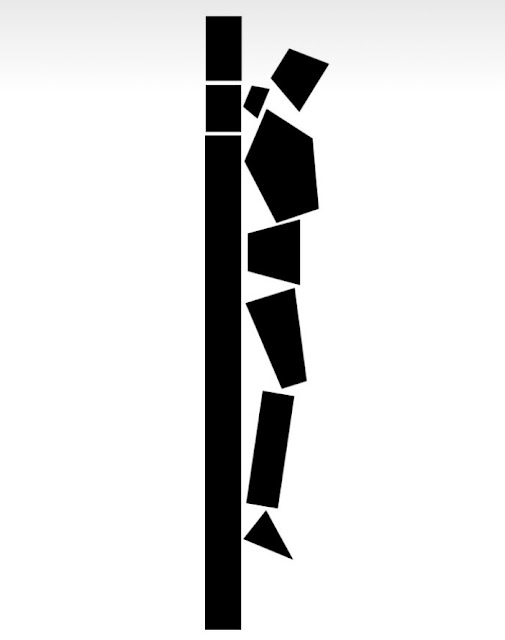