Kerala is a unique state in the country ( India ) by many standards . Most of them are good but few are pretty bad . Most literate state , the state having the best Human Development Index ( a measure for the quality of living), state having the best economic productivity, the state having least communal frictions .... the list can be stretched with further sobriquets. Paradoxically it is also the state where maximum suicides take place, and now Kerala is in the top of the list of drunkards as well -  with the highest per capita consumption of  alcohol in the country !!!

Serpentine queues in a ' no queue state '

I and Geetha had to drive on the last Thiru Onam day from Trivandrum to Kochi . Onam is the harvest festival of the state and regardless of religion all keralites celebrate it with fervor . Climax of the celebration of Onam is to have the vegetarian  lunch on the plantain leaf , rice with a lot of traditional curries , desserts etc eating along with all others in the family. 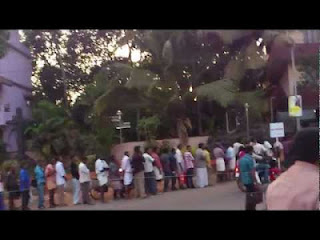 While travelling , seeing lengthy queues in each small town which we passed , we were curious . In Kerala , in spite being the most literate state none will practice any queues in public places. Whether it is to board a bus or train, whether it is in hospital, bank or on roads it is the same attitude. Not only now , but from the time immemorial . But while living in another state or country we will be the first to queue up!! (Sorry, we are like that ). Now coming back to queues which we saw , we could notice that 'all the queues lead to liquor shops'. Town after town it was the same scene . Even on Thiru (main ) Onam day at noon around 1 pm , men are patiently standing  in orderly lenghty queues!!! Poor family members , I dont know whether  they have to wait for him to have the lunch at 3 pm  on a Onam day !!! 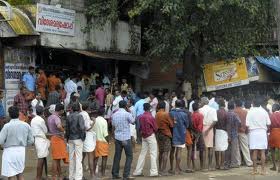 Interestingly such queues can be seen all the days through out  the state. Come the evenings , men from mostly blue collar , white collor or no collar  working class (or retired) will be there to spend a portion of their wages (Again highest in India  , almost on par with what they can earn in gulf states  - an unskilled worker is paid Rs 500/600 plus while skilled is paid Rs 700/ 800 plus !! per day) 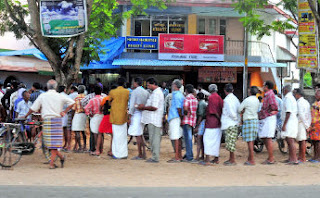 Such queues are not restricted to festivals or holidays , every day  esp during evenings . Regardless of religion/ community , all people , through out the state 'participate' in this operation !Unfortunately Kerala has reached the level of  problems more than due to 'social drinking' , a state of ' rain or shine we shall have wine' !

Liquor business is monopolised by the Govt run corporation - Kerala State Beverages corporation .Through 340 sales outlets , it operates from 9AM to 9PM , 7 days a week , 365 days a year (except on 1st of each month - Govt thinks of the welfare of salaried people! ) ! Other than this ,there are 600 privately run bars and 5000 odd toddy shops ( local palm wine)!! Coming to Toddy shops, toddy is made of coconut palms . It is a fact known that toddy shops are selling many times higher than what actually could make out of all the coconut trees in the state meant for the purpose, for which the fingers point out to adulteration with synthetic toddy!!

Alcohol helps Kerala Govt to run its economy . Booze boosts  the otherwise 'remittance economy ' Kerala is famous for , it seems . 40% of the revenue of its annual budget comes from selling booze.

Kerala has topped the list with eight litres per person per year while the national average is less than two litres. Poor Punjabi is now a far second .The  'intelligent' malayali now spends almost 3 times for liquor than for their staple food rice in the state ( Rs 7500 crores for the booze, Rs 2800 for the rice !!).

Who will bell the cat ?

Everyone in the state knows that the situation is pretty bad . Each Govt wants to make drastic changes but falls short of it each time foreseeing the huge loss of revenue without which state cannot run now .  Social and religious institutions are loud and clear on the subject . National media has covered  the subject widely. International media such as BBC has run stories on the subject. Sensing the danger the state may fall into , High Court of Kerala has recently suggested that the sale of liquor to be allowed only after 5 PM ,while considering an appeal by the Govt !!
Sadly undeterred ,the self styled ' most literate' , ' most intelligent' , ' most cultured' malayali keeps on drinking ..... other than learning how to form a queue, everything else is bad in this case !