Statue Of Liberty at New York is positioned perfectly in the southern part of Manhattan-ideally for views from ships entering the harbor. It is a grand view as she holds a torch above her head with her right hand while she carries a tabula on the left hand, with broken chain at the feet, which many might have not noticed. It is written on the tabula worded JULY IV MDCCLXXVI -July 4 1776- in Roman numerals, the date of declaration of independence in US!

The grand looking lady of famed statue which is officially named as 'Liberty Enlightening the World'  is dressed in flowing robes. Such a dress has never been normally used anytime by a woman in US nor in France, the country which gifted the statue to US! Is there something more to why such an alien dress was chosen by the sculptor albeit it is said to be a figure of Liberta, Roman Goddess of Liberty?

Yes, Frederic Auguste Bartholdi, the French sculptor who created the statue was definitely inspired with much more, something most of us are not aware, if his career is tracked which is no secret. This time I am sharing such intriguing and fascinating facts related with one of the most recognized monuments of the modern world at a time it is 134 years exactly - 28 October 1886 since the statue is erected....at a time France, the cradle of democracy and freedom of expressions of modern world is going through not a smooth time. 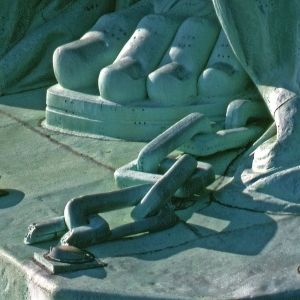 How the admiration for liberty took shape into a statue
Eduord de Laboulaye was a very prominent French political thinker of his time. He loved freedom and democracy and for the same reason supporter of Abraham Lincoln and an expert on American constitution. It was his exclusive brain child that he proposed the idea of creating a colossal monument as a present to United States for liberty, thinking that it would be equally a right guiding force for the French, his own people.
Though Eduord made the proposal in 1865, it took another ten years for his dream to take shape. In 1875 he sought the help of his sculptor friend Fredriec Auguste Bartholdi who was asked to design a suitable colossal statue for the purpose. It was so decided that the statue would be funded by the French people while costs of the pedestal would be borne by the Americans.
How the statue took the shape of what it is now......
Fredric Bartholdi , the famous French sculptor was contracted by the Egyptian Government in 1869, few years before he was assigned with the project for the statue of Liberty, to design a suitable light house monument at the mouth of the Suez Canal at the Mediterranean mouth at the time of opening the marvel of engineering of that time.
He had prepared a colossal fallaha- meaning female farmer in Arabic to this day- many times life size holding a torch with a theme 'Egypt carrying light to Asia' for his Suez Canal project as below. But the project was abandoned by the Egyptian Government due to paucity of funds. 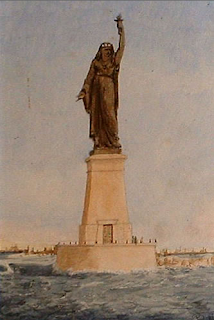 The Egyptian lady definitely bore a resemblance to his creation of the Statue of Liberty.
Bartholdi to Gustav Eiffel of Eiffel tower...
In 1870 Bartholdi commenced his work on the statue of Liberty. It was made of copper sheets hammered into shape manually and assembled over a framework of gigantic steel supports. Not only the structural stability but the swaying wind pressure expected at sea could be a threat, Bartholdi knew. For this purpose he hired the services of Eugene Violet le Duc who was a famous architect cum engineer of his time. While the design of the internal structural support system was almost completed  he died in 1879.
It was then Bartholdi went to Gustave Eiffel for the helps. He completed the design and execution of the support system of the statue of Liberty enabling it to withstand the winds of New York harbour- swaying up to 3 inches, temperature changes and other weathering actions. It was the same Gustav who became a house hold name all over the world by his creation of Eiffel tower!!
The colossal statue was completed in copper colour, shining as a new penny. 7 rays of the crown represents 7 oceans and continents while at the feet the statue lay the broken chains of oppression and tyranny! 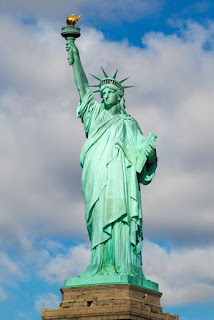 Meanwhile Richard Morris Hunt a US architect designed the pedestal on which the statue is erected. The fee he got by doing this was donated by him, to the committee to fund the statue.
And finally...
The statue was finished in 1884 and formally presented to the American ambassador in Paris. It was then dissembled to 350 pieces and to crates for transportation to US. The statue was dedicated on the pedestal on 28 October 1886.
As the copper colour of the statue turned into green after 25 years of erection, as we all see now, due to oxidation the statue became a symbol of hope for thousands of immigrants who arrived in New York thereafter, while it also symbolizes the American imperialism in many parts of the world for many....
courtesy Google for
images.
Posted by Chacko at 10:17