I have been an ardent fan of Hollywood movies from my teenage days,then through adolescence and youth. The curve started coming down thereafter,giving way to Indian - Hindi and Malayalam- last being my mother tongue movies. I still enjoy selective Hollywood movies.But what I have been enjoying without an iota of drop of interest to this moment is while watching the growl rather than roar of the lion of MGM-Metro Goldwyn Meyer- studios!It must be equally amusing to millions around the world all these years considering the fact that it is a century that MGM studios have retained  the famous logo while launching  their movies.

Along with MGM,few other logos of old Hollywood studios like Paramount,Warner Bros, 20th Century Fox,Dream Works.... with their distinctive signature designs have attracted me.But none like that of MGM! At a time when the logo has already scored a century since it was created, it is more than interesting to know how this was achieved.It is not one lion as you think but seven!!

Popularity of the lion and his roar finally engulfed that of the creator!It was created for marketing purposes but emerged as the best among the iconic  logos!  The lion and his roar have become indispensable for MGM ..or perhaps the whole Hollywood!!

Merger of 3 companies-MGM....but why a lion?
In 1924 Morens Loew's Metro Pictures  decided to merge with two other companies of Hollywood.They are Samuel Goldwyn's studio  and Louis B Mayer Pictures.The company thus formed was named MGM- Metro Goldwyn Mayer.The newly formed company MGM obviously decided to continue to use the popular mascot of Goldwyn's studio- a roaring lion designed by Howard Dietz.

Dietz was a product of Columbia University in Journalism which falls in the IVY League,US.After his graduation he had joined an ad firm where he was assigned the job of designing a mascot for Goldwyn Studios. Dietz must have been very proud of his Alma Mater that he decided to honour the athletics team of the University nick named as 'The Lions' ,the mascot of which was a lion. Interestingly even now the mascot of the athletics team of the University continues to be a lion with a caption...roar lion roar! In 1917 he could make the exclusive design with a lion roaring which was trade marked.The motto chosen for the studio by Dietz, who later also became a popular lyricist was 'Ars Gratia Artis' which in Latin means 'art for art sake'! In 1919 Dietz joined Goldwyn studio and continued with them and later MGM till 1957 as Director of Advertising.

Slats,Jackie,Telly,Coffee,Tanner,George and Leo.....
They are the real names of the seven lions which were used in creation and improvisation  of the logo of the MGM albeit most of us think that it is just one named Leo .

In 1917 initially for the execution of the project Goldwyn studio also hired the services of the best known animal trainer named Volney Phizer while the lion was a Dublin born 'Slats'.The lion did not roar for sure since it was an era of silent movies but was asked to look around!Goldwyn studio successfully used this lion till 1928 in black and white movies.In between the bond between Slats and Volney Phizer became so close that when the lion died in 1936,he was buried with honour in the estate of the later.

Jackie was the second lion used for the purpose by MGM but first to roar in the screen which was trademarked including the sound.His trainer was Melvin Kootz. Jackie's head was filmed in a frame while the roar was recorded separately.MGM successfully used this roaring mascot from 1928 in more than 100 movies.When Jackie retired in 1931, he was sent to zoo at Philadelphia. 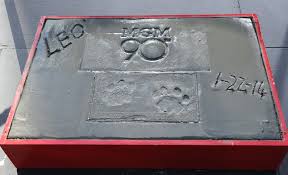 Paw imprints of Leo, the lion.
Lions Telly and Coffee could stay only a very short period of 7 years between 1927-1934 with MGM.Tanner(1934-56) was the largest among all the lions while  sixth lion named George was with MGM only for a very short period 1956-58.Finally Leo was inducted in 1957 and his roar is what the world hears since then.On walk of fame in Hollywood, along with prominent actors, actresses and directors, Leo was given the honour of impressing his paw prints in wet cement in 2014!

Innovative marketing techniques ....
MGM has successfully experimented allowing several alterations to the studio logo in many contexts. Some of the Tom and Jerry cartoons  released through MGM from 1963-67, in place of the lion, MGM introduced Tom meowing in the style of  the lion to the amusement of the viewers. When MGM did a horror movie in 1967, the lion was animated with blood dripping from the mouth! MGM allowed a crocodile in place of the lion in an animal based movie in 2002-The crocodile hunter-collision course!
. 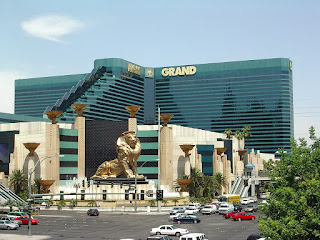 Once the logo of the lion clicked, MGM has perfectly marketed the logo in various other fields than movies. Leo the lion stands out on the front in their luxury resorts at Las Vegas where  we had a chance to stay for few days. Leo the lion also is statued outside Culver Hotel, California.
Courtesy photos:Goggle
Posted by Chacko at 09:49