CRACKING OF 'ENIGMA' CODE...AND THE WAR WAS OVER !

Second world war remains the biggest global war ever fought in this world so far which involved virtually any part of the world in 1939-45.Finally  as we all know the axis powers-Germany, Italy and Japan were defeated by the Allies-France, Great Britain, United States and the Soviet Union. Did any single event during the course of the war can we pin point as the reason  for the defeat of the Axis forces? Probably not ,but many historians believe to the extent that cracking of 'Enigma' secret code of the Germans by the British was the single most important victory of the Allied forces- a secret the British kept  as top secret not only from the Germans and Axis powers but even from The Allies, own partner countries!

The word Enigma in English means puzzle, mystery or riddle. The Germans invented an encryption machine in 1930s to send coded secret messages and suitably named it as 'Enigma'. The Germans thought it as 'undecodable' under all circumstances, the way the British once thought 'unsinkable' when the Titanic was built and launched! The Americans, Russians and the French all considered such a machine invented by the Germans was invincible!

Bletchley Park with a huge mansion in the country estate of 550 acres located at Birmingham shire, north of London is a museum now. But it was once the secret home of code breakers during WWII. Again we hardly know about Alan Turing, a very bright mathematician who played a major role in decoding of 'Enigma' at Bletchley Park...The mystery which was kept as top secret by the British for 50 years even after the war! 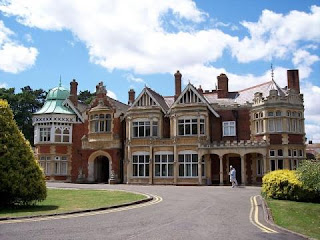 The origin...
The Enigma machine was invented by the end of the First World War by a German engineer named Arthur Scherbius but perfected by 1923.In 1933 German Army had acquired the manufacturing rights of the Enigma machine and started in use of sending thousands of coded messages in the various wings of armed forces. During the course of second world war, the German forces used to sent more and more secret commands as they were convinced of the invincibility of their machine!
How the Enigma machine worked?
This machine looks more like a typewriter to the lay man. For each letter that was tapped in, another letter would come out so that the message sent would be received in a code. The receiving party had an identical machine with the same settings. So when the coded messages was fed in, the German text would come out! And the machine had 158 million million million different settings so that it was impossible to crack the code! Or at least the Germans thought so!!To make it invincible the Germans changed the code setting each day!!
Enter Alan Turing in Bletchley Park...
The British knew that decoding the Enigma machine to access the secret directives and motives of the German command is the best solution to be the winner of the war but at the same time knew that it was an impossible task or close to it. The fact that three Polish mathematicians, Henry, Marian and Jerzy-I am cutting down their surnames as it is a bit complicated to pronounce being typically Polish- had almost solved the riddle in 1939 but the fact that Germans changed the cipher system code each day made their dream fade away gave a lead to the authorities at the Park but nothing further. 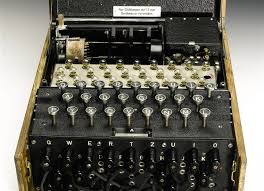 Enigma machine
It was at this time that Alan Turing, a very bright mathematician  enrolled at Bletchley Park. He was considered to be super genius with an IQ rating of 185-gets into the top 0.1 % of the population of the world. At the same time his behavior was very odd, did not cooperate with any colleagues-mostly crossword enthusiasts- and hardly spoke to anyone or eat - always at work! His movements were so suspicious that his bosses at Hut Eight of the Park thought that he is a Soviet spy!!Interestingly as Alan did not know German language, it was a puzzle for his bosses that how could he decode the message sent by Enigma machine which was sent in German language! Contention of Alan was that knowledge of German is not at all essential, instead was working for a machine of his own for decoding!
Finally to the total surprise of his bosses in , Alan Turing came out successfully with a machine of his own creation which he named as 'Bombe'. He was assisted by a fellow code breaker Gorden Welchman. They all cried with joy and disbelief when the messages in German sent by the machine as war intelligence were recorded in English at their lab! Sadly but firmly Alan resisted immediate revelation of his secret invention to authorities or call for counter rescue actions to avoid any doubt of such a finding by the Germans. Eventually without invoking any doubts for the Germans, other Axis forces and even other members of Allies, Alan and his team at Bletchley Park started saving millions of lives by timely counter actions. Stalingrad, The Ardennes, The invasion of Normandy, the Battle of Atlantic...all would not have been possible but for the intelligence they supplied from Park!
British kept it as top secret...even after the war !
Strangely, finding of such a machine, cracking the 'indomitable' enigma code was kept away from even the other partners of Allied forces by the British throughout the war. Even after the war such an information was not made even to the public for nearly 50 years after the war!!That is incredible. Once the war was over the group of decoders at the Park were asked disperse in secrecy to go back to their respective jobs with keeping their mouths shut for the rest of life. 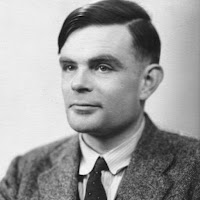 Anti climax...of a person who saved 14 million lives during the war!
Military historians estimate that due to decoding of Enigma, war could be ended two years earlier, saving not less than 14 million lives of people of different nationalities!
Not only Alan Turing was never recognized for the meritorious service he did for the British, the Allies and the mankind, surprisingly he was arrested for homosexuality- a crime then- in 1953. After  an year he was awarded with hormonal therapy-castration by the Government, Alan committed suicide at the young age of 41 in 1954!!
Posthumously in 2017,Queen Elizabeth II granted Turing a royal pardon considering his unprecedented achievement  for the mankind. In 2019 Alan Turing was chosen as the new face of British 50 pounds currency notes in recognition of his services!!
I am sure that British Government will shower more and more accolades on Alan  as years go by, though what has inflicted to him cannot be withdrawn !!It is something like how Nobel Foundation smartly sidelined the greatest peace lover of the modern world Mahatma Gandhi, though nominated at least eight times for the Nobel Peace Prize, now making futile efforts to make good what wrong had been done!!
Of late there are few films which has surfaced based on the whole episode-'The Imitation Game' is one among them. The world is yet to know of what Alan Turing did to mankind!
photos:courtesy google