America keeps on charming me whenever I make a visit there. I am amused when I see toilet rolls in a store with head of the President of the country printed on it for sale. But if one is not happy with it, he or she also has a choice to buy a toilet roll with the face of the head of opposition !! I don't know whether it is the limit of expression of personal freedom or stupidity but I am amused. Seeing supersized food portions people eat or when I get a big glass full of ice cubes and some cold water when I ask for a glass of water in a restaurant, I remain fascinated.

I am charmed to see  that Americans always think of everything big- not only food portions ...automobiles, size of roads. American pharmacy is not just drug store but mini shopping mall where I had purchased even  a bottle of Jack Daniels! They love to see the national flag fly everywhere in the country all the time- homes, cars, offices...even as bikinis on the beach! I find them mostly polite and sincere in their jobs! I remain charmed when the old American lady tourist guide mentioned that San Francisco has a substantial number of Indian medical doctors and IT techies and thanked us for 'sending them' over, I am more than pleased for her expression of undiluted politeness!

Having said all these, one place where I am charmed the most during the recent visit is when I saw the Golden Gate bridge at San Francisco. Not because it is an internationally recognized icon of US, but simply a stunning beauty combined with marvelous engineering to be a  feat of 20th century.. Charming Chrysopylae ..... 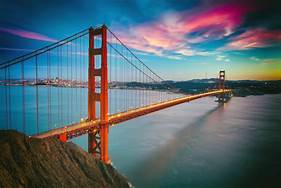 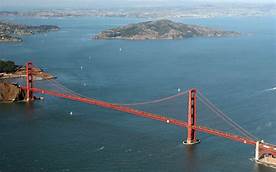 'Whats in a name'.....
The name Golden Gate has no connection with gold rush of California. It has no  connection either with the golden ambiance the bridge radiates in the night due to special lighting. Chrysopylae is a Greek word which means golden gate. It was John C Fremont, explorer who ran for the office of the President of United States who used the term-Chrysapylae in 1846.While crossing the bay he noted that it reminded him of the harbor of Istanbul, 'Chryceras', another Greek word meaning golden horn. He had obviously meant that the San Francisco bay is a golden gate to trade with orient in future! The Golden Gate bridge spans over the Golden Gate straight which is the entrance to San Francisco from the Pacific Ocean.

Recap of history of the bridge...
I think the Americans have advantageously used steel as a building material for heavy structures than anyone else in the modern world. Brooklyn bridge, NY built in 1900,Empire State building and Chrysler building in Manhattan built around in 1930 are good examples of best use of steel in the earlier years of steel as a structural material.

It was Joseph Strauss a Jewish German settler civil engineer who advocated for the feasibility of such a bridge in 1920s. A  lot of opposition he had to face not only from the reps of the people but the press and even US Navy! While the technical people doubted ability to cope up the engineering challenges the bridge brings up , many economists warned that such a bridge would be exorbitantly expensive, nature lovers pointed out that it would be environmentally disastrous, while the Navy was worried about the  safety and security around the Bay! I have a positive observations on these criticisms to note that Americans were aware of these problems even in those years. But Joseph Strauss kept on the drive while the first design was proposed by him in 1919 as below. 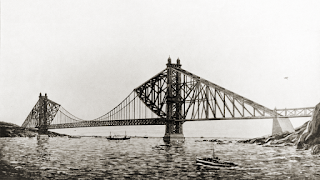 discarded proposal of the bridge

No one liked the design which was summed up as ugly. The press commented on the image as 'upside rat cage'! However Golden Gate Bridge Co was formed in 1928 while Joseph Strauss was appointed the chief Engineer of the co. Another Engineer Charles Ellis and Architect Irving Morrow along with Strauss can be credited with the design of the bridge- cable stayed suspension bridge with two towers- as we see now. Relationship between Ellis and Strauss did not go well. Ellis was fired from the job and Strauss ensured that Ellis did not get any credit for the wonderful job he did including a mention of his name on the plaque which was erected on site later on completion of the project. Eventually the authorities found out this grave omission which was finally addressed in 2007.  Construction of this ambitious project was commenced in Jan 1933.

Expected challenges ...unexpected solutions
As expected a lot of problems the company had to face during the construction. As Americans believe to this day in 'safety first' while executing projects, the primary concern was to minimize the number of site accidents. Excellent safety measures were taken including provision of safety nets below for workers who were working in heights. Hard hats were insisted for workers and  for any one who enters the site. It is a pity that what US could achieve in these matters 90 years back, India cannot even today! Anyway it has to be appreciated that only 11 workers died during the construction period of the bridge.

In order to help workers from hang over from booze, they were offered free Sauerkraut juice- made from fermented raw cabbage- in the mornings. It is recorded that productivity increased. I think this practice has to be adapted in Kerala State where I live now!

The color of the bridge is orange which is unique to any such bridge anywhere in the world. They could have painted with golden color to match its name. Actually orange was the color of the primer, first coat of anti corrosion paint in which the steel members were supplied to site for erection after fabrication at New Jersy and Maryland to Philadelphia in rail cars and shipped from there through Panama canal! It seems Strauss and the team decided to retain the 'international orange' color since it goes well with surroundings and against the seasonal fog of the San Francisco Bay, clearly visible to ships. It seems the US Navy wanted the bridge to be painted with gold and and black stripes! The bridge was finally opened to public on 27 May 1937.

Post construction woes....
The bridge had to be closed on three occasions due to heavy wind in 1951,1982 and 1983...After some years on inspection it was noticed that the vertical cables that connect the deck and main suspension cables got corroded than permissible levels. As such all the  suspended wire ropes were replaced with new ones. The whole operation was done without any publicity or notice of motorists or other bridge users to avoid panic among them. 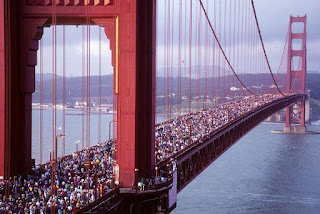 On 50th anniversary in 1987, cars were banned for few hours but the public was allowed to walk. Against an expected crowd of 50000 almost 300000 people came to celebrate the grand occasion. A deflection of seven feet at the central span of the bridge took place as it is recorded that day. Though provision for this was allowed in the design of this suspension bridge, it was alarming for those who observed that on the occasion! I am sure that authorities will avoid a similar type of celebration in 2037 when it will be  100th anniversary, the way they did on the 75th anniversary!!

On opening day in 1937, The San Francisco Chronicle referred to the bridge as 'A thirty-five million dollar harp'! Yes, the Americans could engineer a gigantic harp in steel which will remain so for centuries to come.