Eating under canvas shades of street pavement restaurants of Europe is an experience which I used to enjoy. While the temperature is around 15-20 degree C, as the sun plays hide and seek behind clouds, having a beer or coffee or lunch at leisure is a great experience. It was one of such occasions at Rome that I had my first encounter with a miniature Manneken Pis. A Chinese girl peddler wanted to sell cigarette lighter in the shape of a peeing boy. Instead of piss, fire comes out of the boy as one clicks .It was cute. When I decided to purchase it 20 years back, I did not have the faintest idea that the lighter was a miniature of Manneken Pis , which is a landmark of Brussels. Later only I came to know about the little peeing boy-Manneken Pis- which is arguably one of the best attractions of Brussels and has more close friends there...

The city boasts of two more pee episodes in the form of statues. One of a little girl Jeanneke Pis and the other which is of a dog- Het Zinneke !Here I am sharing about a city where Karl Marx and Fredric Engels chose to write Communist party Manifesto which became more famous because of its pee statues .... 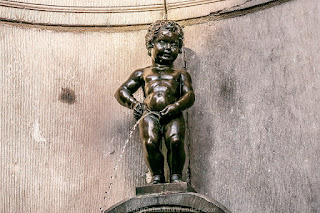 The boy continues to pee...
While in Brussels, Karl Marx and Friedrich Engels concluded the Communist Party Manifesto with the following catchy declaration "The proletarians have nothing to lose but their chains.They have a world to win.Worker of the world,unite".It was written in 1847. Slowly but steadily it became famous among the communists which spread to many countries.Contrary to expectations or predictions of many  such an declaration lost its charm later. Towards the end of last century communism itself lost its ground which is now limited to only very few countries.But interestingly the Manneken Pis, the boy continues to pee to make city of Brussels famous to date from inception in 1619!

There are quite a number of mysteries behind this statue public fountain.But no one is sure of anything in particular since it is as old 300 years!One such story is that during middle ages tanners in around that place used to let their children urinate on leather since the ammonia in urine helped to make leather more supple.Out of such a wild practice the sculptor got an idea to make a statue which pees.Another such story is that once Brussels was surrounded by enemies-kept under siege-in  the 14th century who wanted to detonate the town using the gun powder.A little boy named Julienske saw the burning fuse.He was quick enough to pee on it to make it damp.The sculptor honored the boy making such a statue in action!

The first bronze statue is made by Duquesnoy the elder in 1619.It was destroyed in 1817 but the pieces were found and glued together. Since then the statue has been stolen and retrieved several times through out the history. But after last of such an incident the original was kept in  the city museum while an exact replica is placed on the spot! Following the complaint that the fountain wastes more than 1000 liters of potable water down the drain, Manneken Pis has a special channel installed to reuse the water it discharges now. The statue which is only 24 inches tall may be inversely proportional to its popularity .As a part of tradition, city of Brussels dresses up the little bronze statue at special occasions while the wardrobe consists of more than 800 costumes, mostly donated by other countries/institutions. I am sure the little boy will continue to inspire. 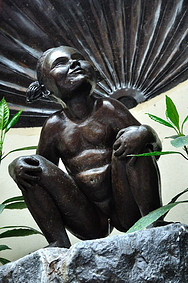 May not be as famous as Manneken Pis but the bronze statue is there in Brussels from 1985.It is the female version of Manneken Pis created by Denis Debouvrie. The statue of pony tailed sister is of the same size that of her brother. 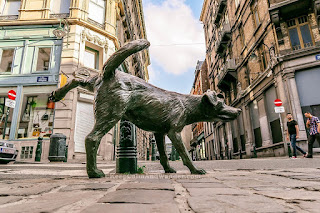 The bronze dog sculpture with a pee pose. Tom Frantzen created this statue in 1998 modelling his own pet dog. Out of three this does not actually wee but sculptured to look as if about to wee-lifting his leg onto a street bollard!