We all know that Thomas Edison is one of those persons in the world who has to his credit maximum number of inventions- over 1000! But many of us may not know that Edison was equally a shrewd business man who made a fortune with his patented inventions!

When the cinematic projector was invented in 1892 by his employee but patented in Edison's name, he ensured to receive his share of the huge money so generated as the people fell in love with movies on a screen! Soon Edison created Edison Studios at New Jersey which made a number of movies. But contrary to his expectations he could not continue that for long.

While Edison Studios was located in the east coast of US, a new location in the west of US  emerged out of blue to outsmart stringent patent rules of Thomas Edison. A name which was nowhere in the map of US thus far caught the attention of every film maker of that country-Hollywood!! Did Thomas Edison over drive himself forcing a handful of Jewish filmmakers in early 1900s creating Hollywood or was Hollywood  built on privacy? Little known history of Hollywood, a name or the sign of which is synonymous with world cinema and entertainment to this day! 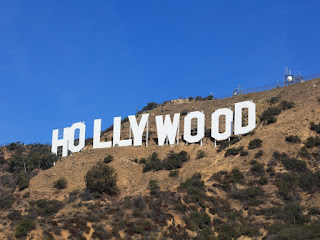 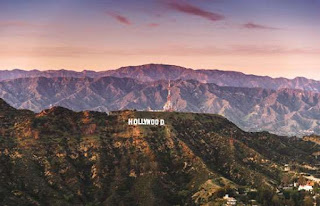 Big six studios of Hollywood...
Big six studios of Hollywood are 20th Century Fox, Warner Bros, Paramount Pictures, Columbia Pictures, Universal Pictures and Walt Disney Pictures as far as I know. These names are all very much familiar to me personally from my teenage days. When I got a chance to see some of the studios in person recently it was more of a nostalgic feeling for me. But I never knew a fact all these years. All these big time studios are owned by American Jews barring the exception of Walt Disney Pictures. They were mostly made from scratch at Hollywood, one of the neighborhoods of the city of Los Angeles, California. Another hardly known historical fact is that all these film makers ran away from east to west coast of US  from Thomas Edison who insisted to get his patent fees!!

Thomas Edison invents the cinematic projector....ends up with MPPC
In 1892 William Dickson invented the 'Kinetoscope' which is a cinematic projector. Since William Dickson was an employee of Thomas Edison, the later was obviously listed as inventor of the patent. Edison created his own studios which made a number of films. But he found that a number of film makers were trying to avoid his studio and patent laws to his disadvantage. Edison filed a number of lawsuits against many independent production companies, film producers and theaters in this context.

Edison also took initiative to form a conglomerate as Motion Picture Patents Company(MMPC) and forced rival production productions to join this. Finally a situation came wherein MPPC dictated almost everything-imposed fees and licenses on theaters and movie makers! But few among the movie makers were very unhappy and thought of a plan  to get rid of New Jersy, Edison and MPPC. Carl Laemmle of Universal Studios and Adold Zuker of Paramount Pictures were among them. They looked west of US ,somewhere close to Mexican border. In case Edison's men come after them at the the new destination, they have to disappear to Mexico!!Plus they were looking for cheap properties... 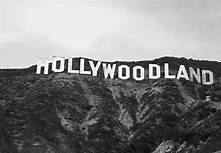 Hollywoodland was just a name in order to attract buyers picked up by H J Whitley who is considered as father of Hollywood who developed 500 acres of hilly land in the suburbs of Los Angeles in 1923.This place was handy for those  film makers to establish their new studios. Ideal weather conditions, varied terrain, cheap properties, no patent fees...all made Hollywoodland to make films. But above all, the main advantage was to vanish to neighboring Mexico in case Thomas Edison's men came citing patent laws!!

The new sign Hollywoodland which was erected on the top of Mount Lee continued to be there till 1943.That year Hollywood Chamber of Commerce was given authority to remove the last four letters and restrict to the name Hollywood which hangs till this day. As I understand it is a registered trademark owned by the Chamber of Commerce. If any film maker wants to include a shoot of the name, substantial monies are to be paid to the chamber! There are very few occasions where the Chamber has decided to change the sign of Hollywood for few days. Interestingly when Pope John Paul II visited Hollywood, the second L was covered to read as Holywood!! 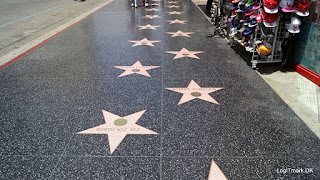 It was Whitley who also opened the famous Hollywood Hotel which is the site of famous Dolby Theater now which hosts the annual Oscar ceremony. As I was walking on the footpath of Hollywood Boulevard, over "Hollywood walk of Fame" where the celebrities of Hollywood and elsewhere- over 2200- who have made significant contributions to the world entertainment industry are embedded  in five pointed pink stars, my mind was full of nostalgic memories of early and mid 1970s during which I was in love with Hollywood!!
Photos: Courtesy Google images
________________________________________________
Posted by Chacko at 11:19