Elvis Presley, Chuck Norris and Jimmy Hendrix are well known American celebrities for me from my adolescent age but I never knew that they were descendants of native Americans until recently. Native American is the official and polite version of 'red Indian', the tag Christopher Columbus gave to natives when he landed in the Americas for the first time centuries back, the story is too well known to be repeated here. There are only few more such class of celebrities US ever had in any field, definitely not comparing to the vast population of native Americans US had or  over 5 millions of them as of now.

While I have all the appreciations for the Americans who built their magnificent country to the levels of what it is now in relatively a small span of time- around 300 years- I also wanted to know what has happened to the native Americans, who were original inhabitants of the land for at least 10000 years prior to new settlers, all these years. That's how I landed to Ishi, who is considered to be the last aboriginal native American in US. He passed away  in 1916 quietly in the protection and care of fellow Americans. But unfortunately that was never the typical relationship Americans had with natives! 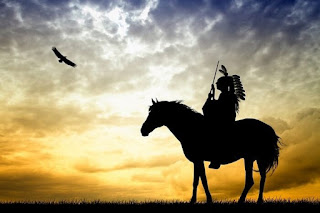 Christopher Columbus and Amerigo Vespucci...
Columbus never landed in the main land of north America in any of the four voyages he made. Under the sponsorship of Spanish monarchs Columbus, the Italian explorer and colonist, made his first exploratory trip and landed at Bahamas, Cuba and Hispaniola in 1492.He landed in Lesser Antilles in another trip next year while in 1498 he discovered Trinidad and north coast of South America. During his final trip he landed in central America- the strip of land between north and south Americas at present- in 1502.Columbus sincerely thought that the lands which he had found out were the Indies and named the indigenous people he met Indios (Indians).

Amerigo Vespucci was another Italian navigator and explorer who actually identified by his trips sponsored by Spanish king that the new world, Columbus discovered was not a part of Indies but a separate land mass.The name America is believed to have made after his first name in 1507.

Primary settlers in north America...Jamestown, Mayflower, Mayflower compact...
For more than 100 years after the new continent was discovered nobody went there from Europe for any sort of settlement. The first settlers arrived  from England with the support of the king James I and settled on an island which they named in honour of their king-Jamestown. The territory they named after England's late virgin queen- Virginia. That was in 1607.

In spite of the first settlement in 1607, American historical chronicles trumpets the second settlement of Europeans in US as the beginning of such settlements. It was in 1620 when 102 persons traveled in the enduring crumpled condition in the ship Mayflower. Among the 102, 19 were male servants ,3 female servants while few others were crew of the ship. During the difficult journey 2 persons- one passenger and one crew- perished while a child was born!! Passengers were in fact seeking religious freedom while settling on the new land. They were Christians known as puritans or pilgrims who were against Roman Catholic church beliefs while they could not agree to practices of Church of England(Protestant) either. The place where they landed was named as Plymouth since it was from Plymouth, England that their journey commenced!

Mayflower compact, a brief contract signed by 41 adult male pilgrims promising cooperation among the settlers, practice of their religious belief and general goodness of the colony of the settlement is considered to be the seed of American democracy.

After that settlement of 1620, tens of thousands of English puritans arrived in the new world. The Dutch came in 1626.Spanish started settlement more or less in the same period but in small numbers. Their actual settlements commenced in mid 18th century. Between 1850 and 1930 more than 5 million Germans settled in America. Irish, French and others poured in....many as indentured servants or bonded labor to the promising new world.

First Thanksgiving Day is celebrated but........
It is recorded in history that the English Mayflower settlers were welcomed by friendly local tribe of Wampanoag. But 50 among the Mayflower settlers died during the first winter. However they were helped by the natives which had the a friendly chieftain named Massasoit, to settle comfortably including teaching the pilgrims how to grow maize, corn and beans. After the first seasonal harvest, which was a bumper crop, pilgrims decided to spend three days of festivity, feasting and prayers. The local Indian tribe were their honored guests for the function, which was the first Thanksgiving Day in US!!

After 50 years , could be at the time of next generation after the death of Massasoit, all the warmth of the relationships between the settlers and natives had vanished. Enmity and mistrust came in between. War broke out in which 600 settlers and 3000 natives were killed. English fire power was proved too strong for the natives! Native chieftain at that time was King Philip, son of Massasoit- as named by the settlers whose actual name was Metacom, was captured and killed. His son, grandson of Massasoit, was prisoner along with his wife and 9 years old child who were taken out as slaves along with a number of natives to west Indies!! 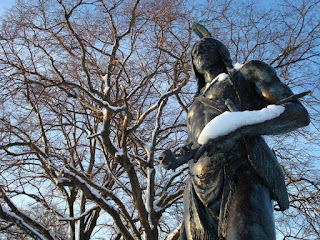 Statue of Massasoit at Plymouth, the native who helped the  European settlers.

Through out north America as the settlers came in, native Americans were forced to relocate to new places from own lands which they resisted. Skirmishes broke out which tuned out to be full blown wars. To make matters worse for the natives, the Europeans gave them some thing more. Smallpox, measles, typhoid and few other epidemics .I understand this was deadly for the natives in which millions perished. Nobody knows the exact number perhaps. This genocide continued in one form or other until 1924,when US granted citizenship to all native Americans.

You stay...I go!
It was in August 1911 that Ishi walked into American culture at Oroville, California from wilderness where he was leading a solitary life for 40 years. All his fellow natives of the tribe got killed or died, he didn't have any other choice. Ishi is identified as the last native American ever lived who is believed to have born between 1860 and 1862. 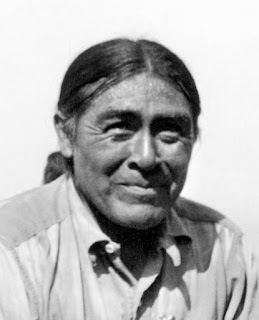 When he was asked about him name, he said that he didn't have any as there were none of his people to name him. He was named as "Ishi' which means man in his own language Yahi. He was taken care by University of California where he cooperated with professors and all the staff. Next few years he demonstrated his skills in hunting and spoke his tribal stories and songs. He was a gentle man. In 1914 Ishi was diagnosed with TB and on 25 March 1916 he died. His brain is preserved, body cremated.

"You stay..I go" is believed to have been his last words!!Was it a just a coincidence or did his last four words echo what he and all his native brethren thought of  settlement of Europeans in north America?