NOT 7 BUT 1010 TIMES!...The motivational story behind the success of that "finger lickin' good" chicken that we all know!!

Retrospectively from whatever exposure I have in managing corporate business, I would say now that Dreaming is the first step in the path of success. Dream is not something that you see while asleep. Dream is something that doesn't let you sleep, if I borrow a quote of late Dr.APJ Abdul Kalam. Second step towards success is Ambition. Ambition is the strong will to achieve your dream. If it is closely followed by the gist of the inspiring story of King Robert the Bruce and the spider which we all know-Never give up, keep on trying-one's third step is ready to step on. But how many times one should try?

The spider in the cave taught King Robert the Bruce and us to try seven times or more. Beaten on battle after battle six times, King could drive back his enemy on the seventh attempt taking a cue from the spider. But to be successful in modern business scenario this number need not be correct. However from my experience such a magic number doesn't exist while it  depends on the logical intuition from what one gets through the unsuccessful trials.

I want to share the story of a person who kept on trying without success in business 1009 times. But the 1010th time it clicked. Eventually his product became a household name in US and Canada, later Europe and now the whole developing and developed world. He himself became the brand ambassador of the product while his iconic photo became equally popular .Even a child would recognize his photo...

I have in mind the inspiring story of Colonel Sanders and his Kentucky Fried Chicken (KFC). 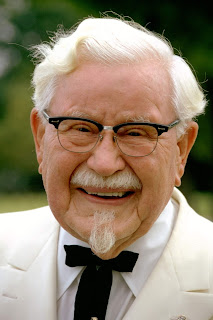 Farmhand to 'colonel'.......
Sanders was all along a small time salesman of tires and insurance ,fireman, blacksmith etc. since he was a drop out from the school in the seventh grade. His  financially poor family background forced him to go for a series of petty jobs. He tried unsuccessfully many petty business ventures as well. But he was a natural cook. His passion was cooking and loved it.

He acquired a petrol station cum service station with a small restaurant in Kentucky in 1930.As his food became popular he got rid of the petrol bunk and went for a full restaurant. Ten years after, around 1940 that he figured out how to pressure fry a chicken seasoned with selective herbs. His restaurant became more and more popular but his idea to sell his chicken recipe  based on a franchise model to sell to other restaurants did not click but kept on trying for years...Here I find Sanders a different person. Normally anyone would have  have been contend with the success of the restaurant or would have advertised more on the new recipe of the chicken he serves in the restaurant. But thinking of making a franchise out of his chicken fry, that too way back in 1930s shows special acumen he had in the field!

He was conferred with the title of Colonel by Governor of Kentucky in 1935 in appreciation of the quality of the food he offered in the restaurant. Honorable Order of Kentucky colonels is a long standing charity organization and nothing to do with the army. Buts that's when Sanders started dressing in white suit and black Kentucky bow tie which eventually got associated with KFC. May be here one can make a cue on his special way of dressing up. He wanted to stand out in the crowd and noticed, ultimately to his own baby-chicken recipe.

His changed modus operandi...
His pursuit to find a buyer of his franchisee chicken recipe KFC continued for 12 years without a tangible result. In 1952 he could make a deal with a restaurateur  friend. That was in his 1010th attempt! His royalty was 5 cents a bird sold. Sanders could make few more similar deals locally but that was when he had to face some more unexpected hardships. 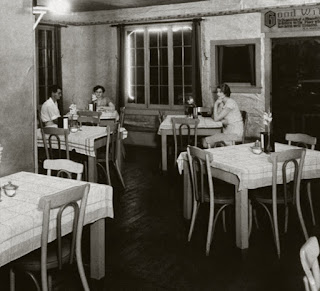 Inside the old restaurant of Sanders at Corbin, Kentucky

A new interstate highway bypassed his restaurant. He had to sell off his location at a loss in 1956.A business which he expected to stabilize and grow had to be abandoned. His monthly social security amount of $115 per month was his main income....

Having no base with an office or a kitchen in his case he changed the style of operation- selling/marketing of his franchise- to be more practical. Again I find a different person in Sanders in this matter. Than waiting for more resources which he knew is not a possibility he decided to try with what he had. He used to travel with his wife in his car, packed with few pressure cookers, flour and spice blends !He would offer to cook his chicken in any restaurant and made a deal of franchise if the owner of the restaurant liked the taste and his terms. It clicked. KFC started in operation in many places of US and Canada without long. Business prospered. America started loving his chicken with 600 franchised outlets!

Sanders sell his company....
In 1963 Sanders was approached by a lawyer of a venture capitalist named Jack c Massey who wanted to purchase the franchisee rights. Sanders who reluctantly started the negotiations finally agreed.

He sold his company for $2 millon. Under the contract the new company KFC will establish its own restaurants around the world and would not compromise the chicken recipe, one thing Sanders was not ready to compromise. Sanders would be paid $40000 as salary ,which was later increased to $75000 along with a seat in the board. He was also given majority of ownership of KFC'S Canadian franchisees. Sanders in turn had to work as brand ambassador for the new company, which is definitely not a win win situation.

Sanders was 75 then while some observe later that he didn't bargain the deal well. But for Sanders his own chicken recipe counted more than the money. He wanted his chicken recipe popular all over the world than anything else. If one goes through history of many famous painters , writers, movie makers the same thing had  happened. Others than the creators  made multi millions out of those creations. KFC chicken was an artistic creation for Sanders!!

KFC goes multinational...
KFC went public in 1966 and listed in NYSE in 1969.3500 franchised restaurants were in operation world wide when Heublein Inc acquired KFC corporation in 1971.The deal was through for $285 million! Sanders had a bad time with the new owner, it is recorded. Heubelin Inc was acquired by Reynolds in 1982.In 1986 PepsiCo. Inc took over  KFC which they purchased for for $840 million, the reason why one was offered only Pepsi and related drinks there. Again in 2002 till this time Yum! Brands is the owners of KFC along with other popular brands like Pizza Hut and Taco Bill and has a  turn over which runs into multi billions.

Sanders died at the age of 90.

Next time when you pop into one among 20000 KFC outlets in 125 countries, for that "finger lickin' good" chicken, just think nothing good is created easily.