MASTERLY SKILLFUL..... BEAUTY AND SCIENCE IN MAKING THE BIGGEST HANDICRAFT IN THE WORLD!


Any one who passes through the well laid out sea side corniche at Doha cannot miss the beautiful sights of dhows-large seafaring vessels- anchored or on sail. For years I have enjoyed this while driving around the sea side or more closely while making customary weekend evening walks along with my friends Kutty and Thomachen. Always these dhows also used to invoke in me about the high skilled craftsmanship required in building them where the Indian connection comes. The Indian inborn talent in craftsmanship is not limited to just stone masonry, carpentry or black smithy or technical skills as known to others. It can be extended to many other trades as well. One such talent- not known to many- is dhow making. Dhows are large wooden ships that can be seen in the Arabian Gulf or Arabian Sea. All Arabian Gulf states boast a maritime tradition with these dhows which were used for trade or pearl hunting.

In fact Al Balagh, the company where I had been working, was instrumental to build a port office building at Doha wharf exclusive for dhows, years back. To this day dhows are being used to transport loads of merchandise between most of the countries in middle east and along the coasts of Africa. I am sure that most of us do not know the fact that these wonderful vessels traditionally were built in India and exported to Gulf states. Although dhows are built these days indigenous  in most of the Gulf states, Indian participation in the form of skilled labor is a likely possibility. 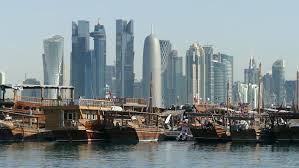 Used in Arabia ,built in India....
Dhows are large sea worthy vessels primarily used to carry heavy merchandise along the coasts of Arabia. Still they do. In Doha one cannot miss the sight of a number of dhows anchored at the corniche any time of the year. There are modern berths dedicated for the purpose these days.

Now built in few places in Gulf states, the origin of such dhows- locally known in India as Uru-can be traced to a place named Beypore in Southern India. Over 1500 years such sea vessels are being built and exported from this place.Using the same old spice route which existed connecting ancient India , it is recorded that Arabs, Romans and Sumerians used Beypore as a trading post and boat building yard.

Dhow making...kept as a family secret in India.
Possibly dhow can be the biggest handicraft in the world! The art of dhow making in India is limited to only few families of master carpenters. It is an art but kept as secret passed down through the generations! For the same purpose there are no sketches or drawings or blue prints. From conception to completion it is only in the mind of the master carpenter although a number of skilled carpenters 30-50 at a time will be used in making a dhow. Another interesting fact is that dhows are traditionally built with out any machine tools. Even nails are not used to ward off corrosion while in  sea water!

In water the vessel dip exactly up to the water mark earlier drawn by the master carpenter after making many mental calculations! It is simply amazing to believe that even these days of computers this tradition holds fast! 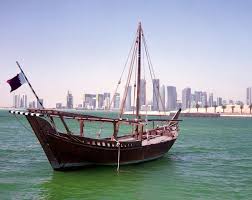 Why Beypore?
The small town of Beypore, is very close to Kozhikode(Calicut) in South India. Beypore is by the side of a river Chaliyar which leads to the Arabian Sea and rest of the  world.

It is also just about 40 kms away from Nilambur forests where good quality of teak is grown naturally to this day. The British while colonized India made teak plantations here, the first of its kind in the world. In order to plunder the teak logs en masse the British laid out a railway track deep into this forest town much before it was done so elsewhere in the country. The quality teak grown in this place is so well known to them that in 1805 Lord Nelson decided to build ships in his fleet for Trafalgar with this timber! It is the most corrosion resistant timber against sea water. These years teak also is imported to Beypore from Malaysia for the purpose making dhows to make it cost effective.

Already I told that no nails are used in making traditional Urus. In place coir, made from husk of coconut is used which is locally manufactured. Above all, the skill and craftsmanship was available at Beypore to conceive, execute, commission and launch these large vessels. Right from floating restaurants to cater to the needs of international tourism, to miniature wooden models as curios are made here these days. 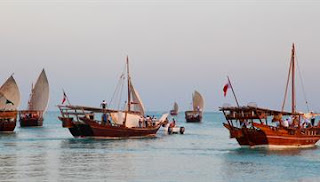 Dhow festival at Doha....
For the last couple of years Annual dhow festival is conducted at Doha to reflect the country's rich maritime heritage. About 100 dhows of different sizes, shapes are exhibited here which were once used for trade and pearl hunting which is not only attracted by the locals but from neighboring countries as well.
Phots: Courtesy Google Images.
-----------------------------
Posted by Chacko at 09:35