When two Russian words -perestroika and glasnost- meaning restructuring and transparency made headlines of international media in 1985, little I thought about it more than reformation taking place in the administrative pattern in communist regime in erstwhile USSR. There were rumblings of discontent reported but I thought it was the tricky work of western media as usual than true  happenings.

Collapse of communism in USSR was never expected by me. But I think at least that was the case with most of the people elsewhere in the world except perhaps with those in old USSR itself and other communist countries which followed suit! On December 26, 1991 the declaration number 142H of supreme Soviet of the Soviet Union officially granted self governing independence to its 16 member republics....

It is 27 years now since then. When I could visit Moscow few weeks back, I was expecting a Russia which has not yet come out  of the malnourished economy and shortages in consumer goods it inherited from the old regime. But again I was wrong. I could see a reemerging Russia...Moscow was just great with its well preserved old churches-with what is left out by the earlier regime, majestic museums and art galleries, well laid out wide roads but with traffic snarls. All the luxury cars are plying  on the roads-Mercedes, BMW, Porsche, Bentley...all the major brands except Russia's own brand Lada!!Hypermarkets were full of local goodies and world renowned brands, places of eat outs were just grand and people were dressed well....

Yet at Moscow one cannot miss two icons of the old USSR which stands loud and clear even now. The metro and 'Stalin's seven sisters'. While the grandeur about the underground metro at Moscow which is built as back as in late 1930 s  is known to many, I do not think people know much about the 'sisters of Stalin', so nicknamed by the west...... 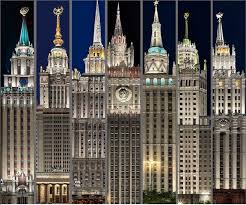 A bit of nostalgia....
During my childhood in India, three foreign countries about which I used read a lot were UK,USA and USSR, in that order. While UK was familiar to me as England, USA was America and USSR  Russia. I think I used to know much about them than our own neighboring countries and for that matter even our own north eastern states in India! Could be that status even now with the exception that USA takes the lead position leaving others way behind!

My brother and I used to have access to United States Information Service( USIS )free- for- all publications. Monthly periodical of  Soviet Land was a similar tool of USSR freely distributed. I did not know then that those were distributed for propaganda but was eager to get them  and was being delivered home free. While USIS periodicals highlighted the success of free press, free market and free economy, Soviet Land trumpeted success of application of communism in their economy, controlled market and quality way of life of the people! I did not understand both of the situations much as I was young and  not hooked to habit of reading those days but found useful to show off among school friends! Other use was also there like my sister said the other day nostalgically that 'Soviet Land was a good magazine for covering her  text books'!!From UK I do not remember having read any particular publication regularly but in later life while in Qatar I used to regularly visit library at British Council for almost a span of 25 years and read books on  all topics of my  own interests! And I have to admit that I stand today fully benefited from such a habit of pre internet days.


The Russian revolution of 1917 is recorded in  the history of the world not only  for overthrowing the imperialist empire there but introducing a new political system in place. Based on communism articulated by two German thinkers Karl Marx and Fredrich Engels in the mid 1800s,a communist country was born here for the first time any where in the world! Communism- as far as I know- is essentially a political and economic system where a single communist party had absolute power over Government. Eventually under different circumstances more and more countries joined this group led by USSR. At its peak by the mid 20th century, when I was young, it even appeared that communism could supersede democracy as the main ideology. But towards the end of the 20th century, contrary to everyone's expectation, it nose dived to very few places...

Moscow skyline under Stalin....and 'The Palace of Soviets' which never came up!
When New York skyline namely the Manhattan got all the attention of the world in early 1930s with marvelous skyscrapers including Empire State building, it seems Joseph Stalin, who controlled the communist party after Lenin, also dreamed of such a skyline in Moscow .The Palace of Soviets -the plan to build the tallest building in the world with 415 meters, last 100 meters with the statue of Lenin was launched at Moscow. The site for the same  chosen by Stalin for his own strange reasons was the very place where a famous church named as Cathedral of Christ the Savior stood. In 1931 it was dynamited to make way for the foundations of 'The Palace Of Soviets'! It seems the communists while in power have destroyed quite a number of churches all over the country in one pretext or other!! 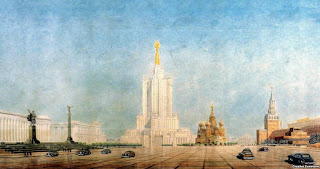 'The Palace Of Soviets'-see how it would have looked from
Red Square, an unfinished dream of Stalin!

But the ambitious project had to be abandoned without long as world war II broke out. Stalin could not take up the construction of his pet project never again. It could be a irony that even before  fall of communism all the giant statues and photos of Stalin were removed in the country! And a new church was built in Moscow at the same site by the Orthodox Christian community by 2000 which stands to this day!!

Winning the second world war over Germany was a boost for Joseph Stalin to emerge as a world leader and  stamp his boots over his critics in USSR. Though his dream of of making The Palace of Soviets -his eighth sister- never became true, he could accomplish the idea of construction his 'seven sisters'.

Stalin's 'seven sisters'.......
Joseph Stalin wanted to show his own people and rest of the world that USSR has not become bankrupt due to war. He wanted to showcase -the wealth and might- of USSR.As he was influenced by Manhattan high risers, Stalin wanted and expected visitors to come to Moscow as well and gasp looking at his creations. I think he has succeeded in that matter. I was gasping seeing them even 70 years after those were built !!!

Stalin is believed to have been particularly influenced with the architectural features of Municipal Buildings at Manhattan which came up as early as in 1914. This could be true or false. But the interiors are definitely very different. Choosing the best of Russian architects and best of his own liking which was Gothic style of architecture, he went ahead. Seven buildings -huge and stylish-were constructed between mid 1940s and  early 1950s in key locations of Moscow.  It includes the famous Moscow state University, Ministry of Foreign Affairs and others. As one drives past, I am sure that the looks of the buildings exhibiting the logo of the communist party-hammer, sickle and star- to this day, invite one's eyes. It looks different to Manhattan towers with long spires top  of which rests a Soviet star. All of them looked impressive to me albeit the architecture is a bit different to surrounding buildings which are equally good but not massive as these seven sisters

The seven sisters are built with highly decorative facades, luxurious interiors and intricate stained glass works. I wonder why I did not read about it earlier! Was it because the western press did not want to give credit to communism or USSR itself did not want to give wide publicity for this wonderful seven sisters because it was also a show of unnecessary  opulence which basic communists are against? After Stalin's death the Soviet Govt issued a decree condemning the architectural excess and put an end to the practice of having such buildings ! 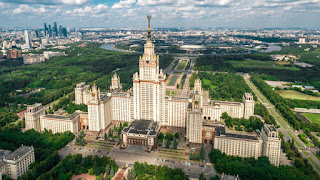 Moscow state University- one of the seven sisters.

Almost all the buildings have underground bunkers, may be because  built soon after the war. Some of the buildings are said to have been completed using forced labor of prisoners or POWs. Again it is difficult to find out the truth since the world is controlled now by western media and they were and are not fair when reporting subjects not to their  tastes!