Athens is not like London, Paris or Rome. It is unique in many ways to this day comparing to other European capitals or even other Mediterranean cities. At least that was the impression I got when we- Geetha and I- had a chance to visit the place. May be because it is the oldest living city in Europe and for that matter one of such places anywhere in the world.

Athens can boast of its many contributions which have made the ancient and modern world a better place to live. I think nobody can challenge that fact. We all know that it is the birthplace of recorded history, theater, philosophy and many aspects of Mathematics and Science. Nobody can forget the fact how Olympics originated and revamped in 1896, with its first and majestic Panathenaic stadium in marble which is kept at Athens to this day. But what I would give the best of all the contributions of Athens made to the rest of the world above all, is democracy! Demokratia in Greek from where the word democracy originated means peoples rule!

Athens has given birth to at least three great philosophers ever lived- Socrates, Plato and Aristotle. Here I think I have to note that Athens also gave a very infamous person-Draco. If one cant recognize this name of the person all of a sudden, I wont blame anyone because it is not him but what he made became so infamous. 'Draconian' laws anywhere to this day is blamed after old Athenian lawmaker  Draco who lived 2600 years back! Few musings from Constitution Square, Athens... 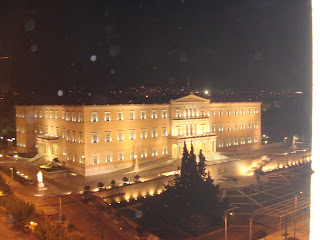 Greek Parliament clicked through a glass door from the hotel room

The Grand Bretagne....
There is a central square in the city of Athens which is interestingly named as Constitution Square. This is also where the Greek Parliament is located. We had the chance to check into a pretty old but good hotel The Grand Bretagne, almost diagonally opposite to the Parliament building. If it was in other countries including India, we would not have got such a place to live so near to a Parliament building because of security reasons. Anyway we could enjoy the sight of the Parliament building in day and night  including the famous change of guards which happens every hour of the day and night. In the night the building looked more serene which forced me to take a click. The above photo was clicked in the middle of the night from our room through the glass door leading to the balcony, overlooking the Parliament! No doubt Athens is a very friendly location for tourists. From the roof top terrace coffee shop of the same hotel one can enjoy stunning view of Acropolis. 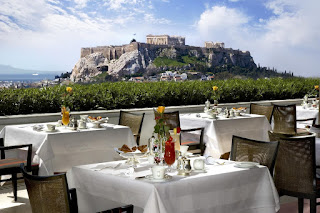 Back to democracy of ancient Athens...
I shall go back to 'democracy'. Many basic political terms commencing with the word politics itself originated from Greek language.Monarchy,Aristocracy,Oligarchy,tyranny and of course democracy...all have roots in Greek.

Draco was the first recorded legislator of Athens who lived in 7th century BC.He was requested by the aristocrat citizen of Athens-mostly rich and the privileged- to chalk out a written code of laws to be enforced replacing the prevailing oral laws. Draco did his job but was characterized by its harshness. He gave death penalty for most of the offences whether trivial and serious crimes. His name became synonymous with brutal,harsh,severe laws which lingers to this day as 'draconian' laws!

Thanks to Solon and few others, in 5th century BC,in and around Athens, the first known democracy came to existence. It is definitely a wonder how the people of Athens thought of this great idea and implementing into a democratic form of Government when rest of the world was under mostly autocracy or in wilderness. It had few short comings such as women and slaves were not permitted in the voting. Instead only Athenians who owned landed property had the right to vote. But the great thought of democracy centuries back is what I admire about Athens...

Democracy now in the world....and in India
It is said that if a nation conducts free and fair elections, it can be classified as a democratic nation. Of course different political parties with varied interests should be able to take part in the elections. While India is considered to be the largest democracy in the world with its teeming population of 1.3 billion, it is yet to top the list in quality- as per chart of democratic index. According to the same index Scandinavian countries like Norway, Iceland and Sweden are the most democratic ones as stands on date. They are reaching perfection in this matter with scores of 9.87,9.58 and 9.39.

India has a score of 7.23 against US 7.98,France 7.80,Greece 7.29 and Pakistan 4.26.It is understandable considering the large population of India consisting of different classes of people. But it is to the advantage of India that democracy has taken deep roots in the system while economically the country is getting richer year by year. India is one of the richest nations in the world while a lot of poor remain in the country. But I firmly believe that only  when this richness of the country  goes to people and reflect in their standards of living, only then the true democracy triumphs.It may take few more decades but sure to happen.