If you think that the well known phrase given in the title has originated in ancient Hebrew scriptures or any other religious texts - whether Abrahamic or Dharmic- as I used to , you are wrong. It is a paraphrase of a law as given by Hammurabi, creator of one of the earliest codes of law ever made on earth, in 1750 BC! Roman and Greek philosophies on codes of law flowered  later. Indian came out much later. And if you haven't heard about this Hammurabi, I will not find anything wrong with you either since I too didn't until very recently.  But once I started reading about it I was amazed which I want to share with you.

The Americans  have identified this Hammurabi pretty long back. His head is figured over the gallery doors of home chamber in the US Capitol building, Washington DC as one of the historical few who have influenced in forming the American law! So also a replica of stele -or stone pillar in simpler term-  of Hammurabi is placed in the HQ building of the United Nations and the original stele which is  at the world famous 'The Louvre' at Paris. I didn't notice that when I visited them. Justinian the great of Byzantine and Napoleon Bonaparte of France along few others have been identified as heavily influenced by the legal codes of Hammurabi! Almost all the countries of the world have referred to this code of law before they could finalize their own even in the modern world! I am sure that he must be a topic to be studied in law schools.

Paul is my schoolmate but a dropout. He couldn't continue studies for some unknown reasons. He is native of my own city but lives in a suburb. The poor fellow had to struggle a lot in life to make both ends meet. Still he does. He is two years older to me. I got into regular contact with him over telephone, once I came back from Doha. I have found out that his level of knowledge on history and geography of the world is outstanding which we used to share and enjoy. He says that he picked up the habit of reading soon after he had dropped out of the school, taking books from local library and purchasing a few on his own if possible, while doing sorts of errand jobs for a living. Finally he  had a good collection of such books but none of his immediate family members were interested. Finally he donated them to the library from where he used to take books!! Paul is  materially a poor man but good hearted and has a covetable wealth of knowledge which he failed to make use in this world. It was this Paul who tipped me on Hammurabi albeit it was a just a tip of an iceberg. Strange are the ways of this world! This article  is dedicated to my friend Paul.... 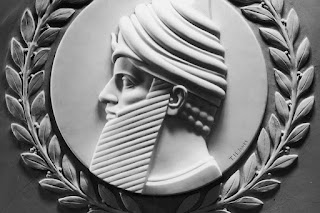 Hammurabi as exhibited at the Capitol

Oldest Civilizations...And Hammurabi emerges...
Earliest civilization of the world is Sumer followed by ancient Egypt, ancient India(Indus Valley),Minoan (Island of Crete, Greece), ancient China and ancient Peru. Sumerian civilization existed in the  Mesopotamian region named Babylon which was between rivers Euphrates and Tigris around 4500BC.In the current world this part is located not far from south of Baghdad in Iraq. Most of the ancient civilizations existed on the banks of perennial rivers and Sumerian civilization is not an exception.
After the end of Sumerian power, as the sixth king of Babylon Dynasty comes reign of Hammurabi between 1792-1750BC.He successfully conquered the adjoining kingdoms to his domain. Under Hammurabi the city of Babylon became the most powerful city in the world. Along with  notable infrastructure projects the city was known to have flourished with Science, Art, Music, Mathematics, Astronomy and literature. As he conquered more and more land and his empire grew to be the biggest in the region, he also saw the need to have  uniform civil laws to unify the various groups he conquered. He sent legal experts and collected existing laws and compiled and modified them to have his 282 laws to be implemented under his empire.
Stele of Hammurabi codes...
Louvre Palace or simply known as The Louvre is the most visited art museum in the world. It is located at Paris on the right banks of Seine with  magnificent palace buildings of 12th century. It also has a modern glass pyramid which has become iconic with the museum designed by I.M.Pei who has also designed the Islamic Museum at Doha in Qatar. 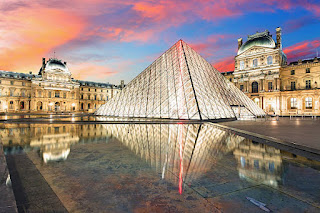 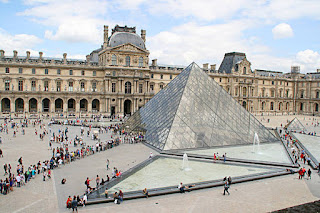 The Louvre,  Paris
Monolisa, the most popular painting of Learnado da Vinci is the star attraction in this museum but it is to be noted that Stele of Hammurabi is considered to be one of the most precious possessions of The Louvre!
It was a French explorer named De Morgan in 1902 who discovered the stele which was found in three huge pieces in the ruins of Susa, presently in Iran which finally landed in this museum. The top of the  stele figures an image in relief of Hammurabi with Shamas, the Babylonian Sun God and God of Justice. Hammurabi claimed to have these laws given by Sun God. The codes were written in Cuneiform script, old Babylonian dialect of Akkadian on a basalt slab The stele is 8 feet high. 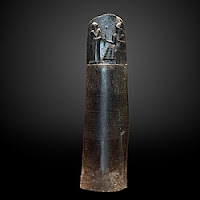 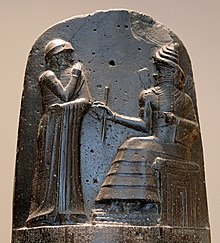 282 laws of Hammurabi...
His code consisted of 282 laws which I have read myself. May be the fact that  it is around 4000 years since these are made, some looked very blunt to me while some are progressive. But he has covered very large areas such as civil behaviour, penalties for stealing, rules for adoption of children, marriage and even divorce !It also covers wages, trade norms, rental and definitely slaves. Hammurabi states that he wants "to make justice visible in the land, to destroy the wicked person and the strong might not injure the weak"!! I am sure that all these phrases are read many times over in your life time without knowing the originator!
An eye for an eye or a tooth for a tooth refer to the logic that people should be punished according to the way in which they were offended. If they hurt some one they should be hurt equally bad in return. When you come across this phrase next time..think of Hammurabi, the Babylonian king !!
_____________________
Posted by Chacko at 10:40