VINE TO WINE...SUCCESS STORY OF THE FIRST INTERNATIONAL BUSINESS WOMAN

Not far from Paris is the region of Champagne in France. As we all know that  the wine where it is grown, fermented and bottled within 100 miles of this region is exclusively known as Champagne. The wine made out of this region but in France is known as cremant, if you don't know. It was a French monk in the 17th century named Dom Pierre Perigton who is accidently credited with the creation of Champagne but has gone through a lot of improvements to have reached the current status which also includes that the cork while opening could attain a speed of 64 km/hr !

Here I am not trying to market Champagne or comparing it to its German version known as Sekt or Porsecco the Italian or Cava the Spanish. Nor why this bubbly beverage I like the most in its class,  but to write about Lady Veuve Clicquot, the first international business woman who made her name out to this world as creator of best known Champagne. And how she became  known as 'Grande dame of Champagne' from just a veuve (widow in French) in an era where the women were largely ignored in all fields including business!

In spite of the fact that she could create history with a best known brand in wine industry, she is largely ignored by the mainstream of history. I think it is more because it was men who wrote history in Europe in 1800s than the fact that she was much ahead of her time.

All Champagne is sparkling- but not all sparkling wine is Champagne! 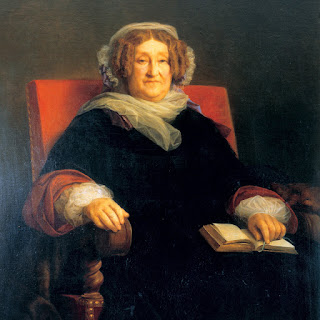 How Barbe-Nicole became Madame Cliquot...
Her name was Barbe-Nicole. She was born and brought up in a rich French business family. At her age of 21 in 1798 she was married to Francois Cliquot by arranged marriage. Interestingly her marriage took place in a wine cellar owned by her husband. Family of Francois was in textile industry albeit they had few interests in wine business. Unfortunately Fracois died of Typhoid in 1805 making her a widow at age of 27 with a three year old daughter! Definitely that was a time a woman could not even hold a bank account, forget about running a business!!But Barbe Nocole decided to take the rein of her husband's wine company against all such odds while her father in law thought of selling off the company.
A series of innovations and inventions...
That's what Madame Cliquot did. Her continuous pursuit to improve the quality of her products and her innovative mind to achieve the best in any circumstances is remarkable. Her motto was "Only one quality, the finest!". This is something which is palpable for me. Quality of the projects/products of the company where I was a CEO for 21 years was of prime concern from inception. But when we reached a position where an official motto was required in 1993 to grow bigger, what we selected from a lot of proposals was "Quality and Professionalism" in which I firmly believed.
A vintage champagne is when  all the grapes come from one particular vintage(year). But then it is kept for a minimum period of three years to a maximum of ten years to the best of my understanding. In 1810 Veuve Cliqout came out with the first vintage champagne which was noticed by the consumers. One day in 1816  she ran to her cellar storage and asked to take her kitchen table and make holes to fit  wine bottles to the utter surprise of her staff. She then placed the wine bottles upside down in an angle. She rotated the bottles each day and the sediment collected in the neck of the bottle was much easier to be removed than the bottom. Her method of ridding table process was a success. The crystal clear champagne of her brand was a hit in the market!! She came out again as a first to make Rose champagne which is a blend of red wine with white in 1818.
A great comet appeared in 1811 over Champagne province and nearby areas in France. Wine makers believed that this type of astronomical event had an effect on weather conditions to make the grapes the best suitable for wines. I think this has no base on science. But that year onwards many wine makers produce comet wines! It was Tsar Alexander of Russia  who declared that his brand of champagne would be Veuve Cliquot Cuvee de le Comete. Thereafter by 1831 the fame of her champagne spread from New York to Saint Petersburg...from Paris to London with iconic yellow label without perhaps who was behind it !! 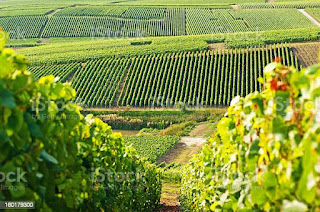 Veuve Cliquot vine yards and cellars
Act with audacity...
In 2010 a group Finnish divers found out few bottles of Champagne including those of Veuve Cliquot beneath the Baltic Sea. It was from a Canadian ship which wrecked in 1913.The bottles were tested and found out to be still drinkable. It was sold in an auction. A bottle of Veuve Cliquot got a price - a  whopping  30,000 British pounds, the highest ever in the world for a champagne bottle!!From 1987 Lois Vuitton Moet Hennessey group has acquired the ownership of Veuve Cliquot.
From 1972 onwards an award named 'The Veuve Cliquot Business Woman' is being presented to the best successful women entrepreneurs. What she wrote in 1860 to one of her great grand daughters is what she was essentially in business. Quote. "The world is in perpetual motion and we must invent the things of tomorrow. One must go before others determined and let your intelligence direct your life. Act with audacity" Unquote.
________________________________________________