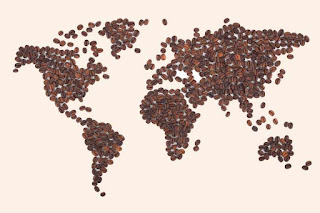 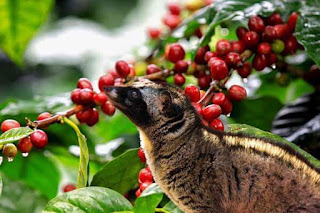 From Ethiopia to Yemen and rest of the world..
Nobody knows for sure how coffee was introduced to the world.It is believed that  Ethiopia is the place of origin where the local shepherds noticed that their goats got excited after eating beans of certain plants! From Ethiopia the beans were introduced in Yemen in 15th century  where it clicked.Coffee traveled all over Arab land which is even now named as 'Qahwah'.Qahwah became 'Kahve' in Turkish and  to 'Koffie' in Dutch, 'Caffe' in Itay and finally 'Coffee' in English.It was in South  that coffee was introduced in 1670 in India from Yemen.We call coffee as 'Kapi' to this day.
It is equally interesting to know that coffee was banned at least three times in the world but thankfully those bans were lifted soon after.Around 1511,coffee was banned in Saudi Arabia since some of the Muslim leaders thought it had unusual stimulating effects.But for Pope Clement VII in the 16th century,coffee would have been banned among Catholics.Some of them thought coffee is 'devil's beverage' and took up the matter with Pope who didn't accept the claim.King Charles II banned coffee shops in 1675 since he thought people gathered there to conspire against him!
It is strange but true that French philosophers Voltaire and Rousseau were ardent coffee lovers while the great Beethoven used to have always coffee with exactly 60 beans!!In 1735 the great musician J S Bach had made a song dedicated to coffee titled 'Coffee Cantata'!
Coffee is traded more than gold!
'Coffee..Better latte than never' is a proverb anonymously related to coffee.I have borrowed it because of the humor sense in it and credit goes to who ever had coined it.
ICO- International Coffee Organisation having 51 members as of now is head quartered in London.Set up in 1963 ICO administers International Coffee Agreement  negotiated under United Nations among the member countries.
As a commodity, coffee is traded globally to the tune of more than $ 100 billion a year next to crude oil,above natural gas and even gold!Like many commodities in such cases, though coffee is grown mostly in poor and developing countries, its pricing and futures are decided in the stock exchange floors and board rooms of the wealthiest nations!It remains a fact that while we enjoy the drink world wide, those coffee farmers mostly remain more or less poor!!
While Brazil,Columbia and Vietnam remain the first three major coffee exporting countries, Europe, US and Japan consumes 65% of world's  coffee!!Finland and Sweden tops as countries in consumption of coffee!
When you visit a Starbucks or Lavazza coffee house or watch a barista doing his or her expertise next time anywhere or when you have a cup of coffee at the leisure of your home, remember that coffee is more than a drink, a culture!
Photos :courtesy google
Posted by Chacko at 10:00