As the world today remains stunned and frozen over the unprecedented,unexampled,bizarre... attack of Corona virus I was in doubt whether I should skip publishing an article on first day of this month  which has been the practice for the last eight years but decided against it.I am also intentionally skipping any topic related to this virus, the net result of which can be summed up in just three words-we are humbled!Instead I am coming out with a success story of an Indian which is not known to most of us....a name which has to be sung to the world!

Mount Everest stands majestic at 8848 meters.All of us know that the mount got the name after George Everest who was the Surveyor General of colonial British India.Mount Everest was so discovered to be the highest not by George Everest but exclusively by an Indian mathematician and surveyor named Radhanath Sikdar. Kanchenjunga of the same Himalayas range was considered to be the highest peak till then.That was in 1852.

The finding of Sikdar is a fact well chronicled by the British but did not give much publicity for obvious reasons.Read about how the Great Trigonometrical Survey(GTS) was conducted by the British along the length and breadth of India between 1802 and 1871 .And how Sagarmatha (Napalese) Chomolungma(Tibetean) and  Zhumulangma(Chinese) which were the local names of the mount, while the British called it Peak XV,   was named to be Mount Everest.... 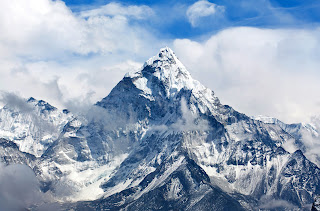 By 1799 with the defeat and death of Tippu Sultan,The East India Company knew that they were going to stay and rule India for more centuries, if not for ever.They devised better and scientific methods for collection of revenue, military dominion and systematic loot of the resources of the country. That is how they decided to go for surveys and cartography.They decided to venture into various surveys-Topographical,Geological,Trigonometrical,Marine and Revenue-of the lands they ruled in India.

I think it would be appropriate if I cite an example of professional looting of Indian resources by the British from my own experience.I was a Gazetted engineer in Govt service of Kerala -Public works Department while first posting was at Nilambur in 1975, a small town on the fringes of natural forest full of teak. I was surprised myself seeing good roads and excellent steel lattice girder bridges in the middle of the forests, while Nilambur was well connected by a broad gauge railway in early nineteens.Later only I came to know that the British colonists were regularly stealing the teak wood in bulk and taken to London and other ports as logs!This they had done for many decades.But for the various surveys conducted  which were executed in a professional way, all these loots would not have been possible.

Great Trigonometrical Survey(GTS)
Looking back now, GTS no doubt was a scientific and technical feat which the British could accomplish in India.It would be not fair if I hold the fact that successive Governments of India since independence have benefited from all these surveys conducted by the British, GTS being the most difficult to accomplish for any country, esp as large and complex as India!Many perished during that time due to Malaria and Tigers!

Conceived and led by Col. William Lambton who later became first Surveyor General of India, the East India Company had set only a target of 5 years for completion of this mammoth project which was commenced  at Chennai(Madras) in 1802.Actually it took another 70 years, well past the company rule itself in India which was taken over by British Govt in 1857. Lambton died due to Tuberculosis in 1822 while in active service. His position was taken over by George Everest who had joined the team of Lambton few years earlier.

George Everest and his team could successfully measure the meridian arc from Kanyakumari (Cape Camorin),South India to Dehradun in the north,a distance of 2400 kms!It was during the time of George Everest as Surveyor General that Radhanath Sikdhar joined the team.When Everest retired from service it was Col.Andrew Scott Waugh who succeeded him during the tenure of which Mount Everest was discovered to be the highest on this earth.

"Sir,I have discovered the highest mountain in the world"....Role of Radhanath Sikdar... 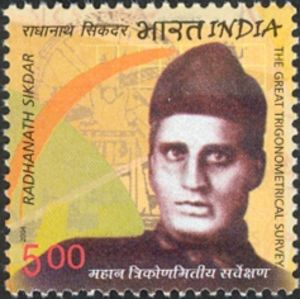 During the tenure of George Everest as Surveyor General of India, he was looking for someone who was proficient in Spherical Trigonometry capable to do complex computations of the data collected. Sikdar was a student of 19 at Presidency college(Hindu college),Kolkatta  when he was highly recommended by his  British Maths professor.He joined the great Trigonometrical team in 1831.After 20 years of his service while Col Waugh was the Surveyor General, he  started measuring snow capped mountains near Darjeeling in the capacity as chief computer.In 1852 after compiling the data from six different observations,Sikdar came to the conclusion that Peak XV is the highest in the world and not Kanchenjunga as believed.It has to be noted that Sikdar measured the height of the mount without climbing on it.He did  these surveys  in fact about 100 kms away! He was 39 then.

After reporting the same to Col Waugh about the finding, he did not disclose it to public.It took another 4 years for Col.Waugh to convince himself about the finding and announce it to the world.It was Col. Waugh who named the peak as Everest in honour of George Everest, his earlier boss but who had done a lot for the successful Great Trigonometrical Survey of India.

Both Everest and Col.Waugh used to appreciate the high quality of works carried out by Sikdar.'Mathematician of rare genius' was opinion of George Everest about him but in spite of all this consideration, his bosses did not give the position he really deserved.  India released a postal stamp in honour of Sikdar in 2004.Than keeping his name among the list of those Indians who are unsung and forgotten for the great works done in the past, I am of the opinion that his name is to be sung to the world!! Than blaming the good old colonial masters even now, it is the duty of each Indian to work in this direction.