JACQUES JAUJARD........THE NAME WORLD SHOULD NOT HAVE FORGOTTEN!

I distinctively remember having seen an English movie titled 'The Train' during early seventies at Kochi. It was a fantastic one which I keep close to heart even after almost 50 years because of a nice theme and acting talents of Burt Lancaster.The film is made around French resistance fighters trying to stop the Nazis taking a train load of paintings and art treasures to Germany.It was a box office hit.But I never gave a serious thought to such thefts of art works albeit a number of films with similar stories I have seen .....

When I could visit the Louvre at Paris many years later,I was impressed by the museum, one of the best of its kind in the world. But then also for some reason it didn't register in my mind that those valuable art treasures exhibited were kept  hidden from plundering of Nazis only because of the forethought and determination of one man....

Jacques Jaujard....It is most likely that you haven't heard this name before.Neither did I until recently.To introduce him in one sentence -he is the man who successfully masterminded and executed safe evacuation of thousands of art objects from the Louvre and other parts of France -Mona Lisa included-just 10 days before second world war broke out!What he and his aides did was an unprecedented adventure of extreme secrecy which will outshine any thriller story.

Jacques Jaujard...the man who saved the Mona Lisa and the Louvre!...the name world should not have forgotten!! 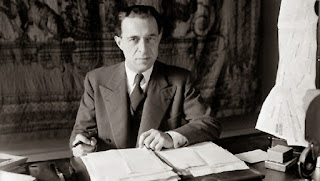 The Louvre....mostly plundered or loot but exhibited majestically!
The Louvre stands majestic at Paris.With the iconic glass pyramid-designed by American Chinese architect Leoh Ming Pei- at the entrance,who also designed Islamic Museum at Doha later,the museum is home to more than 35000 most famous art objects of the world.From 1973 to this day millions of visitors-six million people each year as of now- have been visiting the place where Mona Lisa, Venus De Milo and Grand Sphinx of Tans are exhibited among thousands of others.I think more than by donations or buy outs, most of these art objects are collected by plundering and loot, right from days of Napoleon's army!Being an Indian I am not surprised.Many most valuable art objects exhibited in British museums are thus taken from India,the most adorable adornment on British Royal crown- Kohinoor jewel included!!

France falls to Nazis....
Paris fell to Nazis in 1940.One of the earliest decisions Adolf Hitler took soon after was to dispatch his man in charge of art objects,Count Franz Wolff Metternich to The Louvre to repossess invaluable collections of the museum.As he entered the museum he could see only empty walls and halls, all the art objects-paintings, sculptures gone...Contrary to expectations-Jaujard had noted in his diary-Count Franz looked relieved than angry or perplexed to see that the art objects had been taken care of not to fall into the hands of Nazis.Count Franz, a German aristocrat,happened to be a true art lover above  his love for Nazism!

Fuhrer museum...uncompleted dream of Hitler!
Hitler had plans to build a massive and the biggest museum to be named as Fuhrer museum at Linz,Austria where he was born.He sincerely believed that the finest art belonged to Germany which were looted by Napoleon and during the first world war.He had made the blue prints ready by leading architects.One of the objects of the occupations of German forces was the collection of world renowned art objects. 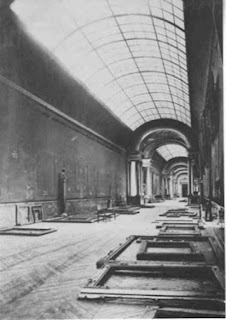 How Jaujard did it....
As second world war was getting imminent, Jaujard was more concerned about the safety of the art objects of France including those at The Louvre.At that time he was Director of French National Museums who silently but meticulously was planning a mass evacuation of those art objects in case France falls to Nazis. Interestingly nobody asked him to do that.And after all he was just an Govt employee.But in spite of these shortcomings he decided to put his secret plans to action with the help of hundreds of his loyal employees of the museum.

Jaujard categorized the art objects in order of importance. Yellow, green and red labels were allocated to them- yellow for major works,green for very valuable art pieces and red for world treasures.Mona Lisa was decided to be marked with three red circles!! He closed the museum for three days officially 'for repairs'.That was on 25 Aug 1939.Three days and nights Jaujard and his team masterfully packed up thousands of pieces of art.He had arranged a convoy of trucks, cars even ambulances to whisk these art objects to safe homes, mostly chateaux which were located in the French countryside which would escape damage of bombing.Though some of those locations where these art objects were hidden were revealed after the war,Jacques Jaujard kept the whole information to himself until his death!! 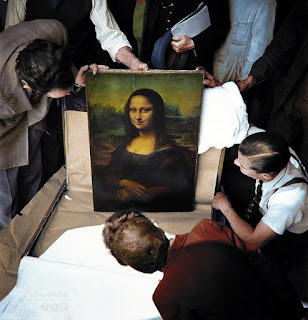 Mona Lisa....
It was recorded that Learnado Da Vinci's Mono Lisa, was moved five times during the war time till it was returned back. Jaujard didn't want to take any chances.After the war, a new Louvre was opened to public with all of the museum's major masterpieces returned to safety. Miraculously not even one piece of art was damaged during the whole operation.

Jacques Jaujard was awarded with accolades by the French Govt.Main entrance of the Ecole du Louvre, an institution of higher learning in archaeology, art history, was named after him.He died of an unexpected heart attack in 1967.He had written a book of his philosophy titled 'Feuilles' which was posthumously published in 1974.