BUBBLE OVER BULB! How the first economic bubble took place ever in the world.

Tulips are synonymous with love in general.Each colour of this flower symbolizes some thing different. Red tulip symbolizes true love, while white one says "I am sorry" but there are few others as well which I do not know!

As we all know, The Netherlands is the largest producer and exporter of tulips and Petunia world wide.In Doha where I have been working, during autumn and winter, it is very common to see public and private gardens flooded with Petunia with varied colors, imported from Holland though Tulip is not grown there since climate is not favorable.

It was during our visit to Istanbul,Turkey few years back,that I knew Tulips originated from that country- not The Netherlands- which is the national flower to this day. In almost all the  wall hangings and painted porcelain tiles, sold on the pavements the beauty of this flower is very commonly displayed.It was from Turkey that Tulip was exported to The Netherlands by 1600, where it was an instant hit.

Having said about the beauty and popularity of this flower very few of us know that tulip- in fact bulb of the plant- is also related to the first 'economic bubble' the world has seen! The first economic crisis ever happened  in recorded history... forerunner to many crashes in stock market or real estate...now regarded widely as a recurrent feature of modern economic history. 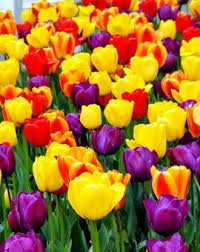 Booming economy in Amsterdam..
The Dutch East India company- first ever IPO- was formed in 1602.The intention was to trade  with Asian countries such as India,Indonesia and Far East where spices and other commodities of resale value were there.The Dutch traded with Kochi, my home town as early as in 1603 mainly for pepper.The company was very successful which led to a booming economy in Amsterdam and other cities in The Netherlands.The people who invested in the company shares made a fortune.They started looking for similar opportunities of making 'quick money'.

Tulips enters Amsterdam...
Tulip introduced to Amsterdam found an instant welcome by the rich in the society. The bright colored petals of the flower along with the fact that the plant can withstand harsh north European climate made it very popular among the people.Tulips which heralds the spring season, are the first flowers to blossom each year, some times while there is still snow on the ground.

Tulips contracted by a virus....start of a mania!
Around the year 1634, for unknown reasons Tulips were contracted by a virus in certain areas.It was non fatal to the plant but pattern of the flower altered.Instead of one color the virus inflicted plant produced stripes on the flowers!People liked the altered flowers better than original.More the stripes, the value of the flowers went up!!Soon the prices of these particular bulbs went up in the market!!! 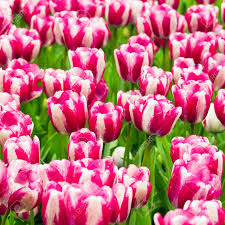 Tulip mania........few bulbs cost more than a house!!
Was it a natural obsession of people over striped tulips or an engineered one, it is never recorded in history.But people became almost mad over those bulbs which produced the striped tulips!Prices of the bulbs of the plants went up day by day.Finally it reached unbelievably high levels.In one month there was an increase of prices 20 times!!It is recorded in history that some bulbs of the plants cost more than that of a luxury house of that time!!A single bulb of the type Semper Augustus was sold for more than 10 times the annual income of a skilled craftsman of that time!The Dutch Government tried to intervene and tried to outlaw the commerce practiced but failed. 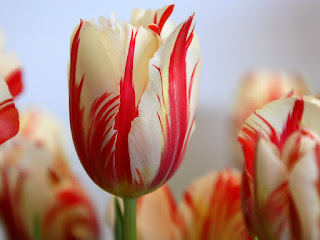 Semper Augustus, one of the most expensive sold.

Between 1634-37, not only the rich the madness spread to almost  everyone in Amsterdam.People of all professions and trades- white collared and blue collared or without any collar- started growing the bulbs!

Finally the inevitable happened. Over supply lead to lower prices.The tulip market crashed!People who invested heavily lost their money.So also dealers for sure, who went bankrupt!By 1640 the mania was completely over.Since then, as we all know hundreds of economic bursts- large and small- might have happened all over the world.I am sure this will continue in one form or the other since greed for money among humans cannot be stopped.