COMFORT WOMEN .....REMIND US HOW BAD HUMANS CAN BE GIVEN A CHANCE!

It was while in Seoul, S.Korea in 2016 that I heard a serious allegation about the subject first hand. The friendly face of the tourist guide over there changed to grim while explaining days of Japanese occupation over their country.   When he tried to describe the plight of 'comfort women', he was highly emotional! He didn't try to hide his hatred towards the Japs for all the atrocities they committed in occupied Korea.

This instantly reminded me then another interesting matter in history which I read in 'Readers Digest' few decades back. Soon after Pearl Harbor attack by Japan, many Japs in US used to be physically assaulted by the Americans during the days to follow. Koreans looked the same as Japs for the Americans, hence got wrongly attacked. In order to sort out the problem Koreans used to wear big badges/banners on their shirts. The badges read-"I am from Korea. I hate Japs more than you do". I left the subject when I left Korea few days later.

A small news of unveiling a memorial for 'comfort women' just few weeks back in San Francisco which I came across again brought the subject to my mind.......A sad and cruel episode which took place in the world about which many of us may be still ignorant. How over 200,000 women were abused with no such parallel in history...... 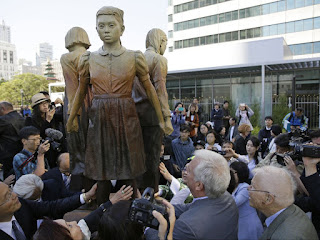 How and when..
Imperial Japan had a lot of victories in the WW2 initially, we all know. Japanese army occupied over a dozen - countries in Asia and Far East from 1931.The first 'comfort station'-sex slave station- was established in occupied China in the same year. Some of the Japanese army think tank thought establishment of such stations will lead to solution to one of the problems-rape, committed by their military men in occupied areas. They also thought that in such a scenario close interaction of their men with local girls will be reduced considerably, thus chances of leaking out of military secrets could be stopped! Effective prevention of venereal deceases among their army men was another objective.

Majority of such women were recruited from Korea. Other countries include Philippines, Indonesia, Burma, China and a small number from Japan itself. No definite number is recorded but not less than 200,000 women were deployed from the year 1931-1945 in various countries occupied by Imperial Japan! Records indicate that as big as 2000 comfort stations were set up where in women between 11 and 40 were 'employed'. Many of them were forcibly recruited where as many were lured by offering jobs in factories! To put it in legal terms, they were recruited by-deception, coercion and force.

In 2015,Japanese Government apologized to Korea on the subject. They also gave  8.3 million US dollars for the creation of a South Korean Foundation to support the surviving victims in that country with medical and nursing services. In turn Korea agreed to end all criticism of Japan on this issue. In spite of this agreement the problem lingers since Korean people cannot emotionally accept what the Japs did to their women...

Comfort stations in India?
Many forget the fact that a part of India too was under Imperial Japanese army occupation. That happened on 23 March 1942 when the island of Andaman fell to them while the British were ruling India. The Indian leader in exile, Subash Chandra Bose raised the flag of Indian Independence in Port Blair in 30 December 1943 on a flying visit to this island. Of course that was with the help of the Japs. But I believe he never knew that  here too comfort stations were established for the Japanese military men with girls from Korea, Burma and Malaya! 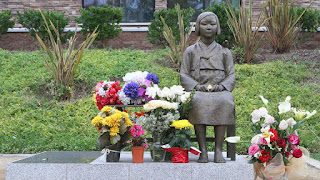 Comfort women memorials..
Once the war over in 1945, when the world came to know about plight of thousands of women thus abused, the civilized world stood stunned. One common thing that happened thereafter was erection of so many memorials for comfort women all over the world. Over 60 memorials are there in USA, Germany, China, S.Korea, Australia.....the number increases each year to remind us how bad humans can become given a chance......
Photos: Courtesy Google images.
Posted by Chacko at 10:34