WHAT IF GANDHI WAS NOT KICKED OUT OF THE TRAIN?

Pietermaritzburg..a bit difficult to pronounce,at least for an Indian.This is the place in South Africa where Mahatma Gandhi was forced to change his style and outlook towards life he had thus far......It was at this place that he decided to fight racial discrimination, he and other Indians faced in day to day life in South Africa of those apartheid days....ultimately to take the leadership of India's freedom struggle.Fetching freedom of India, that too peacefully, was an epoch making milestone in the history of the world which reverberated through out second and third world! He instigated the movement of decolonization in the world.

In hindsight when I look back,everything followed one after the other spread through six decades after Gandhi getting thrown out of a train with bag and baggage at Pietermaritzburg railway station! I would say this is where he literally kick started his journey of turning himself from Mohandas to Mahatma.....What would have happened if Gandhi was not kicked out from the train by the ticket examiner?Would Gandhi still fight the racial apartheid he would have faced?Would India have got independence through him? Would the philosopher,leader and writer in him  have come out to influence millions world wide?The question is a hypothetical one.I am trying to find an answer here on this occasion of his 148th Birth anniversary, which falls tomorrow(2 Oct 2017)....... 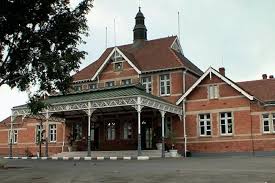 A 'post independence Indian'
I am a 'post independence Indian'- a person who is born after 15 Aug 1947, the day India became independent from British rule. Obviously I was not  an ardent fan of Gandhi like any typical 'pre independence Indian' who had to live as a 'coolie' class citizen in own mother country.Even I was critical of Gandhi's certain policies in my teens.But my decades of life abroad and close interactions with hundreds of non Indians including British made me to understand Gandhi better.I can vividly visualize how difficult it would have been for him those days but how cleverly he could successfully negotiate for India's freedom.Sheer vision and determination.That is what made the difference.At peak of his fight against the British, he was ridiculed as 'half naked fakir' contemptuously by Winston Churchill. Even Nobel Foundation of Sweden did not honor Gandhi for obvious reasons, the most popular man of peace ever lived in this modern world!But surprisingly it did not matter at all.In the end he became  the 'Mahatma'-great soul- for the whole world, while his popularity increases as time goes by.Since then the Nobel Foundation comes out very often with apologetic explanations of 'how-we-missed- him' and may continue to do so, where as Winston Churchil is on the way to the dustbins of history

Shy,timid...with three vows to keep...Gandhi off to England
Gandhi comes from an upper class Hindu family.In spite of that background, young Gandhi-Mohandas was his name- had an ordinary upbringing  and was an extremely ordinary student in studies.He was thrilled when he got a chance to go to England to become a barrister.His mother was a very religious person.She gave the nod to him only after he was forced to take three vows in front of a monk.Not to eat meat,not to indulge in sexual relationships(he was married already and had a son) and not to consume alcohol!!!But this did not stop him to be in western attire to join the ship at Bombay docks which took him to England.While in the ship he could hardly mix with fellow passengers being shy.As a strict vegetarian he did not take any chance with any unknown food available in the ship either.Being a sort of introvert he reserved himself to be in his cabin in the ship, eating mostly what ever brought from home!!

However after reaching England,Gandhi decided to look as an 'Englishman' keeping the three vows in tact he had with the monk.He brought well tailored fashionable suits and hats,took lessons in dancing, violin and in French.Everywhere either he failed or he did not like to continue .Few months later he decided not to ape English manners any more and decided himself to be a serious student.In June 1891 soon after he was admitted as a barrister he decided to return to India.Only major extra curricular activity he enjoyed during this period is that he became an active member of the local vegetarian society!While Gandhi was back in India as a lawyer also I do not think that he showed anything extra ordinary.He happily took up a contract to perform legal services of a wealthy Indian merchant in South Africa.

The fateful day....
Gandhi was travelling in the first class coach having a valid ticket.The train was running between Durban and Pretoria.A white man objected to his presence in the compartment and complained to the ticket examiner.Gandhi was asked to move into another ordinary bogie at the rear of the train meant for the non whites to travel.He refused.Gandhi was thrown out to the platform at Peitermaritzburg with bag and baggage.Richard Attenborough has well pictured the scenes in his film Gandhi(1982).

Gandhi was hurt and humiliated.It could have been a shocker having spent few years even in London.He moved to the retiring room waiting for the next train to come.It was at this time that his life changed.He was hurt mentally than physically which made him to think over the unexpected incident.He reviewed the situation all through the chilly night.Come what may,he decided to fight out racial discrimination faced by Indians in South Africa.This was  the start of his long journey which will be remembered even for centuries to come. The fateful day was 7 June 1893.

What if Gandhi had not been kicked out of the train?
Of course this is a hypothetical question.As absurd as asking what if apple did not fall on the head of Issac Newton.Having read about Gandhi reasonably well,I am of the opinion that he would have remained as a loyal servant of British India on his return from South Africa.I don't think that Indians would still be singing "God save the Queen " either now.Shall we thank the ticket examiner who threw him out of the train or even better, the white man who objected Gandhi's presence in the first class compartment?