Now everyone knows that New Delhi,capital of India is one of the most polluted cities of the world. At last people and Govt have come to senses and started making some drastic but bold steps to contain the problem starting from reduction and control of traffic in the city.Automobiles can be driven only on alternate days of the week depending on the odd-even registration number of your vehicle..Now that people have come to action and cooperated in this matter positively for the stipulated period, as years go I am sure that the city will be a better place to live in.There is no other way out!

The subject also took me tangentially to one of the famous land marks of the same city and of the country- the iron pillar which has been standing loud and clear for centuries, which I could visit few months back.How come this pillar made of iron withstood the brunt of extremes of weather and atmospheric pollution all these years?At a time when most of the European nations were in the grip of a looming dark age, how come this unique Indian metallurgical skill in black smithy could exist since 4th century ?Surprisingly such iron pillars exist in another places in India as well! 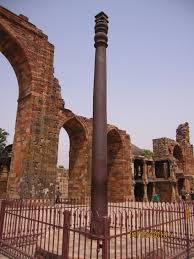 Bright and dark sides of ancient India....
Ancient India always stood ahead of the rest of the contemporary world in many fields of scientific innovations. That is the bright side.Due to class system prevailing in the society during the same period all these knowledge was restricted to a minuscule class of the Indian society and was never shared with any one other than this class in India until mid 19th century or so, forget about the rest of the world. That is the dark side.

Wonderful iron pillar of Delhi
It is a wonder that this pillar made of iron stand clear of any rust for the last 1600 years!The current location is in the famed Qutab Minar complex.The pillar is identified with King Chandra Gupta II who reigned in 402CE. The 7 meter high pillar with a bulb shaped base and ornate bell patterned capital has an inscription in Sanskrit mentioning that it was erected as a flagstaff in honour of Hindu God Vishnu.Originally erected in Madhya Pradesh in India, far from Delhi was brought to the current location by 1233.It could weigh over 6 Tons.For a long time the pillar was believed to be made of brass or any other alloy but in 1876 after detailed studies it was confirmed to be made of pure iron.

The bell capital of the pillar at the top end consists of 7 distinct parts as one can see in the photo below.Each part could be representing many factors which are still not known,I think.

Ibn Battuta(1304-1377)the famous explorer traveler has made a specific mention about this iron pillar as a wonder in his travelogue.

Technical explanation
The pillar is made of 98% wrought iron.The high content of Phosphorus- as much as 1%-against less than 0.05% as made today in such cases- and absence of Sulphur and Magnesium in the composition of the iron used in making the pillar is the reason behind its 'rustless' nature.The wonder is that the makers knew this technology 1600 years back! 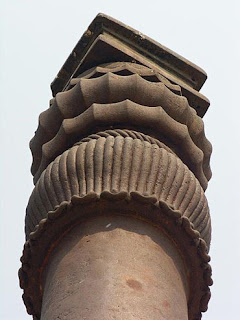 Similar pillars elsewhere in India...
I am sure that most of fellow Indians may not be aware that similar pillars of iron which withstood test of time exist in another two places in India. One at Dhar,Madhya Pradesh is bigger but in broken condition due to attack of invading armies, now preserved as such.Unlike one at Delhi, there are no inscriptions on the pillar but believed to be erected in the 11th century by Raja Bhoj.

Another iron pillar which is incredibly rust free is erected in front of Moola Mookambika temple which is located near Kollur,Kodachadri hill,Karnataka.The place is difficult to reach even these days and as such much historic details it seems are not known.