I have lived in Qatar for over three decades with occasional trips to India.It is left hand drive in Qatar while it is right hand drive in India.Always it was a bit uncomfortable for me in the initial few minutes after the change over in driving but used to do this very often,last being two weeks back.To be honest, after I reach Qatar each time the switch over is much easier than while  in India.From a chaotic-slow-with a lot of pedestrians-right hand traffic in narrow roads of India(except national highways), the switch over is understandably easier to  that of an orderly-fast- hardly any pedestrian-left hand -wider road traffic. In Qatar it is 'pedestrian first' on the roads while it is the last priority on Indian roads.It is no wonder only few Indians who have been living in gulf states,US or Europe, can drive leisurely on Indian roads.Also one will find hardly any foreign tourists driving in India!May be the fact that I started driving in India right from eighteen years and always made sure of the switch over at the earliest opportunity that I do enjoy driving whether in India or Qatar....

Random thoughts on the subject....left hand and right hand driving. 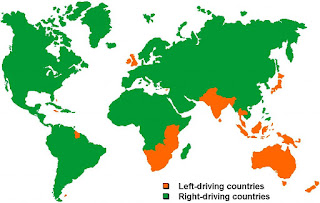 It's right mostly..
About 65% of the population lives in the countries with right hand drive and occupies 90% of the total roads as you can see in the map above.In the other 35% with left hand I need not tell you how much India is contributing in such a population....

How it all might have started...
When road was invented,it was more natural for a man to walk on the left side.When people started using horses on the roads also it made sense to keep left.It was more safer to hop on and off a horse on the side of the road.Then came the horse driven carts. In case of more horses pulling a cart, the driver sat on the left side rear horse to enable him to whip the horses.While they sat on the left side, the way most of the world do now, they preferred everybody to pass on the left, which conflicted with the left side walking set up.

Romans are known for the quality of roads they made those days.Roman soldiers marched on the left and Romans practiced to drive carts also on the left side.The first recorded history of keeping left or right ,I think came out as a directive from Pope Boniface VIII in 1300 AD.He declared that all pilgrims who visit the holy places in Rome should keep the left!

How it became right hand traffic and then left hand traffic...
Paris took the lead to enforce keep right hand traffic as early as 1794.Napoleon during his conquests made sure to spread this idea and for the same reason those who hated Napoleon wanted to keep the opposite-keep left hand traffic like Britain.In 1835 Britain made it a law which was enforced not only in their country but all their colonies like India, Australia and the like. One exception is in the case of Japan.It was never a British colony but the first railway system in Japan was built with the help of British in 1872.The British designed and executed the system in left side running.Eventually official law was made in 1924 to drive on the left side.Though for a short period after defeat of Japanese forces in world war II,it was made to keep right, Japs decided to revert back to keep left in 1978.

US went for keep right from day one.However It was Henry Ford with his model T that placed the steering wheel on the left side of a vehicle in 1908!

Worst accidents happened in a switch over...
As I have written already, the experience of switch over -left to right or right to left- is never easy.The first few minutes one can get confused and end up in accidents esp in a busy road. It is a tough job on crowded but narrow roads of Indian towns where many people think it is their private property! 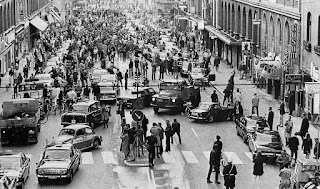 It was in Sweden that the worst ever situation came out in this context.Until 3 Sept 1967 Sweden was practicing left side but decided to change it to be on par with driving in neighboring countries with land borders like Norway and Finland.The authorities took a lot of steps for this reason.It was named 'Dagen H'- Dagen means day and H is short form of right hand in Swedish.Old trams and public buses were with drawn,hundreds of new buses were ordered, new bus stops were constructed on the other side of the roads,new traffic indicators were placed,public was educated and cautioned through media....but still on the first day a lot of minor accidents took place and traffic was in total disorder in Stockholm.. as the above photo shows.
Within 6 weeks of implementation the traffic came to normal!

Engineered solution
A good example to make the switch over easy while crossing two countries with different ways of driving is set at Hong Kong.It was designed by a Dutch consulting firm and named as Flipper Bridge.It has prevented crashes when driving between mainland China where is left hand drive and Hong Kong where it is right hand drive.The bridge is in the shape of '8'. 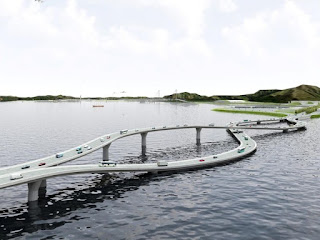