Technological advancement and economic nourishment mostly earned from colonization made many European countries concentrate in large infrastructure development projects in the 18th century.Soon after Europe made a dash to improve standards of living of the people and consistently improved over the years there after.India's turn comes only now. Better late than never.Rapid growth of Indian economy over the last two decades have resulted in growth of country's infrastructural facilities although not at the required pace.With such a boost in economy while technological skills and manpower are available in the country  such projects should have been taking place much faster in India.

I firmly believe that it is such infrastructure projects in transportation,water,sewage,waste management, electric systems,communications, health care....which brings up the quality of life of a citizen which is the bottom line for development.......more than availability of international brands in mobile telephones, computers , cars, junk food - which India has now in plenty!

Mass Rapid Transport System(MRTS) of Metro Rail are either in place or in the making in the first and second tier  cities in India, my home town Kochi included.Construction of a metro line which passes through the main arteries of Kochi has understandably opened up a lot of inconveniences to the public as of now.In order to keep the minds of the city dwellers calm during the current difficult construction period the authorities have smartly put up sign boards all over related an old proverb related to Gooseberry: Bitter First..Then sweet!! Some musings related to metro rail which most of us think  is a product of 20th century but it is not ..... 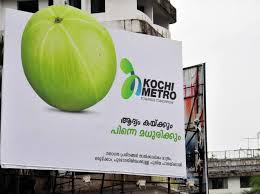 From James Watt to Charles Pearson.....From Metropolitan to 'metro'...
We all know that James Watt is credited with the invention of the steam engine.That was in 1784.In 1804 Richard Trevithick made the first locomotive and demonstrated but failed in getting the recognition and died a poor man.George Stephenson invented the first train as a vehicle of transportation in 1822.All these inventors are English with technical backgrounds.But it is Charles Pearson of England who invented the concept of first metro rail in 1851. He was a lawyer and solicitor to the City of London who was primarily responsible for promoting an idea of underground railway which all thought was a crazy idea!He mooted this idea to reduce the traffic congestion London had to face those days.John Fowler was the engineer who transformed the concept to reality.

The first metro in the world was again in London.It was in 1863 under the name of Metropolitan Railway.Thus the abbreviated word 'metro' originated from it which became popular the world over when Paris Metropolitan was opened in 1900. 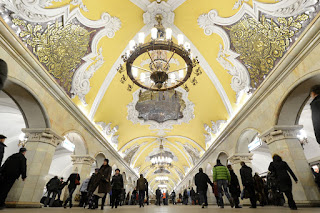 One of the stations at Moscow
Europe,Americas...
Second to London,surprisingly it was Istanbul which went for a successful metro.That was in 1875.Budapest,Berlin and Athens are the cities in Europe which had earlier metro systems in Europe, followed by all cities of the continent.Moscow had it much later but now it has the most beautiful underground stations anywhere in the world with all the paintings.Boston followed by New York City are the first two cities in US to have metros in place before it was introduced to most of the  cities there.To the best of my knowledge only NYC subway system operates 24/7@365 days a year while claiming to have maximum number of stations anywhere in the world!! Buenos Aires of Argentina has a metro as early as 1913 but other 7 or 8 South American countries had them much later. 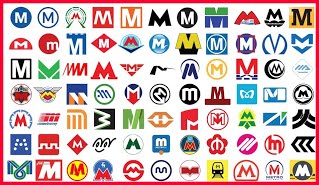 Asia..much later but with many 'firsts'...
Oldest in Asia is one at Tokyo although much later than it was available in Europe.It is generally believed that the most efficient- punctual to the second for years- metro system in the world as of now is also at Tokyo.Metros in Japan are generally busy and no eatables or cell phones allowed.It is owned,managed and run by private companies.The longest and busiest metros of the world are in China- at Shanghai and Beijing subways respectively.The metros where  wifi is available are also in Asia...at Hong Kong and South Korea.I understand that at NYC also it is implemented.

In India it came to Calcutta first followed by New Delhi.Now more than a dozen cities have them or about to get it.I am sure that in another twenty years India will have it in more than 50 cities, if not more.

My first experience in a metro was in 1978 at Rome.That was when I made a brief visit to the famed city on my return trip from Tripoli,Libya after a short assignment abroad.Since then I had the chance to be in many metros world over.While admiring different types of stations and carriages I never thought it will come so soon to Kochi,my home town which has been shy to court infrastructure projects in one pretext or the other.Now it is in the making and expected to be operational in another one year or so.When it will be available with its turquoise green coloured coaches, I am sure it will be a hit among Keralites, the same way Lulu shopping mall which opened here 3 years back revolutionized shopping,cinema and eating experiences of the citizen of the state,making a situation  where another 15 malls are on their way to the city!!