All along whenever we spend our annual vacation of one month in Kerala, India, it will be full of  various socioreligious events to attend. Marriages, betrothals, funerals and baptisms among relatives, friends and neighbours is inevitable. Except for the funerals all these social functions are not only very colourful but end with buffet  full course luncheons or dinners ! For funerals , only difference is that we wait for few weeks to do that !!Then you have the festivals at the temples and churches. While we are there some of the relatives expect to call on them at their homes on visits at their convenient dates and times! As such always we have to run against time since we have to cater to a lot of  personal and semi official needs as well. But it is these cultural activities and social bindings that makes India and Indians different to others.
During our last visit home during August-September which lasted 4 weeks, predictably  Geetha and I attended 3 marriages, 2 social functions and unpredictably 3 funerals .But one social event was unexpectedly outstanding. It was a 'NAVATHY' celebration- an event marking 90th birth day - of my aunt Dr.Achapilla Joseph,which turned out to be an evening to be remembered  for all......

Octogenarian/Nonagenarian family
My mother and her three living sisters are octogenarians - in their eighties.Only living brother is a nonagenarian, at his 96! None are senile and keep healthy for their ages. She had lost one of her sisters at 91 and brother at 86. Father and mother died at their 93 and 84 respectively! When one of her sisters - my aunt- valiamma turned out to be 90 and her brother Valliappa 96 recently, we the close relatives of the next generation obviously thought it is time for a celebration. It was decided to limit to a  direct family members' reunion of 4 generations, than going for an public affair, although my aunt is a known person in the society and in public.
'Appammai'
Appammai, that's what I used to call her, is a professional gynaecologist who served the Indian society through 3 hospitals for more than half a century. Professionally qualified and having worked initial years in Christian Medical College(CMC) ,Vellore she chose to spend her career in Jubilee Mission Hospital ,Trichur and later Lal Memorial at Irinjalakuda where she is put up. I shall refrain from what she has achieved for the hospitals she had been working because neither it may not be fair or I am not  qualified in that field to say that .But hers was an house hold name in Trichur district among the ladies particularly at her hay days, probably for 25 years!Other than her professional capabilities,best of her quality which anyone will admire is her simplicity.Her looks,attire and approach to life  is very modest and have been practicing her profession with a 'Mother Theresian' zeal!She shunned publicity of any sort all along her life and never bothered when hardly official awards of any sort from the Govt. or NGOs  come her way. Her patients made her world ! 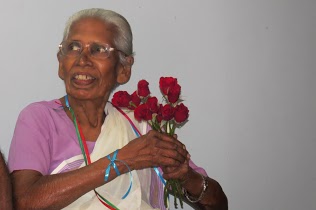 All work and no play might have made Jack a dull boy but not Appammai. Not only she spent most of her time in hospital but in the house also she was proactive with all the inmates. She interacted very well with her relatives, friends and neighbours. Still she does.  She was an avid reader whenever time allowed her. Probably she must be the only doctor in the world who has been going to sleep, dressed well in a Saree with a properly combed hair so that she can rush to hospital as fast as possible on emergency calls in the night!! She used to drive her own car till recently.

An evening to remember....
For the evening to commemorate her 90th birthday, it was decided that there will be a dress code for the participants which is seldom practiced in Indian  social gatherings. But instead of going for western or expensive dressing , set mundu a traditional simple dress for the ladies was fixed since Appammai is fond of such a dress and men for jubba and mundu/kurta which is again totally Indian. Albeit the fact that almost everyone had to go for new dresses, it worked out to be nice and a feast for the eyes. In a lighter vein ,this reminds me of a comment of Sarojini Naidu on Mahatma Gandhi "It costs a great deal of money to keep Gandhi in poverty"! 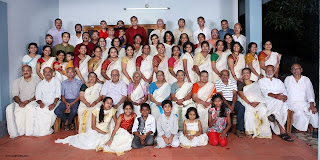 Family , mostly in traditional attire. Photo which was clicked on the date

Almost 4 months prior to the D-day, the date of 10th August 2013, was decided to facilitate all to come over especially for those who are outside Kerala and India .Over 60 members of exclusive Mookencheril and directly related families but spreading in 4 generations of different ages from infancy to 96 finally met . Generally in such gatherings 2 generations will be put off but here all could enjoy for some strange reason.
'Ponnada Aniyikal' - a customary garlanding function with a shawl in local tradition is nothing new.But when it was done to a person of 90 years old by her own sisters and brother aged between 80 to 96 it became a family history. Another novel idea was 'Taking salute' by her -  on a line from the 'babies' of the family- a dozen of them- who came to this world in her hospitals, might have seen her face for the first time than their own mothers, who followed the line to give the salute. The current age of those 'babies' now ranged between 6 and 52 is another matter!! 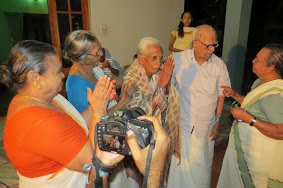 Thoughtfully the 'ceremony' was divided into to 3 parts. First was 'Kulathil kuli' -Taking bath in the 'natural swimming pool' or pond at the tharavadu- ancestral house . I used the term 'natural swimming pool' because such a pool which is there all along , has inflows from the natural springs and outflow when it reaches a level, round the year which makes the water naturally filtered, hygienic and crystal clear. In olden times this pond was used by all inmates of the tharavadu. Whenever I stayed there as a school boy I used to fully relish such baths .Kulam , the pond was an epicenter for fun for the children and it is to be noted that all our octogenarians and nonagenarians including Appammai were great swimmers and divers till they became 'old'!!  Although the use now has considerably reduced, it is well maintained. 'Kulathil Kuli was restricted to strictly those who were interested but in order to have a nostalgic touch, it was a nice idea to have Lifebuoy soap  distributed!

The second part which was semi formal meeting also went very well as planned. Third part was party games followed by a dinner catering mostly traditional dishes. But particularly one game - one among the crowd instantly suggested a new wild name for it-  went very well with the crowd which lingered with all till we parted. It is good to see that not only the old but new generations of the family also contributed and enjoyed the event which turned out to be an outstanding day for fraternity,fun, frolic and feasting.

Gone but not forgotten.....
While we were coming back to Kochi in the bus which we arranged to avoid driving cars in the night, my mind naturally slipped to Thavo, my late brother. I really missed him for the function which we attended. Whenever something really good or bad happens in my life since he has left us, I used to miss him, still.By this month one more year is over since he moved to 63,Ravipuram(http://www.jaisonchacko.com/2012/10/63-ravipuram-revisited.html). Gone but not forgotten!!