Last 3 weeks I am here at Kochi, my home town in Kerala... on holidays, enjoying the rains we are blessed with. This is something we miss in Qatar . For that matter I think Kerala state is having the highest amount of rainfall in India, three times higher than the national average. During the monsoon months of June, July and August every year we have almost continuous rain  which makes the state have 44 rivers with perennial running water . It is essentially these monsoons which make Kerala unique in the world . But for this monsoon, Kerala with a sobriquet  -God's own country- would not have been  what it is today including getting enlisted to a destination among 50 places of a life time to visit charted by National Geographic ....They have projected Kerala under the title 'PARADISE FOUND' !
Few musings which come to my mind as I sit and enjoy the 'live' rains from our glass house at Kaloor .....3 unique aspects related to monsoon in Kerala which one can find only here- almost- in the whole world ushers to my mind.. 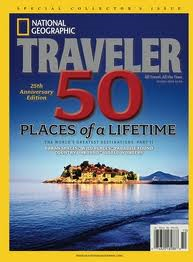 Any one who is born and brought up in Kerala if asked about the monsoon rains will be first reminiscent about the torrential showers in the first week of June when the schools reopen each year ! Mostly the monsoon in Kerala will hit depending on the date when thousands of schools opens after the long summer break ! If it is on first of June , one can expect rains to hit that day .If not, which ever is the day of reopening!!The purchases related to ' Back to school' will include an umbrella and/or a rain coat for anyone from play school up whether in a village or town . None will forget the 'drenched' experiences of coming to the classes . I am not an exception.  മഴ മഴ കുട കുട ! ( Rain Rain Umbrella Umbrella !) a caption made by an umbrella manufacturing company in the later years was an apt but descriptive of the monsoon months .But now I wonder how those sari clad teachers and office goers were managing these months ! 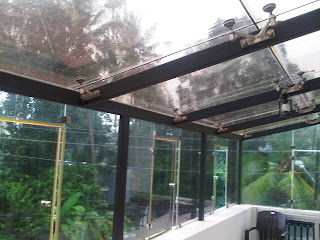 Chakara  in Kerala - no parallel in the world !
Rains are normal in many countries . And monsoon is not limited to India . But a rare phenomenon in monsoon only takes place in Kerala in the whole world - it is named Chakara in the local dialect Malayalam. As a result of mud bank formation in the Arabian sea during this rainy season, in certain areas of Kerala coast large schools of fishes throng together for some strange reason ! It can remain so for few hours or days when the fishermen harvest them with ease !Mostly it is sardines and prawns. This nature's gift  here is only one of its kind in the world which is yet to be known to outside Kerala . There could be a lot of potential in tourism to be tapped in this matter.
A common man's explanation is that during monsoon a lot of clay particles are brought to sea from the back waters through subterrean channels . Some areas of sea because of the large presence of clay particles becomes still and calm in an otherwise rough sea. The calmness plus the fact that more oxygen and nutrients are released in those areas from the clay make the fishes to rush to the spot which varies to few square kilometers. There are contradicting theory that this process of 'calm sea'  takes place because of the rip currents in the region . Could be there are more reasons, all I leave to experts . 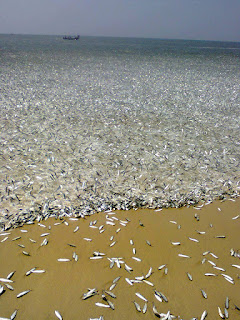 Each Malayali knows about this  from time immemorial but took for granted, it seems . A British had to collect the data and put in the scientific records for the first time . He was Robert C Bristow , one who engineered the Kochi port . It was Thakazhi Siva Sankara Pilla who narrated about chakara in his famous novel 'Chemmeen' . When Ramu Kariat who put the novel into a famous movie of the yesteryear , he had covered the impact of chakara beautifully. Chakara need not come every year but also can appear many times in a year !
In my young days when Kerala had lesser refrigeration facilities , I remember sardines used to be abundantly available at throw away prices during 'Chakara'. Literally it was 'throw away price' because if unsold they had to use as manure for coconut trees ! Even otherwise sardines used to be the cheapest fish which is available all round the year . This could be the reasons for sardine to be the popular fish used by the people in Kerala .
Inadvertently I think keralites, who eat a lot of fish , has benefitted from their 'love' for sardine cuisines. Omega 3fatty acids which are essential for the normal health and growth is most found in certain fish oil like sardine's . These fatty acids is uncommon in most of the vegetables, fruits , cereals , milk or bread . Omega 3 fatty acids has cardiovascular benefits plus it helps the brains to function better !! I used to think that all these malayalees have more 'common sense' thanks to sardines !! I may give a good rating for the 'common sense' of keralites which they all possess irrespective of the various religious background they hail from or whether they are rich or poor in all matters except politics and 'self ego'. I am afraid most of them may slip to 'common nonsense' mode when it comes to later two especially those who have not ventured out of the state, with no offence meant to none !! But once they are out of the state they are so different!!

Sardine is cheap all over the world . I used to like it although it is not considered to be a 'class' variety of cuisine. I remember an occasion years back when, in presence of  Geetha ,I selectively ordered for a choice of sardine dish in an official dinner in a five star hotel hosted by our Scottish hosts in Peterhead, UK in a reflex action !! I did not bother whether someone among the guests lifted his eyebrows seeing this !

Below sea level farming ..Another unique feature in Kerala...
Coming to back waters in Kerala , it is first place where it gets inundated during monsoon .Back waters and monsoon in Kerala are interrelated . Back waters  is a chain of lakes and lagoons linked by natural rivers and canals. It lies almost parallel to the Arabian Sea coast . It is just beautiful! What I want to bring out is about the below sea level farming system of Kuttanad , center of the backwaters. 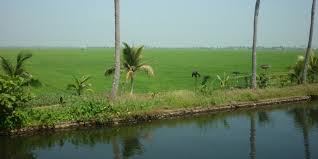 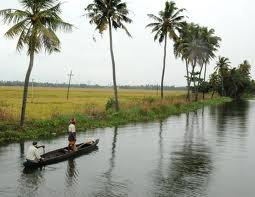 Kuttanad where below seal level farming is done. Note the level difference of paddy fields from the adjoining  rivers .
Except for The Netherlands this system of farming one will never find anywhere in the world. Protected by dykes and bunds all-round, paddy is cultivated in large stretches of land reclaimed from Vembanad  lake. Below the sea level by over 1 meter , paddy is cultivated three times a year ! Kuttanad , located in the the center of backwaters remains the rice bowl of Kerala even today albeit food habits of Keralites are drastically getting changed.
Paddy cultivation requires a lot of water . Normally water is to be pumped in to these lands for the purpose .But in Kuttanad water has to be pumped out of paddy fields to have the right soil condition for the paddy to grow . I don't know when this practice, unique in the world except for The Netherlands started but for at least for the last 150 years it is on.

When it comes to rice,again malayalees are different.They eat only 'boiled' rice or brown rice or parboiled as it is called where as others in the world eat normal polished rice.'Boiled' rice is rice with bran -rice partially boiled in the husk .This has been the habit for centuries for keralites .Uncle Ben , the most popular branded parboiled rice in the world , made in US, came to existence only for the last 50 years or so. But taking the advantage of  international acceptance of brown rice, it is the most popular brand,now that people are encouraged to eat brown rice for health reasons than polished rice . Kerala's sub sea rice should have been branded and made popular by now .Better late than never , hopefully Kerala rice manufactures/exporters can take a lesson here,I think.
'Vallam Kali' ...Snake boat races
Towards the end of monsoon season in Kerala , just before harvest festive season commences it is the time for many boat races which takes place in Central Kerala ,again in the back waters. Although boat races exist in many places elsewhere , the shapes and pattern of the boats used here in the race makes it unique in the world. Snake boats are called thus because of its shape resembling a head of a snake . History says that many local erstwhile rulers in and around the backwaters used this pattern of boats especially to attack others' naval forces and drown them, in use at least for the last 400 years! The length, breadth and shape of this boat made out of timber of special trees, are designed and made only by talented master carpenters. 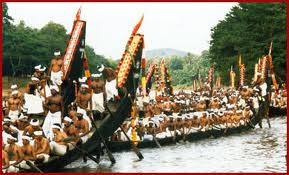 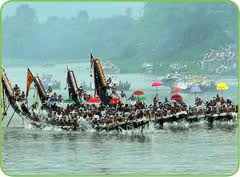 World class resorts at affordable prices  make this destination much sought after . Only difference I could see here and Europe or Far East is that it is better to take a conducted tour than not. Do not visit unless you have arranged everything which can be easily done from anywhere in the world. One will find the climate a bit humid but that is what  makes Kerala looks all green! Having widely travelled all over the world I always recommend a trip to India and Kerala .It is worth it!!National Geographic is fully correct - Kerala is a place of a life time to visit!!