Greek mythology , Philosophers , Olympics... were all well known to me . Greek salad , Olive oil , Wine ...were reasonably known to me ....I did not know about Ouzo, the local Greek liquor. But the info that one of the best pistachios ( they call it -  fistiki in Greek ) of the world is grown in Greece was a news to me and Geetha having lived all these years in the middle east. A short trip made by us recently to Greek saronic isles of  Hydra , Poros and Aegina was a marvellous experience.......

As a teenager , during pre Internet, pre TV days ,  I used to enjoy James Bond movies because of the action , presentation of new 'scientific gadgets' , scenic and exotic locales and beautiful girls. Still I do , Skyfall being the latest. It was scenes of  one of such movies that enchanting beauty of the  Greek islands' was registered in my mind for the first time . Prior to that , I have vague memory of scenes (photos) of those islands, while I was in school , which has come in travelogues published by Readers Digest, my appa used to subscribe. When the cruise liner Playtera Ton Ouranon left the shores of Athens , it was house full .  Mostly European crowd  from Spain , Italy , France and Balkan countries . From Asia it was mostly from Korea  . Few Americans .  Hardly any Indians . Surprisingly more than three fourth of the crowd in the ship was upper middle aged /old ladies of different shapes and sizes - as if there is a conference for such in one of the islands!!  ( യൂറോപീന്‍  അമ്മിചിമാരുടെ  സംസ്ഥാന സമ്മേളനം ?)Thankfully they were all decently dressed!! Aegean sea was calm , slightly cold breeze was blowing.

The ship was a typical vessel used for such purposes , a bit old but well maintained . It comprised of three decks - the upper , the level 1 and lower deck where the dining is located . Passengers can sit and rest any place as they wish or move around , lunch included . All beverages /sandwiches/water are to be paid extra, for which outlets are conveniently located in all floors.
Hailing from Kochi , sea and ship is not something new for me .First two hours was boring for me , since the ship was cruising in the mid sea with no land to be seen near . . May be to contain that , the ship had arranged live music and dance in the upper deck during that time . But as we came nearer to different islands , the scenario changed . Tens of islands started to emerge from no where . Hilly landscape with not so thick vegetations. It seems there are numerous islands in Greece . Some are  habituated but many are not ,all earth quake prone areas. Each island is different to another in life style , I am told. 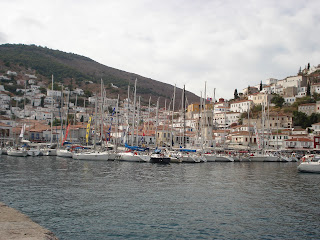 As we approach the island , the scene of a natural horse shaped harbour -  full of old fishing boats and modern yachts, lined up with shops , taverns and restaurants , mostly single storied , narrow stone laid curved roads going up to the hill , old typical Greek villas located in the hills - is definitely something any one will enjoy. As we got down and walked , the scenes became more enjoyable . Each building whether a shop , bar , hotel or home has its charm .No wonder a lot of Hollywood movies are filmed here including one of Sophia Loren .

One old  church building was  standing out among the others , which all stood in harmony with the landscape . There are no cars or buses in Hydra . Means of transportation is either by donkeys or bicycles .Of course one can walk. Population is around just 3000. 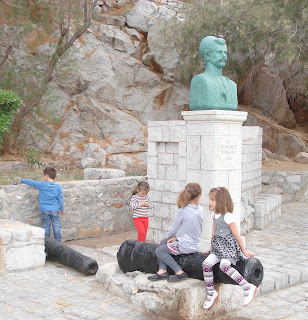 Harbour is the heart of the village .We could see a fisherman selling his catch live in a boat. A family of mother and two children were  fishing with rods right in the harbour . As we walked to the museum , a statue is prominently displayed - around which local children were playing with the old guns -  that of an admiral who played a major role in Greek war of Independence , who was born in that island.

Poros is another picturesque island . The harbour road is lined up with cafes, taverns and  restaurants . Orange trees are planted in a row by the side of the harbour which again full of yachts and fishing boats.    Slightly bigger and busier than Hydra , the population is less than 5000. A historic clock is imposing on the highest point below which there is  a sort of court yard  . For some reason for me , Hydra looked more closer to nature than Poros. 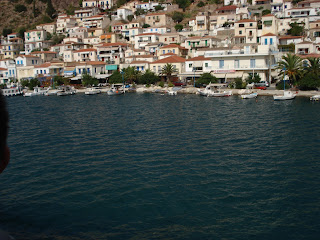 Aesthetic Aegina
Aegina is an island not far from Athens . It was a sea power in the by gone era which was a rival to  Athens.As the cruiser approaches the island , the scene is just beautiful . The harbour is lined with shops and restaurants ... with a church having typical Byzantine arch dome for the roof , against the background of  rocky hills . After hoping into a bus , which is part of the cruise , we were driven to the hills  for sight seeing. As the Volvo bus started going up the hill through the narrow but good roads , one will be attracted to view  vast olive and fistiki gardens . Pistachios here , the  guide spoke in length,  is one  of  the  best in    the world , can rival those from Iran and surrounding countries in quality and taste. The cultivation of the same is here since 1896 . Fistiki of Aegina has become so important to Greece that every year a Fistiki Fest is  conducted attracting all from the rest of the world during harvest time.In 1996 the name Pistachio of Aegina was registered in the EU gazette as a Protected Designation of Origin (PDO). 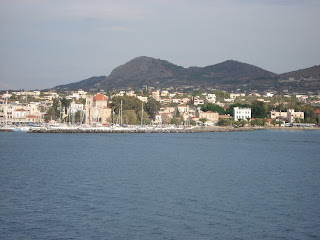 Dilapidated pre christian temple of Aphaea can be seen on the hill top  but what I enjoyed more than that is the view from the hill .Simply stunning as you can see below  . Another attraction of the  island is the church of Saint Nektarios , with its magnificent Byzantine architecture. Greek in general are orthodox Christians and unlike in some other parts of Europe , they  are theists. 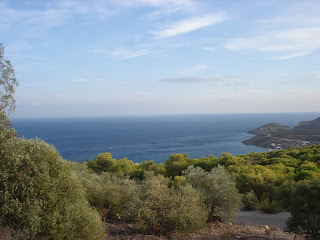 After few minutes when we boarded our cruise ship to get back to Athens , wind started blowing                  and  waves  rising . All passengers were told to get inside the halls and the doors were kept locked. The ship started swaying , to not that normal levels .To make matters worse , they were playing the title song of the film 'Titanic' through the loud speakers for  some reason ! Geetha looked a bit uncomfortable and showed the  same on her face . I was in the same state but did not show it . It was almost the same situation until we got back to main land. As we climbed down the ladder from the ship the captain and the first officer were  standing by the side, smiling  and telling each  visitor "Thank you. Good night". When our turn came the officer told us " Good night .Namasthe" with folded  hands.
As far as conduct of tours are concerned , I think Greece has come a long way up , may be due to decades of their exposure in the field of tourism . We felt the same professionalism in the arrangements of the tours in the  mainland whether it is  to Delphi (Oracle), Acropolis or  visit to Athens night  life .When
Mr. Nicholas Economobulous, chauffeur of the limo van , picked us up from 'Grande Bretagne ' at the exact time to drop us at the airport , the way he had collected us when arrived , he was in a conversation mode . He replied to me my general questions about the past and current status of Greece in acceptable English and contents . Finally when I asked "What do you know about India ?" His answer was crisp . "I know that it is a large country with large population .That's all ". But he then loudly said as if he knows something more about India ." Yes, I have heard about TATA " . Although India has not marketed well , Tata has marketed his company in Greece well, it seems !
Before we parted at the airport he asked us "Did you enjoy Athens?" We confirmed affirmative. He continued politely."I am glad to hear that . We want every visitor from outside world come to Athina ( Athens) and  enjoy the land ". Sure,  Athens assures that to any visitor.

Note : All photos are clicked by me .