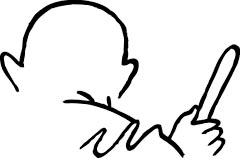 All the educated people anywhere in the world knows about Gandhi , I am sure. Apostle of peace of the twentieth century who led one fourth of the mankind to freedom from slavery, exploitation and colonization through totally peaceful means, the way world has never experienced !!! Not only limited to Indian sub continent, Asia or Africa, Mahatma Gandhi is revered as a symbol for peaceful means of struggle to get one's freedom and recognition among Americans and Europeans as well to this day(latest being President Obama's election campaign speech , 4 weeks back) .

But do you know that the 'famous' Nobel Foundation never officially recognized him in his life time and thereafter till this day? How come that? Is it deliberate or just a 'miss'? Is it fair from the side of an institution as 'noble' as Nobel Foundation to have closed their eyes all these years in this respect?

I am an Indian. A proud Indian. Nearly 30 years' of my overseas life has strengthened  'Indian' in me, simultaneously along with increased  respects for others, after meeting , interacting and living with thousands of others, travelling widely the world over. Having said that, here  I have tried my best to be a non biased reviewer of the facts on this subject, which are based all from authentic sources including from Nobel Foundation documents .

It is not that Nobel Foundation did not identify him. He was. He was nominated for Noble prize for peace 5 times - in the years 1937, 1938, 1939 continuously and then in 1947. Last was in 1948, 2 days prior to his assassination. Each time for some strange reason he was not picked up ﻿as the winner .

1937
Gandhi was one among the 13 candidates in the short list prepared by Norwegian Nobel Committee that year. Prof Jacob Worn-Muller who was the appointed committee advisor summarized his report on Gandhi  " He is a freedom fighter and a dictator, an idealist and a nationalist. He is frequently a Christ but then suddenly an ordinary politician". He also doubted Gandhi's ideals were meant to be more Indian than universal. He accused Gandhi that his struggle in South Africa was meant for Indians and not for the blacks  whose living conditions there were even worse !
Instead of Gandhi , that year the authorities decided to give the laureate to Lord Cecil of Chelwood of Great Britain.

1938 , 1939
Both years Gandhi was nominated but he was not even short listed! Interestingly only one Norwegian parliamentarian Mr. Ole Colbjornsen nominated Gandhi all three years of 1937, 1938 and 1939 !

1947
This time he was short listed.Nobel Committee Advisor Mr. Jens Arup Seip made the report on Gandhi. The report was not critical of Gandhi as in 1937 but was not supportive. Poor Gandhi !

1948
Gandhi was assassinated on 30 Jan 1948, two days prior to closing date of nominations for Nobel Peace Prize. The committee received 6 letters of nominations for Mr.Gandhi including from Quakers who was awarded with the Nobel Prize for Peace in 1947 and another laureate Emily Greene Belch! Gandhi was considered along with two other names. This time the report summarized thankfully as " Gandhi can be compared to the founders of religions"  .
As per the statues of the Nobel Foundation posthumous awards can be given under certain circumstances, hence it was possible to give Gandhi the Nobel prize. But in spite of this he was not given.
The committee that year rejected Gandhi's nomination with a strange finding - Posthumous awards should not take place unless the laureate died after the committee's decision has been made !!!! (Later Mr. Dag Hammerskjold , Swedish diplomat was given the Nobel laureate  posthumously in 1961 under the pretext that he died after committee has decided!). Instead in  1948 committee decided to make no award that year for the Nobel Prize for Peace on the grounds that " there are no suitable living candidates"!!!

The background
Until 1920 Gandhi was known to only India , South Africa and Britain. But then the news of Gandhi's struggle in India has started spreading to rest of the world- slowly but steadily, understandably so being those years the communication net work was not modern as of today plus he was hailing from a European colony. While some of the European renowned free thinkers , scientists and writers were attracted to his personality and  his unique movement of  ahimsa and satyagraha, few opposed, but many doubted ultimate outcome of his actions- independent India through peaceful means, which included few noted Indian leaders as well .
The first international recognition for him , according to me , surprisingly came from a country he never visited till then and thereafter in his life time .... America. TIME magazine chose Gandhi to award 'Person of the Year' in 1930. He was appreciated by them for leading the salt satyagraha, a 240 mile march to protest the imposition of taxes on salt by the British Raj. It is to be noted that Gandhi was the first non US citizen (including Europeans),first Asian to have come in the  list ever since TIME made such an award in 1927. ( Again in 1999 ,TIME chose Gandhi, one among the first three who influenced the world in 20th century. Next to Albert Einstein for their finding for 'Person of the century !!) 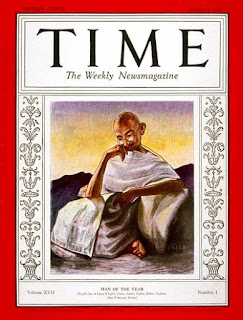 The biggest opposition to him was from obviously the British, although from not all. Churchill hated him and his peaceful disobedience to such an extent that  it is told that he favoured letting Gandhi die if he went on a hunger strike. When the British were forced to invite Gandhi to London to  have  talks for the first time in 1931, Winston Churchill told publicly " It is alarming and also nauseating to see Mr.Gandhi , a sedition Middle Temple lawyer, now pose as a fakir of a type well-known in the East, striding half-naked up the steps of the Vice-regal palace to parley on equal terms with the representative of the King Emperor ".Churchill never wanted to give up India, jewel of the crown under any circumstances and expressed his undiluted hatred for Gandhi who lead a movement exclusively for that. History taught Churchill and others how Gandhi out grew the Emperor himself in popularity among the world masses in the following years. In a way Churchill was correct in the prediction , Britain who was the epicentre of  world powers, steadily lost that position since 1947, when India gained her independence.

The reasons behind...
Nobel Foundation never awarded Nobel Peace Prize since its inception to an Asian till 1960.Till then, for the 112 years it was exclusively reserved for the Europeans and Americans. This could have been a reason - Gandhi was from Asia and from a colony of a European country...a sort of racist sentiments could have worked out with some.

Another reason could be the Nobel Committee did not want to antagonize Great Britain, the world's most powerful nation (at that time) against which Gandhi was leading the struggle for freedom.

Nobel Foundation might have under estimated then, how much Gandhi and Gandhism would be influencing the world in the years to follow .

Moreover, I wonder whether they ( the Western society then) really understood the real meanings of satya, ahimsa and satyagraha - all Sanskrit words with an Indian philosophical punch..honesty,non violence and strike - three strong constituents of the freedom struggle lead by Gandhi , which later had an unprecedented impact in the world ..which will continue.

One cannot pin point the exact reason behind , since all those involved in the matter in the Nobel Foundation in no more .

What Nobel Foundation has done since then...
The omission of Gandhi has been widely criticized since then including some the  committee members who succeeded  Most of the Nobel Laureates for Peace since 1948 have explicitly made their points over the absence of Gandhi in the list, making the Nobel committee continuously embarrassed .

Not long after Gandhi was 'ignored', Nobel Foundation might have had the impact of it ,which must be still on. In order to contain that Nobel Foundation has taken many actions for the 'damage control' over the years.

Nobel Foundation has posted in their web site a very lengthy article titled ' Mahatma Gandhi, the missing Laureate ' trying to explain how it all happened. 'Eye on Gandhi'  an exhibition of archives at Nobel Peace Centre, Oslo  try to convey the visitors how Gandhi was nominated many times and " might have won the prize in 1948 had he not been murdered"!

When Dalai Lama was awarded the Peace prize in 1989, the committee said that this was "in part of tribute to the memory of Mahatma Gandhi .

The intentions of all these corrective actions of the Nobel Foundation are to be appreciated but definitely it falls short of the terrible but corrigible lapse it has committed.

And now ?
In 2006 , Gier Lundestad , Secretary of Norwegian Nobel Committee said " The greatest omission in our 106 year history is undoubtedly that Mahatma Gandhi never received the Nobel prize. Gandhi could do without the Nobel prize whether Nobel Committee can do without Gandhi is the question". No is my answer. Nobel Committee cannot continue to remain with its glorified intentions without Gandhi in the list for years to come. The gap will get enhanced in geometrical progression as years go by in spite of explanations in the web site and permanent exhibitions of explanations.

One cannot put the clock backwards. One cannot redo the history. But one can correct the mistake of the past with the present. I wish Nobel Foundation would do now in case of Gandhi, what it would have done if it had omitted Albert Einstein in the list of laureates for Science .
Honour Gandhi with the Peace prize posthumously as an extraordinary move, with a profound, profuse  apology . If there is no provision for that now, please make one. I am sure Nobel Foundation will have to do that . When is the only doubt , it could be tomorrow, after 5 years or 15 years or 50 years. Circumstances will force them to do that. And doing so Nobel Foundation is the winner and not Gandhi. I am sure that an esteemed organisation like Nobel Foundation who could establish such an organisation with the best intentions 112 years back, they know how to run it also. Sweden , known to be - of one of the best people, least corrupt country , one which enjoys the top quality of life in the world - will not remain as a mute spectator for long ........

No one can just miss or ignore a person about whom Albert Einstein wrote  "Generations to come will scarcely believe that such a one as this (Gandhi) walked the earth in flesh and blood " . 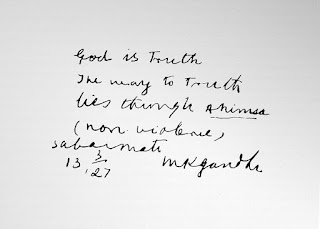