HARTrAveL ...Travel on a 'hartal' day 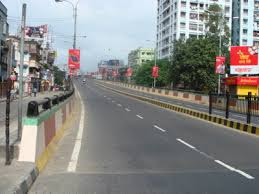 Kerala State (India) is known for the lightning strikes(hartal) called by the political parties . Hartal is a protest expressed by the political parties (representing people)  for a cause .It can be from 6 am to 6 pm or for the whole day . Everything will be on a stand still . No shops or markets..no offices,factories..no schools,colleges,universities,exams ...no banks..no hotels or hospitals ...no taxis,buses or vehicles on the road..hardly few will even walk on streets!!!No access to and fro  airports,railway stations,bus stations,boat jetties....Political parties will ensure this to declare that the strike was a 'success'!! This 'phenomenon' has been going in the state for the last 60 years .Knowingly or unknowingly Keralites are now used to this state of affairs or many have even started 'enjoying'.  Many look for hartals- paid leave without loosing a leave !

I know that I might have not done the wisest....and will not advise anyone to do the same exercise in future but at the same time wanted to share what I went thru....a rare experience only few in the world might have gone thru....driving all alone in day light  in a national highway for over 200kms from Trivandrum to Kochi (Kerala) driving through  most densely populated  districts in the world... NON STOP, NON HORN!!!!!

Perhaps we can tap  national and foreign tourists if Kerala , Gods Own Country could offer such rare experiences which no others in the world can !!!

28 sept 2009
When we reached Geetha's house at Trivandrum in the evening only , we were told of the state wide hartal on the next day....All the  MalluTV channels were blasting the news-'breaking news'... with interviews with strikers- hartal to show solidarity with common man to protest hike in prices of essential commodities! At the same time, TV channels were competing each other in announcement of choicest movies and soaps for the next day...All the radio jockeys in the FM were airing the warnings on regular intervels about this hartal on the following day!One of them was reminding the listeners that soon the fresh chicken in the shops will be sold out and better hurry !( only later I was told that in many houses it will be ' chicken briyani ' for lunch on hartal day !)

Govt, as usual in these cases ,declared postponement  in dates for university exams,PSC interviews .....at the same time promised 'all help'to see that KSRTC buses ply on the hartal day and  to see that life will be 'normal'...Strikers 'requested' all to cooperate in closing the shops and desist from attending offices ,factories and driving cars.....

For many reasons I could not digest this and thought of returning to Kochi driving the car on the hartal day- alone. Geetha will join me on the following day in train as decided earlier.I thought of  making atleast  an attempt to protect my constitutional right to travel any day.May be years of my absence from this usual tamasha, enjoyed by most in the state ,might have triggered such a thought in me.Or I might have under estimated the consequences of making such a trip .You can imagine the pressures from all the kith and kin put on me- not to make such a venture. All in the house were asking me to abandon the trip .Chatten called me up from Kochi and advised not to travel that day.When I compared the demand of the corporate situations from time to time -at times not pleasant- which forces me to face in Qatar all these years while discharging my official duties, I thought this 'adventure' is worth a  change..

29 sept 2009
D Day.I chose the timing to be early afternoon...Already TV was showing live scenes of stone throwing at KSRTC buses at Kollam and Kayamkulam.....Had an early lunch,took a nap and started from Karuvelil sharp 1.30 pm.In Trivandrum city there were few private cars and two wheelers ..but as soon I crossed Srikaryam, a suburb the scenario changed...absolutly no cars or other vehicles.....no shops..even madakadas(petty shops) are kept closed...no pedestrians ....in the highway it was a deserted look .

Reached Kollam in just one hour . Crossed the town centre in few minutes which is usually full of congested traffic. Hundreds of fishing boats usually seen coming in and going out to sea at Shakthikulangara was on hold. Karunagapally ,Kayamkulam, Alleppy ....situation is the same ..deserted. The feeling of being alone in the world... was not  good. Everything around me is silent except the music I had switched on..Thought of taking a break but couldnot find even  a tea shop all the way from Tvm to Kochi....Police jeeps were there ,police officers standing in town centres with their walkie talkies and individual policemen were there scattered in other places.

Few vehicles showing the big signs-VIVAHAM (WEDDING), MARANAM(FUNERAL) -could be seen at times with either flowers or black flags hanging out from the top!!!I had a non stop,non horn drive..speeding  bet 90-120 km/hr.In flat 3 hrs- at 4.30 pm- I could reach Puthoor,Kochi.In 2.5 hours I  had reached Kochi city border when Geetha tried to contact me over phone...Hardly I might have seen 20 vehicles in this 200 km stretch and not more than 100 peaple in this trip which usually takes 5 hours plus.....

By the time I made a evening walk with chatten at 6.30 pm at Kochi ,streets were busy as usual with long orderly queues at you-know- where!!!!! As if nothing has happened!!

15 sept 2012. Today I and Geetha had to make another similar trip.Hartal was declared yesterday evening by the opposition political parties to protest today all over the state for the escalation of price of diesel .We had gone to Trivandrum to attend a wedding. We took a decision to return to Kochi as planned on the hartal day. Straight drive for 3 and 1/2 hours without hassles , we are back to Kochi. Only difference this time is the absence of my brother who would have shouted at me for taking such a trip !!!
Posted by Chacko at 21:56