Thousands of children might have written to Santa Claus asking for gifts all these years  ..It is not a surprise .But when such a letter ,unstamped is replied by Santa could be surprising. Read....

It is December once again .Month of Christmas. My mind goes back 25 years or so....what happend in a December long back..

When our children – Vinay and Vishal – were toddlers  doing their kindergarten/early grades, in one December in late eighties, Geetha (my wife) and I asked them to write a  letter to Santa Claus .They have to explain what sort of gifts they expect from Santa Claus for Christmas. The primary intention was to keep them positively  engaged during the holidays prelude to festive season , apart from the fact that this will help them to have creative ideas and communication skills..Naturally being a matter of gifts of their choice ,they responded very well. Vinay  after  discussing with Vishal wrote on a pad for both of them since Vishal had hardly started writing sentences. When Vinay asked the address of Santa to scribble on the envelope – I was not prepared for that - I just told something fancy which came to my mind at that moment – Santa Claus , “ Frost Villa”, Green Land ! 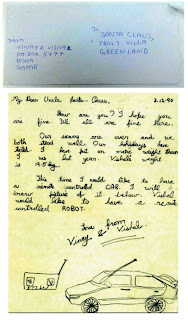 Letter from Vinay and Vishal (one of the previous year's)

Those were pre internet days and all communications were in letters, hard copies sent across the world through postal services.  In order to impress the children I  kept that envelope(unstamped)  along with other letters and Christmas cards. These material to be posted were picked up and kept in the dash of the car in sight of the children as I drove them to school, as usual.

Later the ‘modus operandi’ was that before I posted  these letters/cards in the post office, I took out their envelope and kept it safely in a cupboard  which they don’t have a reach. Two or three days prior to Christmas , Geetha and I used to purchase what they wanted, kept it in the boots of the car . On the eve of Christmas ,in the night when the children were asleep ,the gifts were taken out and kept near the small Christmas tree we had those days….In the morning the children were shouting with surprise and joy seeing the exact gifts they wanted !!!

This episode went on and on for few years, although at times the children had  raised their own doubts for the existence of a Santa .But the real surprise was reserved for us ,the parents  . When they got a reply from the Santa Claus !!! 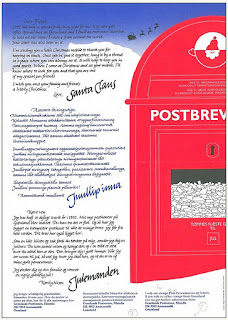 Once ,in  December 1992, I forgot to take out the envelope before posting. Instead I posted it along with other letters in the post box. I realized my folly as soon as it was dropped but did not think much about it .I was sure either it will be ignored by the postal authorities or returned notifying us for lack of stamps..In any case the address was fictitious – Frost Villa in Green Land !

While in the office one day I got an envelope addressed to Vinay and Vishal  clearly marked from Santa Claus of Green Land !!! When opened I could find a printed letter   and a Christmas badge !! One can imagine the surprise and joy of children (and also Geetha’s) when this was delivered to them. To this day this is kept safe in the house.

Of course on close examination it was found that the envelope for some reason ,although unstamped, went to Green Land and delivered to Santa Claus Foundation which was there. I presume one of their  activities was sending small gifts to children upon their requests – may be an information for parents of toddlers today as well. Small incidents can bring happiness in life……… 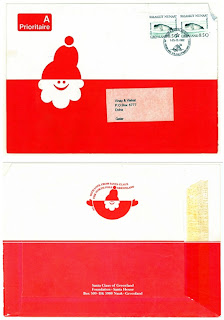 Envelope addressed to Vinay and Vishal
Posted by Chacko at 22:50