FROM THE DIARY OF A BRITISH SURGEON........ WHO MADE 'PASSAGE TO INDIA' EASIER!

The more I read about the history of India especially how the British East India Company (EIC) came to power and colonized the country, it becomes more and more intricate and convoluted to me. New unknown names and characters come to central stage all of a sudden from nowhere which the Indian historians have hardly mentioned, for reasons beyond my comprehension!

Such a name is Dr. William Hamilton, a surgeon who came to India in 1717.How come a doctor played a crucial and decisive role in the affairs of EIC which captured the control of India ultimately? Such a reflection can be still seen on the grave inscriptions of the doctor at the St John's church, Calcutta which is given below. It ends with 'he made his own name famous at the court of the Great Monarch; and without doubt will perpetuate his memory as well in Great Britain as all other nations of Europe'!

Here is  another episode on how Britain became 'great' at the expenses of oppression of Indians and systematic loot of  resources for centuries, one of the biggest benefactors of his country. How EIC became the bellwether of the British Economy? What's the roles of surgeons in the establishment of the domain of EIC in India? And at least in one instance EIC reps were forced to prostrate in front of the Indian Emperor asking for forgiveness in Child's war!! 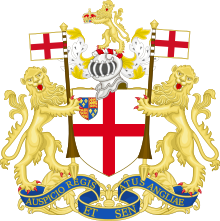 EIC... Coat of Arms
1600....EIC is born...
It was in the year 1600 that Queen Elizabeth I of Britain granted a petition signed by over 200 merchants of London allowing them to trade with the Eastern world. Thus East India Company (EIC) was formed on 31 December 1600, the first Joint Stock Company in the world. It was during the reign of Akbar, the Mughal emperor in India that this incident happened which was hardly noticed in many parts of even Britain or Europe, forget about India. After all having trading relationship with India was existing from time immemorial by Romans, Phoenicians, Greeks, Venetians, Egyptians, Chinese, Arabs...'Red Dragon' the first ship owned by EIC set sail to the East Indies(Indonesia) under the command of James Lancaster soon. Medical Officers were employed as ship surgeons who were qualified to treat the crew of the ships initially and later the staff of EIC at shores as they were not sure of the quality of medical service available on the lands they will trade.
'Red Dragon' docks in India... the first EIC factory
It was in 1612 that 'Red Dragon' came to India for the first time which was under the command of Thomas Best, who could get trading rights at Surat. In 1613 the first EIC factory in India was established there. Gabriel Boughton, the ship's surgeon is said to have saved Princess Jahanara, daughter of the reigning Mughal emperor Shah Jehan, from injuries due to  burns. The emperor was pleased and the incident acted like a catalyst for giving the trading rights and eventually to award duty free rights to EIC. By 1647 EIC had 23 factories in India. Money started pouring to London in leaps and bounds, in spite of few Anglo Dutch wars!
Initial humiliating set back for EIC... Child's war
When it was thought that everything is in order for a thriving business in India, the relationships with the Mughal Emperor Aurangzeb soured. In 1689, a Mughal fleet under command of Sidi Yaqut defeated the forces of EIC at Bombay when Sir Josiah Child was their Governor at London. The Company was forced to seek pardon with the Emperor by sending their representatives to prostrate in front of the Emperor for forgiveness. I don't think EIC had to do such an act before or after in the history of India! And I wonder myself why I did not know that all these years!
Soon after the company decided to concentrate at Calcutta to continue the business.
William Hamilton's role commences....
He reached India as a surgeon in the ship named 'Sherborne'. Later he was appointed as second surgeon to the British settlement in India in 1711.When the British Embassy started operation at Calcutta in 1714, he was reappointed as Medical Officer.
It was Farrukhsiyar, the tenth Mughal ruler who reigned in north India between 1713 and 1719.He also happened to be Aurangzeb's great grandson who came to power after assassinating his own uncle. He was a handsome man but lacked the brightness to rule his kingdom on his own, more depending on his advisors!
In 1715 EIC decided to send a delegation to the Emperor at Delhi asking for major grants for the establishment of the company affairs in India further. They were mainly (1) to purchase 38 villages surrounding the headquarters of the company in Bengal (2) Trading privileges in Bengal and (3) further fortifications of Calcutta. Why EIC decided to include William Hamilton who is a medical officer at the Embassy in such a delegation is not known. Could be that they remembered about the services of Gabriel Doughton in 1613 or might have heard about the decease the Emperor had which was kept as a state secret. 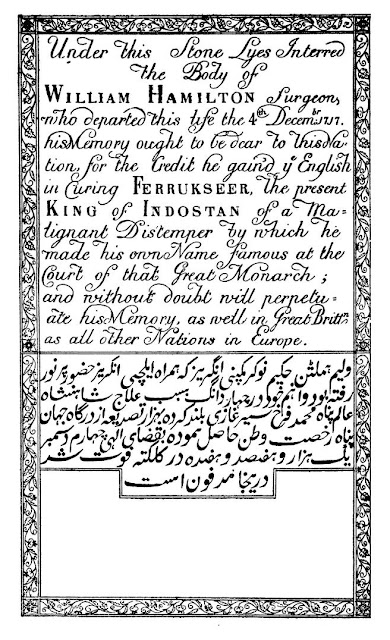 How William Hamilton succeeds in the getting the grants ...'Magna Carta' of EIC leading to British Raj!
Farrukhsiyar's second marriage was fixed with princess Indira Kanwar, daughter of Maharaja Ajit Singh, Rajput of Jodhpur. The conquered Rajput king wanted to make a treaty with the Mughals by submission to Delhi. But the marriage had to be postponed many times due to a very bad ailment the Emperor had on his groins. He had a bad swelling there and no indigenous medicines of Vydhyas and Hakims were effective. That's when William Hamilton reached Delhi and was consulted by the Emperor. The surgeon took a chance and made an operation which was successful.Needless to note that the Emperor was more than pleased!
The surgeon was honoured by gifting a lot of valuables including an elephant! But the unexpected bonanza was for the East India Company as the Emperor sanctioned the requests of the company in full issuing a Farman! This in hindsight turned out to be the 'Magna Carta' of EIC, eventually making the company loot India high and dry!
After the grant, Farukkhsiyar expressed his wish to retain the surgeon at Delhi but Hamilton refused. Dr. Hamilton died in 1717 at Calcutta, the same year of the grant while Farrukhsiyar was assasinated in 1719 at Delhi! EIC played the right trump card at the right time!!
________________________________
Posted by Chacko at 09:51