I am not about to narrate anything out of  Aesop's fables but on the contrary about some thing of a recent invention which has conquered our life style thereafter!

We all know what is Bluetooth technology at least for the last decade or so. It unifies devices. The technology has become so popular in our lives that the services of Bluetooth technology cannot be ignored all the time-phones, earphones, speakers, stereos, TVs, cameras, cars, tablets, game consoles...the list can be pretty long since I am limiting to devices I mostly use.

How come the non techy name 'Bluetooth' of all names, I have wondered often? I have read somewhere that late great Steve Jobs created the brand name 'apple' over a number of technical names after spending few months in an apple orchard! Steve Jobs thought that the name 'apple' ushers fun, spirit and not intimidating. And he went for  McIntosh , his favorite type of apple! In case of Bluetooth also there could be something drab like that I thought  but left the topic as such until I came to know about the real story recently. And it is worth knowing about if you don't know  yet!

'The teeth often bite the tongue, still it stays together' is a famous Scandinavian proverb. And the name Bluetooth  and technology which unifies devices also comes comes from Scanadavania but shrouded with its rich history. The name and logo comes from a 10th century Danish King-Harald Bluetooth Gormsson. Why the inventers- a technology company- went for an old and dead king with an unusual name is more than intriguing! 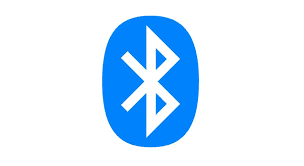 The race for innovation..

By early 1990s major international companies specialized in electronics were silently working on finding a technology to replace wired communications which totally eliminates the need for cables and wires. The companies in such a race were mainly Intel, Ericson, Nokia, IBM and Toshiba. It was Jaap Haartsen of Ericson, the Danish company who found out a revolutionary way to connect devices without cables by mid 1990s.But it needed further development .In 1997 the companies thought that it would be to their technical and commercial advantage that they pool their talents and resources and jointly decided to form a special interest group(SIG) to fine tune the technology. All these companies have been working individually on their own short range radio technologies till then.

The special interest group (SIG) thus formed had to decide on a  coded name of their secret mission temporarily. Jim Kardach of Intel pioneered in naming the group as 'Bluetooth'. That was the nick name of a Viking King named Harold Gormsson who lived and ruled Scanadavania around 1000 years ago. The king was the force behind in unifying Denmark, Norway and other parts to a great country. The king had a dead tooth which eventually became blue in colour and the history records that the people fondly called him 'Blue tooth' which eventually became more popular than his real name! All member organizations whole heartedly welcomed the suggestion of the temporary name since the mission of the SIG was also unifying various devices like the great king did for Scandinavia while a a tech savvy name -more market friendly- could be found out when the mission is successful.

The 'Bluetooth' technology is born...

The new technology which unites communication protocols is innovated by SIG in 1999. As decided by the group, they also considered many tech savvy names to replace the Blue tooth. Finally the proposed names which were short listed to just two- either Radio Wire or PAN (Personal Area Networking).But before SIG could take a final choice of name, the existing name of Bluetooth caught on fast with the public and customers to the surprise of SIG.

Comdex is the abbreviation of Computer Dealers Association and technical convention. It was a trade show related to computers and peripherals held in Las Vegas, US from 1973 to 2003.It was one of such greatest exhibitions on the subject in the world. In this context I also remember my official days in late 1990s and later where I had attended a number of famous trade shows world wide. Surely such an action and close interaction with live wire executives contributed a lot in understanding international business which in turn helped me in my contribution in transforming  a medium construction company to a well known successful corporate in Qatar, where I was a CEO for 21 years.

In 1999 show at Las Vegas SIG showcased their Bluetooth technology to the world. It was an instant hit! 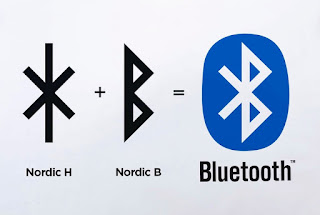 The magic behind the iconic logo...

The SIG while selecting the logo also showed complete honour to their great king Harald Bluetooth completely. Their logo is straight combination of the initials H and B of his names in Nordic runes shown as above! Obviously they chose the blue colour. Today this branded logo is recorded to have a 92% global recognition rate!

After all blue colour stands for serenity, stability, inspiration and wisdom. This I had learnt long back in 1994, while I got a chance to decide on the sky blue colour of the company logo from black and white ,while with Al Balagh group in Qatar.