Few months back, world renowned cathedral of Notre-Dame, Paris was severely damaged due to fire. I was a bit  concerned because I had been there twice and thoroughly enjoyed the masterpiece of art and architecture! President of France announced immediately, even before the the fire was put out if I remember right, that the cathedral will be restored while launching a campaign to raise money for the same. Within a week donations over Euro 1 billion had been pledged! Euro 880 million was pledged in less than a day!!

Out of curiosity I wanted to find out who were the prominent donors in the list. Among them Euro 200 million each was donated by families of Arnault and Battencort while Francois Pinault donated Euro 100 million who topped the first three in the list. If these names are unfamiliar to you, I am sure you will be familiar with their products! Definitely it was a surprise for me to see that they are the owners of the famous luxury brands of Louis Vuitton, L'Oreal and Gucci respectively!!This also prompted me to learn more on the subject since I know that  they are at loggerheads at each other not only in business but even in personal life. Brands they own are at war but all make money!!

Coming from a professional corporate background of heavy engineering construction industry where huge investments in money, manpower and technology are required, I know first hand that one is not assured of a profit. On the contrary if one is not professionally careful it can run to heavy losses. But it seems luxury brand industry is making huge profits..... 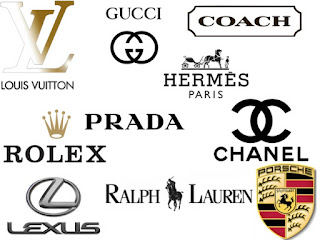 Luxury branded goods....
Consumers world over have become brand conscious now that huge amounts and efforts are spent to make them so. Seems no limit to such a scenario as of now, since corporate invest heavily in advertisement gimmicks. Now a consumer buy a brand first and ready to settle with the product later! It is no more stiff competition among competing brands as earlier but it is a war. A brand war!

I am not trying to to elaborate on new techniques in the marketing such as ambush marketing, viral marketing or bandwagon effect but trying to whip up your interest in products in which many of us are not aware that such a battle rages. We all know that brand wars are there among certain products in  automobiles, soft drinks, FMCG, computer software and hardware or courier services.

But more than any other fields I would say severest brand war exist in luxury brands- fashion, cosmetics, watches,leather goods......Just to have those brands which we think or falsely made to think will enhance our personality, we spent through the nose! No wonder most counterfeited brands in the world falls under this category!!Such companies spent a lot in advertising expenditure, nobody will reveal the truth but could be not less than 25% of sales revenue. The quality and design of  their perfume bottles which they market are always catchy and the best which makes any customer very difficult to throw away even the finished bottles.

Paris is famous for quite a few things. And luxury brand  perfumes and cosmetics are one among them. The feud between two brands- Louis Vuitton and Gucci and  their owners are well known more than common love for art objects.

LOUIS VUITTON(LV)....synonymous with luxury
LVMH(Louis Vuitton Moet Hennessy) is the largest producer of the luxury goods in the world- over 70 brands. Some of them are equally popular as LV-Dior, Givenchy, Fendi, Hennessy....I am told that after every seasonal sales, the products branded are LV are sent back to their factories in France. Such products are then burnt in order to 'to maintain the products' value' though people like me will never understand the logic behind such negative action. I feel that whatever be the compulsions fairness should be there in business as well. LV deals with wines and spirits also. Having headquarter at Paris LV has 3950 own exclusive showrooms around the world.LV will open its own Museum of Arts in Paris in 2020 costing $ 166 millon!!

The founder of the House of Louis Vuitton is himself in 1854. He initially started his business making wooden boxes covered with fancy canvas! How he started his business may outshine most of the Aesop's tales! Hailing from a poor background with a strict step mother, at the age of 13 he decided to leave his village in France for Paris which is 292 miles away. He didn't have any money to have a decent transport, he decided to walk all the way!!It took 2 years for Vuitton to reach Paris with many stops on the way to carry out odd jobs available to support himself. Reaching Paris he could get an apprentice job at a successful box making workshop where he learnt the skill of box making. Vuitton's stars started shining when he was appointed as the personal box maker of Empress of France, none other than the wife of Napoleon Bonaparte!

GUCCI....unique designs
Guccio Gucci hailed from Florence, Italy.His father had a small shop which made leather saddles for horses. He too did not go to school for long but left for Paris and London in search of a job. At London he was the lift boy at the famous Hotel Savoy. As I understand this episode in his life gave him a chance first hand to study on luggage and clothing of the rich customers of the hotel. This inspired him to start his own business based on his observations.

Once he returned to Italy he continued working with father for some time but started his own shop making leather bags and saddles in 1921 at Florence, which happens to be the fist venture of Gucci. The unique designs and excellent quality he maintained got got him certain class of loyal customers. Towards sixties and seventies Gucci expanded to Paris and all places known for  luxury fashion goods. In fact now Gucci is owned by an international luxury group in Paris named as Kering SA which also owns equally famous brands  such as Yves Saint Laurent, Boucheron, Ulysse Nardin........

It was Aldo Gucci, one of Gucci's three sons who designed the iconic logo inspired by his father's Guccio Gucci initials. Gucci will have its own art museum ready in 2020 costing $170 million in Paris.

The logic behind success of luxury goods...beyond Veblen effect!
House of Tatas, one of the richest but the best among Indian business corporate owns now Jaguar and Range Rover of UK. Tatas produces a range of class automobiles and trucks in India. Ratan Tata who owns the corporate had a pet dream fulfilled for poor/lower middle class in India a decade back.He introduced the car Tata Nano in 2009 at the cost of $2500! Incredible but true, he presented a small family car affordable to anyone in India using the latest technology. It was aimed to hit the Indian market with a bang! It did not.

After few years also when the sales didn't pick up for the Nano, the corporate made a survey to find out the reason. Their finding is that the company emphatically used the word 'cheap' in the marketing campaigns. Nobody wanted to buy a cheap car and look poor in front of others! To put it in other way, since the car was identified to be with 'cheap and poor', nobody wanted to be identified with it!!Even the poor!!!Though company tried to apply another marketing strategy realizing this, the sales went on decline until the production  is forced to stop. I think the logic of buying luxury brands by millions of middle class and upper middle class all over the world is the same but in the opposite direction. Ready to spend money to get identified with the brands of the rich! To satisfy or bolster self ego than the quality!!