It is very rare in modern world history that one nation's war is fought by another's army.This is exactly what the British did in first world war-using Indians which then comprised of present day's India, Pakistan,Bangladesh,Burma,Sri Lanka... Over 1.3 million(13 lakhs) Indians fought for their  masters and served them without really knowing 'how and why' of the war.They were deployed in alien terrains,climate..in Iraq,Palestine,Egypt,Aden,Iran in Asia...in East and West Africa...in Russia,Belgium,France in Europe about 100 years back.

Primarily they might have enrolled for the unbelievably meager monthly salary of Rs 11 per month(16 US cents ) but proved to be most loyal and brave soldiers who were obviously deployed for some of the most difficult jobs on the war fronts- digging trenches,as dispatch riders and gunners, supports to cavalry regiments........ 74000 Indian soldiers died! Almost same number got wounded!

Sadly they are forgotten now not only by the then masters but even by the present day Indians as well. I am sure that most of the Indians today may not be knowing what to commemorate India Gate in Delhi was built!Now India is one of the largest military forces on this planet.At the same time more than anyone else I wish each Indian knows how we were just hundred years- just two generations- back and how we really started as a military force!! 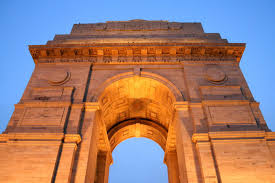 India in 1914
India was in a state of growing unrest politically when the world war I broke out.That was the time Indian leaders were after 'self Government' in their pursuit of freedom..British authorities sincerely feared that Indian separatist leaders would  use that opportunity to side with Germany to attain their aim.But their fears were unfounded. Indian National Congress thought that it is to the best interest of India then to support the British.India rallied with the British expecting to be rewarded at the end of the war with a self Government.

Unrest for freedom in India subsided and the British could move out their war equipment out of India.Princely states offered huge sums to the British.Some of the kings in India were the richest in the world then even richer than British monarchs!I remember that having seen royal palaces at Mysore and Jaipur, I was disappointed later when I got a chance to see Buckingham palace ! India had contributed million pounds to fund the war!!

Indians enrolled in the British Army in thousands.British practically handpicked the soldiers-known as Sepoy- from regions known for their valor-Muslims,Hindus and Sikhs alike and paid them less than peanuts!Tens of thousands of them who were selected were moved to the war zones after a brief training during 1914-1919. 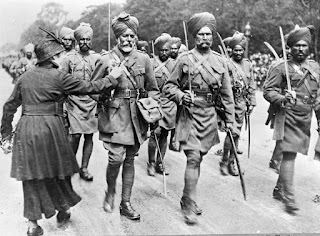 Vivent Les Hindous
This is what the French cheered as two divisions Indians named Lahore and Meerut arrived at Marseilles,France.Long live Hindus(Indians)!

The Indian army was multi ethnic,multi lingual and multi faith.Indians had two initial handicaps.They were not used to the climate and they were not trained to use the machines they were forced to use.But soon they got over these short comings.Indian soldiers were dedicated and known for showing incredible persistence and loyalty to their masters wherever they were deployed - in digging trenches,as dispatch riders,gunners...all in the war fronts.

When it comes to loyalty, I think even today Indians are known for it around the world.I have first hand information about this since I used to do business and closely interact with multi nationalities not only in Qatar but world over.When it comes to work culture of Indians-limited to present day India-it is far ahead to others  in general!This is one of the reasons professional and technically qualified Indians are employed in US and Europe. Nevertheless I am not sure about this trait of those Indians working in India esp in my own state Kerala!!

Indians fought for their masters in some of the the fieriest battles of world war I -at Givenchy,Ypres.....A lot of laurels including Victoria cross were presented to them for the services rendered.But  India's contribution to the war was never recorded in global history .Hardly any memorials left for the Indian soldiers. 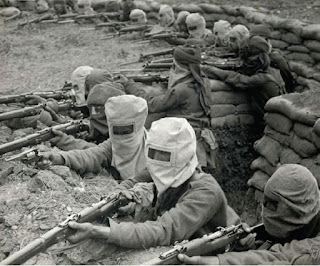 And peculiar problems they had to confront from masters....
Indians faced a lot of injustice there as well most of which present day Indians may not be aware of.The British ensured that hospitals which were treating wounded Indian soldiers were surrounded with barbed wire so that Indian sepoys cannot run away from the hospital!

And worse- the most senior Indian officer remained inferior in rank to the junior most English officer!!This reminds me my early days in mid eighties in Qatar. The British who have been ruling the country till 1971 put themselves advantageously placed in the official hierarchy in the Govt services before they left the scene.During late eighties and early nineties, without prejudice, I remember a lot of British who were under qualified or hardly qualified posing as engineers and managers working in oil,construction and other industries!But later that trend stopped as the professional inflow from other countries increased. A lot of genuine British professionals and qualified consultants started coming to the country by the turn of the century when the large development projects started taking place.The British export managers or CEOs who were on short business visits to Qatar were always professionals all along,I remember.

Letters of Indian soldiers were censored in spite most of them were illiterate or half literate.As such no memories or war memories are written by them and recorded.

War ends....
When the war ended,no hero's welcome awaited Indians.India did not get the dominion status either as promised by the British.It was a clear case of let down for Gandhi as he had to put next strategy to continue the fight for freedom.However the British decided to erect a memorial through Edwin Lutens, the famous British architect.Along with other associates he did the India Gate at Delhi.In 1971 the flame of Amar Jawan Jyothi(Flame of immortal Soldier) for the unknown soldier was lit there...... 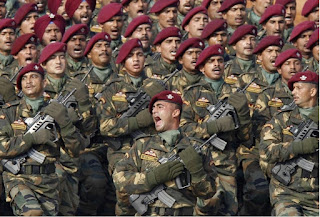