CRANE IS NOT JUST ANOTHER BIRD !

Crane is a common bird anywhere in the world except South American continent I suppose.In Qatar also it is hardly found being a country of desert nature.It is all over India especially my home state Kerala. As one travels by road or rail in the country side of Kerala especially around paddy fields one cannot miss sight of this tall, white bird mostly standing almost motionless waiting for the prey to be hooked. This long necked,long legged bird is graceful in looks more so when it takes off to the sky which is reminiscent of that of an aircraft.Otherwise this bird has not aroused any interest in me.But our recent visit to Japan did.Crane is not just another bird there.A folded paper crane represents something else.........a symbol of hope for peace...world peace!And there is a tragic eventful story behind, which each one of us-regardless of age and nationality- should know if not yet........ 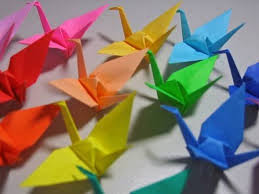 The Sasaki barbershop....and little Sadako
Sasaki was a professional barber in Japan.He had a barbershop set up in Hiroshima.A cute baby girl was born to Sasakis  on 7 Jan 1943.They named her Sadako. None of us would have remembered this date or name but for the events which followed.

That was the time world war II was on. Few months after Sadako was born, her father was drafted for military assignment which was not unusual for a Jap during that time.He was trained and posted as a junior medic who attended the sick and injured soldiers in the Army hospital at Hiroshima.

6 August 1945, 08.15 AM. The first ever atomic bomb was  detonated over the sky of Hiroshima. Little Sadako,her mother and grand mother were having breakfast at that time. Sasaki was away on duty. Their house was destroyed in the thundery flash which followed while they were thrown out along with hundreds of others in more or less similar situation.Her grand mother went back to the charred house to take something or for some reason but never returned.Somebody put little Sadako and her mother in a rescue boat.It began to rain.The rain left black spots on the clothes of Sadako...but they survived.

Soon the war ended. Gradually buildings were erected back. Sasaki could re open his barbershop in the heart of the city. In 1949 Sadako joined an elementary school as a healthy,energetic child.She loved singing and sports very much along with  her books.Very soon she became the darling of everybody.Everything seemed to be on track but......

Why the Americans wanted to detonate an atomic bomb over Japan and why at Hiroshima?
Some of my readers might have read this since it is no more a  military or political secret.I too have some years back.When I was spending my time around the parks,well preserved monuments and museum recently, those thoughts were haunting me silently at Hiroshima.

By May 1945 Germany had surrendered.Since then the tide of war had turned undoubtedly in favor of Allied forces.Still US wanted to use the A bomb against Japan!What I could learn from historical records is that it was a decision which was made by US as back as  September 1944.A successful test was hurriedly carried out in the deserts of New Mexico just 3 weeks before the weapon was actually used on Hiroshima!After all everyone knows how and why US was brought into the second world war!

The US probably wanted to use and see the effectiveness of the new weapon developed.Or they wanted a speedy surrender of Japs in order to minimize their own causalities. Or US might have been eager to finish off before USSR came to the scene to partner spoils of war as happened in Germany.

Hiroshima had the highest concentration of military camps,facilities and factories in Japan.Till that fateful day Hiroshima city never had been bombed unlike all other cities in Japan.While weather conditions also favored to target Hiroshima, it would be more easy for US to ascertain the damages caused! 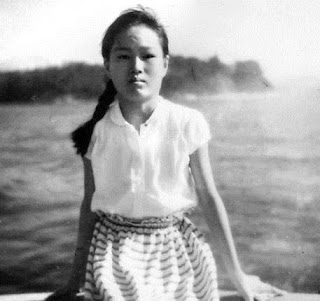 Back to Sadako...
Few years passed.In November 1954 she developed swellings on her neck and behind ears followed by purple spots on her legs.She was diagonized for Leukemia due to radiation from atomic bomb blast and hospitalized.

While in the hospital one of her friends named Chizuko told her something that gave her hope. In fact it is a Jap tradition.If she can create thousand cranes out of paper she will be granted one wish. Sadoko's wish was to have a world without nuclear weapons. Sadako started folding cranes one by one in spite she was suffering from acute pain.She could not continue for long. By the time she folded 644 cranes, on 25 Oct 1955 while the immediate family members standing by her bed she left this world peacefully.She was 12 then.

Her classmates decided to form a 'paper crane club' to honor her.Very soon word spread out.Students of 3100 schools from Japan and few foreign countries donated money to build a monument for Sadako. In 1958 Children's Peace Monument was erected to commemorate Sadako Sasaki right in the Peace memorial park,Hiroshima very close to ground zero!To this day from all over the world paper cranes are sent to Sadako which the authorities ensure to be hanged around the monument!!

I felt sorry for no reason and equally baffled to see that some of the Japs who were visitors to the Peace museum were silently crying while watching some of the  horrific photos and some of the 644 paper cranes displayed there !!70 years over since the tragic event but still.....I wish Sadako could make 356 more of paper cranes before she went away... 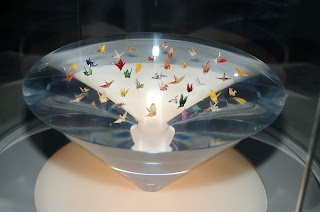 Some of the paper cranes made by Sadako which is kept
in the Peace museum,Hiroshima.