The sight of Bolghaty Palace on the tip of the palm fringed island,with the modern gantry cranes of modern Kochi port sticking out in the background is unique.Merging with the historical Chinese fishing nets and modern marina beside, as the ships come in from the Arabian sea to the port,is something which has to be experienced especially at sunset.Best viewed photogenically from the marine drive of main land Ernakulam, which I do very often these days,this could be one of the most scenic sea-bound spots anywhere else in the world- Venice,Stockholm,San Francisco... I do admire the skills of the Dutch who spotted this island as back as 350 years to build this palace, residence of their governor, which is now a known tourist hotel.

The Dutch who had captured Kochi(Cochin) from the Portuguese in 1663 lost it in 1795.Like other colonists the Dutch were primarily interested only to trade with India for spices but became the masters of the region,since they were smarter and we were stupid-at least then.They had to give up their prized possession after 132 years to the British.But in between they had contributed to India two good things knowingly or otherwise which we enjoy to this day - Hortus Malabaricus and Bolghaty Palace. 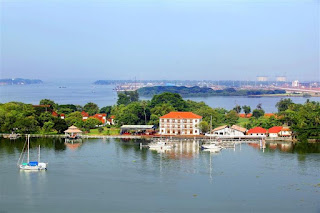 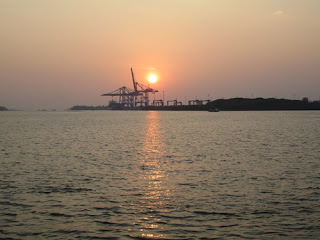 Bolgaty ....as viewed from the main land ... at sun rise and sun set

Dutch rule in India
Black pepper of Kerala,India was identified by the rest of the world as early as first century BC.Thanks to Hippalus wind invented at the same time, it invited fortune seekers and adventurists from the world over- Greeks,Romans,Chinese,Phoenicians,Arabs- to Muziris,a natural port of ancient days off Arabian Sea, only few kilometers from present day Kochi. Europeans came much later....centuries after.

The Dutch East India Company which was formed in The Netherlands(also incorrectly known as Holland) in 1602 for exclusively trading activities in the Indies- India, Ceylon, Indonesia...- was a success accomplishing its aim. Huge profits they could grab out beating all their rival East India companies and they settled in India displacing the Portuguese.Being a maritime company for trade, huge warehouses for storing spices and other goods of their interest-pepper,cardamom,coir,copra.... were established near the coastal towns of India. Kochi was their regional headquarters in India because it was a natural port,centralized location to collect spices of Kerala and the local king was more than friendly to them.

Comparing to Portuguese, the Dutch in India were better in many ways.They were protestant Christians but were not interested in religious conversions and tolerant to other religions unlike Catholic Portuguese who were not only interested in conversions but also successfully engineered a major split in native Saint Thomas christian church,one of the earliest christian churches anywhere in the world, believed to be founded in 56 AD by Saint Thomas, a disciple of Jesus Christ who visited Muzirus!  Interestingly even bells manufactured in The Netherlands were donated by the Dutch to Hindu temples like one at Varkala and Haripad which are still kept by them.

Hortus Malabaricus
The words are in Latin which means Garden of Malabar(Kerala). It is a collection of books based on detailed study of rare plant species existed in Kerala,India.It was published at Amsterdam between 1678 and 1703 in Latin, the accepted language for European scientific works those days. Written by Hendrik Adrian Van Rheede who was the Dutch Governor for the princely state of Kerala for 7 years, it contains 12 volumes.Along with Latin it used other scripts of Sanskrit,Malayalam,Arabic.,Portuguese and Flemish.

It is appreciative that descriptive botanical details of 794 rare-mostly medicinal- plants with illustrations were made and published by a foreign ruler about 340 years back! The Governor also noted down information on socio cultural conditions prevailed in this part of India.I am not a professional in Botany but what I could find out is that to this day Hortus Malabaricus is considered as  a scientific reference collection in its field. 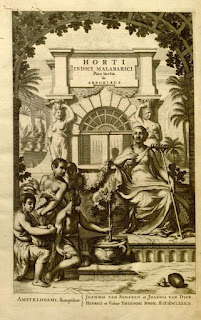 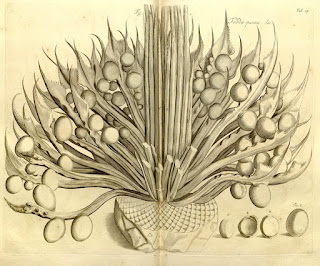 Hortus Malabaricus in print with a typical sketch

Nevertheless it has to be pointed out that but for few Indians namely Ranga Bhat,Vinayak Bhat,Appu Bhat and Itty Achuthan who had immensely contributed their knowledge for making the process of collection and studies of rare plants,such a publication would not have been possible. Illustrations were made by an Italian Carmelite priest named Mathews who was in and around Kochi then,which have come out strikingly accurate.

Bolghaty Palace
This building was constructed by the Dutch as the residence of their governor in 1744. Not only this palace is an architectural-mix of Dutch and Kerala traditions- beauty,I have to but admire the selection of the location.A spot of Mulavukadu island where all the three sides have the back waters. Until recently it was an island but now well connected by a bridge as well.

During my teenage, 'Ponjikkara' where the palace is exactly located was a favourite spot of youngsters not only to wander around the palace which had a golf course but also because of a famous shop nearby for toddy - a mild alcoholic drink made from Coconut tree. The place had to be accessed then by a ferry or by row boat which guarantees privacy from public in the main land was an added attraction for us students apart from the delicious food it served! 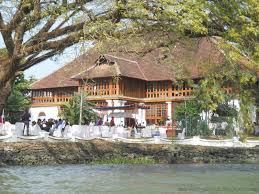 It is said this building with vast and expansive rooms is the existing oldest Dutch mansion outside The Netherlands.Kerala Govt is running it now as a resort keeping the traditional looks as it is and a visit  there is worth for anyone- value for your money.
Photos:Courtesy Google
____________________________________
Posted by Chacko at 10:29