A CAKEWALK ON CHRISTMAS DAY....

Merry Christmas to one and all of my readers!

A Christmas season anywhere in the world is not complete without at least a cake these days. Whether it is in the Americas ,Canada or Europe, Africa, Far East or Australia it is the same. Even in non Christian countries or secular countries where Christianity is comparatively a small community like India -with less than just 3 % of population- a Christmas without a cake is unthinkable for the last many decades. In Japan where Christians are limited to less than 1 %, bakers are busy with their trade mark  Christmas cakes during the festive month. I am sure that hardly few know that the only shortcake emoji exhibited in our smartphone emoji selection is a Japanese Christmas cake with a strawberry on the top! You can check that in your phone whether it uses Apple, Google, Microsoft, Samsung or any other known technology...

In fact it also may be interesting to know  that the first Indian who baked a Christmas cake in India was not a Christian but a Hindu by faith! In Kerala state where I live where Hindus, Christians and Muslims live together cordially, may be due to the influence of commercial practices of traders, a cake has become very popular among all communities. One Mampally Bapu , owner of Royal Biscuit company baked the first cake at Thalasseri, Kerala in 1880.

A cake has nothing to do with Jesus Christ or basic beliefs of Christianity. It is believed to have started much later in Britain in the 16th century based on traditional food there rather than with any church in the world. Thereafter it caught up with the rest of Europe and the world.

Please read on ...A cakewalk on this Christmas day!! 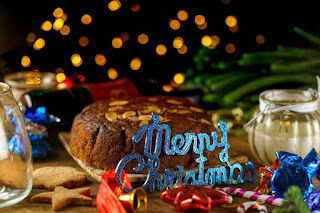 First day of each December while in Qatar...Thanks to Mr. Sherida Al Kaabi..
While in Qatar in spite of my busy official schedule even on Christmas days, I used to remember about Christmas  sharp on every first day of every December for many decades! Definitely it was not because of any religious reasons. In a country like Qatar where Christmas was not celebrated in public much in those years of 1980s and 90s, strange for many reasons, I used to see the Chairman of the company where I was  working ,signing on a number of Christmas cards to be posted to his Christian friends all over the world! That was sure to happen if he was available in the country on first of every December. Of course those were pre internet days. He also used to scribble down one or two sentences on the card to make them more personal. No wonder he had been a very professional and successful Ambassador for his country representing in India, Egypt ,UK and Scandinavian countries for many years.
Now also he seems to continue the same habit since it is only two weeks ago that my wife and I got one of such cards from him. Time has changed that we got into that list but admire his ability to share and maintain the warmth of relationships for decades with others. Still he uses the good old system of printed Christmas cards in spite of the fact that he is a computer literate. I think his silent but noble action is the best Christmas message one can give to this day- keep the warmth and love with all, irrespective whether they are useful to him or not in life any more!!That's Mr. Sherida Al Kaabi!! And this is only one of the many characteristics of Mr. Al Kaabi which I try to emulate. An Arab influencing me, an Indian was the last thing in my life I expected !!
How the first Christmas cake was born?
The evolution of Christmas cake began with plum porridge which was  an English tradition for dinner. On Christmas eve people over there started having oats porridge after fasting. Soon dried fruit, honey and spices were added to porridge mix which eventually turned into Christmas pudding!
By 16th century oat meal was removed and instead wheat flour , butter, spices and eggs were added. It became the first version of Christmas boiled plum cake. Later the rich started baking the cake. By 1830s eating a traditional plum cake on Christmas day became a practice in Britain and caught up with the rest of the world.
The most popular types of Christmas cakes in the western world..
Here it is not my intention to give the recipes of various Christmas cakes in the world and bore you. But it could be interesting to know that different types of such cakes remain popular by different names  in different countries.
While the traditional plum cake remains in many countries, in Germany it is Christollen, in Poland it is Makowiec, in Italy it is Panettone and in Portugal it is Bolo Rei. In France , Belgium, Switzerland and Lebanon it is Yule log cake (Buche de Noel).This reminds me that in Qatar most of the patisseries and bakeries are run by the Lebanese and during Christmas season how the Yule log cakes are exhibited in the shelves there more than traditional plum cakes!
And in  Japan....Emoji cake! 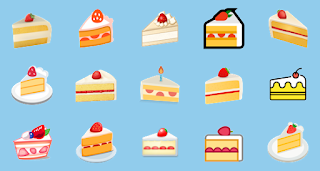 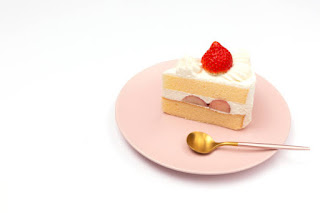 Christmas cake is very dominant in Japanese culture regardless of the fact that the % of Christians in the country is less than 1% of the population. It is sold in every other corner during the festive season right from November! The Japanese Christmas cake is unique- a light sponge cake covered with white cream and decorated with fresh strawberries. The Japanese liking for a Christmas cake started after the second world war devastation. There were a lot of Americans helping out Japan in the resurrection. And the poor Japanese those days were attracted towards the rich traditions of US! The Christmas eve in Japan is like Valentines day in the west. Would you be my 'Christmas' this year they ask each other instead of 'valentine' in Japan!
And the only cake emoji in our smartphones we use is Japanese Christmas cake! It is observed that the color scheme-white and red- of the cake represents the Japanese flag. Red strawberry for the sun while white of cream represents the background in Japanese flag! And why this particular cake in Emoji ? Because Emoji originated in Japan in 1999 created by a Japanese artist named Shigetaka Kurita which was patented. Emoji means 'Picture illustration' in Japanese language and he created the same for his employer firm NTT Docomo initially, but used by all.
First Indian made Christmas cake...
The  Christmas cake in India can be traced back to 1880.Mampally Bapu was a Keralite business man who used to ship bread, milk and tea to British troops stationed in Egypt. On his return to Kerala he started a bakery because he had learnt the art of baking biscuits while abroad mainly in Burma. His bakery was named as Royal Biscuit Factory at Thalassery, Kerala.
One day one Englishman named Murdoch Brown, a planter of estates brought him a cake which he had purchased while in England. He was requested to make a similar cake in his bakery. With the tasting and narration of such a cake from Murdoch , Bapu could bake a similar cake with dried fruits and other ingredients. That was in November 1883. 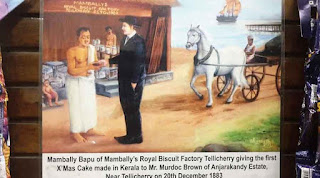 Mambally Bapu presenting the first Indian made plum cake to Murdoch Brown in 1883.
Another cake known as Allahabadi Christmas cake also is well known in India for the last many decades. It has origins from Anglo Indian kitchens of Allahabad railways colony. Goa's Baath cake is a delicacy there during Christmas which has Portuguese origin. Vivikam is a traditional Christmas cake of Pondicherry which was ruled by the French. Mandas of Mangalore is traditional Christmas cake  among the Anglo Indians. So also Cochin Jews and Parsees  have their own cakes in the season.
"You can't have your cake and eat it too" is an English idiomatic proverb, as we all know. Perhaps the only exception is a Christmas cake! Once again a Merry Christmas and a happy new year!!
Posted by Chacko at 10:05